Will one of the lobby updates include a new “salesman” for each shop (since most of them just use a default player model with a hat)?

I think one of the original plans for store NPCs was to have robo shopkeepers. I’m not sure if that is still the plan (Also backer rewards for personal greetings by NPCs)

good god no, i hope not

I just kinda hope that they get around to replacing the Fuse models soon. They’re ugly and were always said to be temporary.

It seems like that would be something they do near launch

Adobe Fuse is a program to make models with. Iirc these are default models and clothing from that program.

During the conceptual phase Mac did have drawings of the store merchants, they were robots with screens for faces. I swear it’s somewhere in the development sneak peak thread.
But ever since Frankie was added I’d hope for more unique models for all the store merchants, similar to the old concept art as it’s way more interesting and unique than what we have now.

EDIT:
Okay so the earliest thing I can find in the development thread is this model. Perhaps mac posted the concept art sometime in the discord and it was never actually uploaded somewhere. But I remember many variations of this robot drawn up. 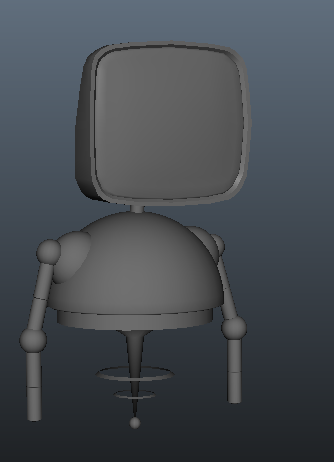 Mac stated he has an idea about replacing most of the Store NPCs with these Robots. Whether or not that comes to be realized is another story.

I’m not sure how I feel about this. The store clerk’s having personalities is a huge plus, and that’s hard to do with robots.

If a lifeless unspeaking vending machine can have a personality, I’m sure they’d be able to make a robot have unique ones each too.

I like the characters right now though, I don’t want them to all get replaced by robots. I could see the Upgrades people being robots though.

I think that’s the plan, as there are already robots at work there.

i think i like the idea of robot much more

The store clerk’s having personalities is a huge plus, and that’s hard to do with robots.

now with the current humans you cant change the face (well at least much if you can) only their position of the body.
with robots with such big screens for faces i imagine you could do a lot more.
like lets say that it has a neutral / welcoming face normally.
Then when you buy a small or normal amount (1-5,000 units) and leave the store menu it has happy more pleased face,
when you but lets say you buy 5k plus units worth of items, when you leave menu it shows a giant happy grinning face
or finally lets say you look at the shop and leave without buying anything, the robot will have a slightly sad looking face.

then each face can be different for all the shops, (glasses for the central circuit, clown nose or something for the toy shop, a chilled calm face with faint music notes around outside of screen, plasters and bandage on the DIY store nose / face)

I was all for robots replacing lifeless store clerks until they gave you the ability to talk to NPC’s.

That said Tower needs better npcs though. There’s too many npcs that’s just player models or props with hats or eyeballs. I get it’s easier to make but it just looks bad and lazy. (I’m looking at you holiday npcs)

I’m hoping stuff like the cat and hot dog npcs become the norm with this kind of creation process. A unique model with unique animations can really help build character. A hat and quippy dialogue doesn’t.

… well… The quippy dialogue really does help establish a character. You can’t get it all from visuals.