Enable pvp in Condos (Mortal players, health bar and weapons that do damage)

It’d be great if you could have PvP battles in your condos, be it either with earned/bought weapons (flamethrower, double barrel, 9mm) or with set weapons (Eg. giving everyone a 9mm, or a chainsaw). It’d basically just give everyone a healthbar, and having weapons do damage so people can actually “die” and respawn (Perhaps a custom respawn location would also be good if this is implemented).

Just the idea of being able to have a custom pvp arena, or just turn on pvp for fun would make condos far more entertaining to be in, and would add endless possibilities to create new types of condos with custom arenas. As of now Condos are basically to watch YouTube videos or listen to music together, this’d widen the possibilities

Perhaps having a store that sells basic weapons would be needed if this happens, as right now most weapons are locked behind milestones (Although I suppose not having a weapons store would make people more interested in milestone weapons, helping increase minigame players).

This way we’d actually be able to have chainsaw deathmatches in the basement!

I believe the devs have confirmed that we’ll be able to have PvP in condos at some point.

Macdguy has said before that he would like to add placeable pvp zones and other stuff for the condos.

I want to allow PVP through a PVP area that you can spawn for Condos.

It will probably be a part of the Condo I/O system which is a planned feature, in which they have mentioned wanting to add stuff such as monster spawners, working turrets, kill zones and other fancy things

That’s really neat. I have taken note of the suggestions in the video. Our end goal with the Condo is to have I/O support. Being able to hook items up with other items with logic, basically. When this feature is ready, you could connect buttons up to doors. But, we wanted to go more than that, so we have some pretty exciting Condo I/O logic stuff still to be announced. As for items, I do want to add teleports, teleport pads, locked doors (enter keypad to walk through them), trigger volumes (wit…

Sadly there doesn’t seem to be an estimate for when they will start working on it, so it could take a long time before we get this system.
https://trello.com/c/9K1aspsW/249-condo-i-o-system

Wow seems amazing. Though I also hope we’ll get the ability to just turn on pvp for the entire Condo too. Just with that it’d give so much more life to condos.

i know this topic is old, but are PVP zones still thing that devs are thinking of?

yes, i haven’t seen anything telling us otherwise. and as a small update, the devs have made some progress on condo I/O!

Weekly Dev Log for January 21st, 2020 Hello everyone, and welcome to the Weekly Dev Log for January 21st, 2020, detailing all the changes that have happened since January 13th, 2020. Note: Devs that don’t appear in the weekly log are not necessarily away or not doing work, but may be working on things currently not announced or backend work that doesn’t need to be detailed. Arcade @macdguy started worked on “Lonely Gun 30XX” gameplay, along with working on the arcade achievement list, leaderboa…


i assume it’ll be a higher priority after the arcade is complete, which is slated to be after the engine upgrade at that, so it might be a hot minute before we see its implementation.
Comunacho March 17, 2020, 9:27pm #7

If this is implemented, I wonder how pvp zones would work out. Perhaps it’d be cool that like, if you own a certain weapon, (For example the shotgun) you could add that weapon so that everyone could use it inside the PvP zone in your condo (So, in that PvP zone everyone has the shotgun, and you could limit it to the shotgun too). This would make milestone weapons (I suppose also regular milestones, as they could also have pvp advantages) so much more valuable and useful, as each weapon could provide you with a new tool for your condo pvp. It’d also be more fun than just having a small selection of “condo weapons” for pvp, and would incentivate people to get more milestones.
Condo pvp has such a huge potential imo, but there are so many small things that will need to be decided. 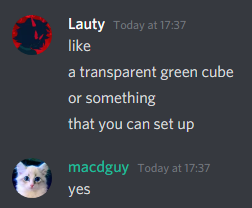 You can ignore the rest of this post as it’s just me rambling about a bad idea (but maybe better suggestions can come out of this):

maybe a weapon zone that determines what weapons you can use

Weapon zones would have the option to set a

Actually, now that I think about it, maybe it would be better to have an all-encompassing permission zone that updates your permissions

You would have the ability to change a player’s permissions to the configuration set inside a permission zone. This includes the AllowSpecialItems permission (although I don’t know if it is specific down to the weapon or a permission that covers everything).

When you have a PvP zone with weapon restrictions, you can do things like:

When you have a zone that changes a player’s item restrictions/permissions, you can do things like:

I don’t know if/how these volumes would work yet.
It would be cool if we had an all-encompassing volume we could place down and we could just check off what kind it would be (we could have it be a damage + permission-changing volume) but individual zones for each thing could work too.

I agree that condo PvP has a lot of potential. I heard that there were no plans for condo currencies being able to unlock stuff. I remember, however, that Caboose said that condo currency could be used with Condo I/O. 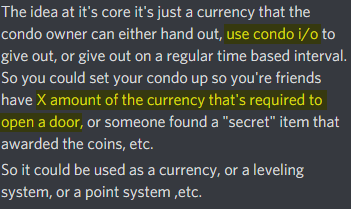 Maybe if condo i/o won’t allow players to buy permissions/stuff in your condo, then you could possibly make a

Honestly, I do not know how pvp zones will work out.
If I am being completely honest, at this point in time I think they will only be zones that players can take damage in.
I think it would be nice to have PvP zones you can restrict weapons in (like in your post) and possibly even zones that allow you to change a player’s permissions/weapon restrictions (which will open up so many more possibilities).

This idea would be perfect! It’s a bit like the Minecraft plugin WorldGuard Regions and Region Flags, in which you can create “regions” by selecting two corners and then adding flags, like enabling pvp, por making players invincible, or allowing players to break/move stuff (If something similar is added to TU it could be the basis for Community Condos).
I hope the devs see your idea and hopefully implement something like it!