This bug has been happening for me and friends since the Kart mode entered the game.

It is hugely gamebreaking and it’d be nice if this were fixed. We miss playing golf but it’s just not possible like this. I see in a previous fix it was mentioned but it absolutely is not fixed.

Can you give me more information about what you’re experiencing?

Are you late joining a game that’s been in progress for a while when this happens?

Does it get worse the longer you play or is it consistent from the start of the match until the end?

Every single object in maps that moves such as sliding blocks, spinning wheels etc, when hitting the ball we collide with them but they aren’t actually in the spot we see them in. The physical object is obviously desync’d with the host.

It happens from the very beginning, and when joining late. It happens permanently. I can’t tell if it gets worse or not because it’s just very very bad and we end up having to quit. We love the golf gamemode, more than stand alone similar games but this has been broken for some time so I really hope you can fix it.

Hmmm, was there a specific map you were playing on? What’s the ping, roughly, between you and the host?
Being able to reproduce your scenario will help me track down any remaining issues in the synchronization.

A few friends as well as myself have experienced this too. However the only maps I remember it happening on was Altitude (the worst offender), Kingdom and I believe it also happened on the Forest map. It has been a while since those games though. But during those games I was with the host from the very beginning along with the others. there were about 5-7 people in that game and we all had roughly the same ping, around 30-50ms I believe it was? It seemed that the further along we got the worse the desync got as the first two holes I could work out when to time it (even though it was desynced but just by a little) but after that it was impossible. There was one person that joined halfway through that left because they said they were experiencing it too, then another person joined in about 3/4 the way through the game and they also experienced it and left as well. Those were the only maps we played together that day so I dont know if others are affected as well. I can’t really get any more descriptive as that was the last time I played with friends and it was about two weeks ago.

All maps. Every single moving object has the same issue.

I very rarely have above a ping of 30, it’s not a network issue on my end that’s for sure. And previous patches I’ve been able to join with americans no issue (I’m in UK).

To be honest just join any mini golf game I imagine? You should be able to see it for yourself pretty quickly. As long as you are not the host. The host seems unaffected.

Have you been able to find the cause? If I can help in any way please let me know. We really want to get back to playing golf

joining any server should replicate it easily.

An update: we were able to reproduce it, so we’re currently trying to figure out why it’s happening. Hoping to solve it in time for the next update but it depends on how tricky it is.

Thanks! Just want to confirm that this one is gamebreaking.

Good to hear this is being looked at, seen this happen multiple times recently and it can be frustrating (though you can play around it)

Okay, just did some final tweaks and tests, and the fix should be ready to go for the next update. If you’re still running into this bug after the update, please file another bug report. Thanks for everyone’s help

Unfortunately it isn’t fixed on some holes. I forgot to write the others down but will update when I can.

For now it’s happening to us on hole 16 on “Alpine” the bars that move side to side.

Kingdom hole 8 - the red walls. Desync’d still. We’ve tested it with our group and it
happened every time.

This bug doesn’t seem fixed @Sketchman could it be looked into again? It does seem improved on some levels but not many.

We miss playing golf so much and it worked so well before, what happened to it?

I can look into it again, I actually used Kingdom as a test case (since those rotating walls are very obvious when they’re not in sync) and was able to use a simulated ping far greater than what would normally be playable without noticing major desync. Because of that I’m not sure if I’m going to be able to reproduce it unfortunately, but as I said I’ll take a look.

Is there any other information that you can give me? Is your ping relatively stable? This one would be silly if it was the cause but do you have an FPS count much higher/lower than 60 and is it stable?

Thanks sketchman. I really hope this can be fixed, desperate to play golf properly again

Can I volunteer to help test or anything?

As for FPS - I play capped at 60, partner uncapped 100+. We’ve had plenty of games with awful laggy hosts and still (prior to this issue) never had desync. We played Kingdom last night with 2 different hosts, one quite high ping one very low and we had desync throughout both. We’re going to try some things tonight see if we can find anything specific to help. Did something change in a major update that’s put it in this position?

We’ve tested it with horrid ping, out of order packets, packet loss, etc. I tried messing with the FPS, and while there is some jitter from lost packets, what I’m seeing largely lines up with the physics simulation on the Host’s end. Could you maybe send a video just so I know what you’re seeing?

Strange night but we played for two hours and couldn’t seem to replicate it very much which is unusual for us. I’ll take more videos next time if I can catch it again.

Here’s 4 videos. We played with capped fps @ 24 and 60 as one of us hosting and one playing and in random games. Didn’t seem to change much. I joined a game with a high ping (average 58 but 200+ at random moments) and didn’t get any desync. I joined a game with a very low ping and really clear obvious desync. I also tested late joining which previously always guaranteed we had desync, this only worked in 2 games tonight out of many.

Our only assumption here is that it comes down partially to the host computer being poor. We could setup a virtual machine and limit it and see what that does. Even so, there’s another factor here and maybe you would have more insight than us for that, but even with very laggy hosts (network lag? not pc lag) there isn’t always desync.

The only thing confusing me is why is this an issue now, but never previously? I’ve owned Tower since release and this has only began a couple of patches ago (specifically Accelerate I think). Something has definitely improved since last update though.

Golf: Desync happened a LOT to me too today and I also got weird “Hurry Up” times in the thousands of seconds. One time it was ~1700 seconds (screenshot) and another time when I joined another server it suddenly was 5000+ seconds.
But yes, the desynced objects were the reason I had to (((ragequit :P))) a lot of games today. One time I even got wildly teleported back and forth every frame between the ball I “kicked” away and the spawn location until a few seconds later I got booted back to the spawn. I hope that something like this won’t accidentally trigger a cheat detection, if there even is any 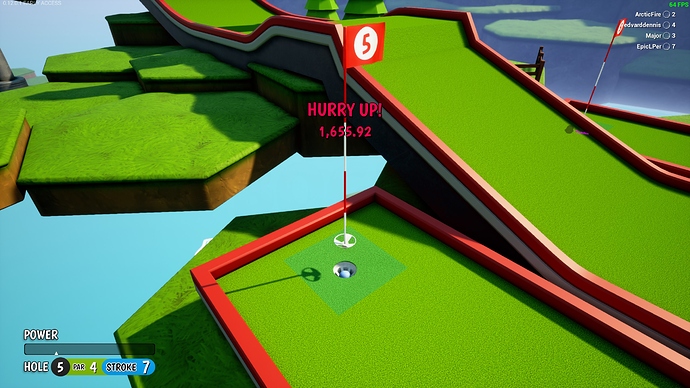 Here’s a second screenshot about something weird that happened today… Look at the top right corner. The results are printed twice there. 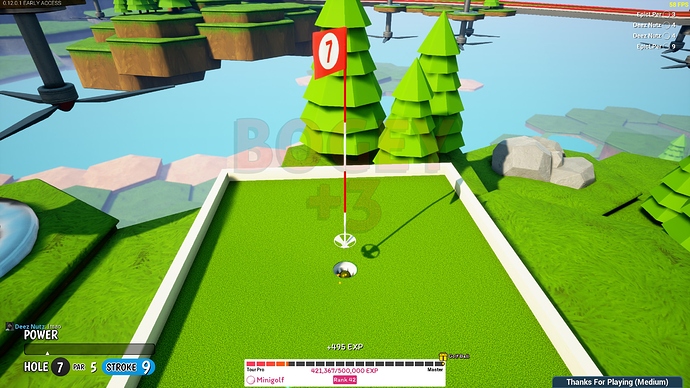 Any update on this? I’m still getting it sadly.