Will Female character's "Melons" be resizable

only in shape, because otherwise its copyrighted

I’m amazed that it’s because of most of the people on this forum that this game is being made.

It’s a good question. You shouldn’t think anything wrong of body shape customization. His delivery may be questionable but not what he’s asking.

I’m the kind of guy that spends an hour in character customization for both males and females, so to those of us, it matters. If everyone goes around with the same generic, dull body shape similar to what’s currently available, it’s not going to bode well for the game.

it was meant to sound questionable, my bad attempt at a joke

I honestly don’t care much… It would be cool to customize your character though.

Yes they probably will be resizable.

As a female myself, I find that instances where you can’t change breast size either leaves you with unrealistically large, or too flat chested. I’d personally love to be able to set it to a size I won’t need to be self-concious about.

as much character customizables as possible is good because the more things you can customize, the more
unique everyone looks.

Changeable breast size is, in my eyes, kind of a necessity for female customization, as most games that feature character creation have it as an option by this point. I’ll be surprised if it isn’t in the game.

What I wanna see is some kind of crotch bulge slider, like Saints Row. I understand if that’s considered a bit too much though

Saints Row did that for comedy.
Tower Unite isn’t very comedic in its nature, so it would probably come off as super inappropriate.

Besides, if a guy wears pants, the bulge doesn’t show. That’s more of a swimsuit/underwear kind of thing, and I doubt the game will have that, either.

So my dream of running around in a speedo won’t be feasible?

There is no female or male character. There are different body types. Pronouns are not used in Tower Unite.

That aside, yeah we’ll probably allow for body adjustments and shape tweaking, but nothing major for Early Access. It’s going to be evolving thing and slowly more and more features will be added.

The new character rigs we have been working on have way more controls and dials to play around with, but it’ll be awhile before we have an editor for everyone to mess with. The simple fact is, at this stage: gameplay > character customization.

As a breasts enthusiast I fully support this.

Whilst we’re on the topic of “nice features” 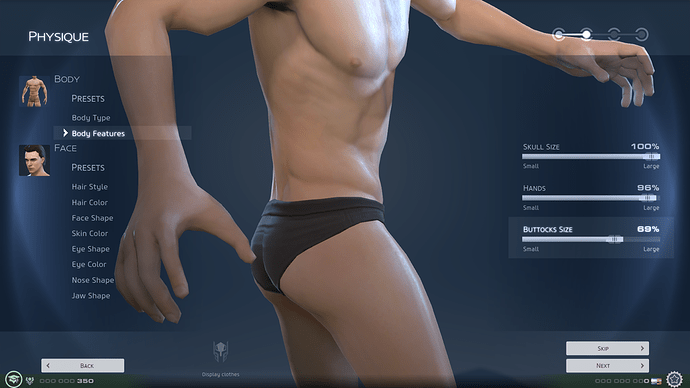 Took this picture a while back, you might know the game.
Butt I feel like this is a feature we also need.

I’m all for equality, I agree with this completely :^)

I /love/ Skyforge. We should play it!