Tower of the NecroDancer 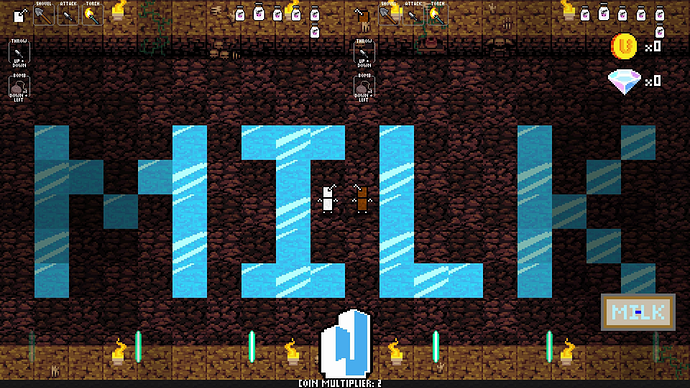 Hello, and welcome to what may be the dumbest thing I’ve ever made. This is a mod for Crypt of the NecroDancer featuring your favorite TU playermodel: Milk. I’ve been working on this off and on for a couple months now, and I’m really excited to finally release it. Here’s the trailer I made for it!

I don’t proclaim to be any good at pixel art, and I don’t consider any of this to be professional level stuff. Despite all that, I’m proud of what I did. If you’ve got Crypt of the NecroDancer, maybe you’ll enjoy taking this dumb mod for a spin. There’s two versions: one for the full TU experience with 101 modded sprites, and one for the Milk-based stuff alone with only 71 modded sprites. There’s changes both incredibly obvious and somewhat small, so keep an eye out and you may find a surprising detail. You can find both mods here:

As a note, most of these sprites weren’t made from scratch. Plenty were heavily based off TU images to the point of practically being low-quality traces, and many of the character sprites feature details lifted straight off their non-modded counterpart. Heck, the LC dragon shopkeeper is literally just a slightly shortened copy of the one from Grand Quest in the Casino!

You’ll also find that I created some badly written fanfiction lore to explain why Milk ended up in the Crypt 14 times, each with oddly specific restrictions. You can read that below, if you don’t value your eyes.

With that, I’ve said all I want to about this dumb mod. Enjoy!

“Hey, it’s ya boy Rob! Listen, I gotta let you in on somethin’. You know that crypt ya went explorin’ the other day?”

Did Milk just nod at a phone?

I don’t know that Milk has any sound producing orifices, so yes.

I guess the milk carton could control the amount and force of air going down the straw - allowing it to ‘bubble in the affirmative’.