What's your most played game on Steam (in hours)

i have a problem

If you think you have a problem you should see how many hours I’ve got in most of my games https://steamcommunity.com/id/originope/games/?tab=all

Terraria, with 919 hours and counting.

This game can be kinda dangerous to your schedule, especially if you start installing mods…

In second place comes Binding of Isaac: Rebirth, with 816 hours on record.

I have a problem

yeah, i’ll get there someday. 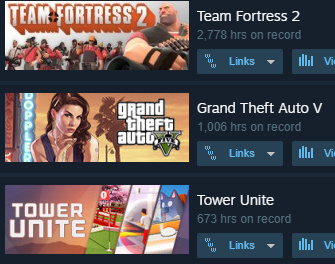 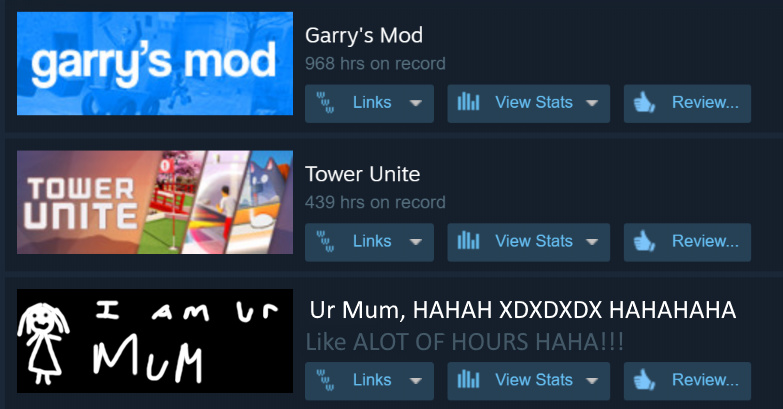 Tower unite and the rest of my top 3 is software

Tower unite : 300 something hours or as i like to call my entire vacation period

Gmod (Only because of GMod Tower, i never really played anything else on GMod)
Then Tower Unite and Wallpaper Engine. Unite is about to overtake my GMod hours, which is good.

Garry’s Mod 4,300 Hours, because of GMT.
I’ll beat this time with Tower Unite.

Same as above me except with 1600 hours on gmod

The last time I checked these stats was over three years ago. I thought it might be fun to compare them, so here’s what I said in an old, similar thread:

What is your top 5 game play hours on Steam?

Let me just point out, though, that if I took my playtime in all TM2 games plus TMU and put it together (excluding my time in TMN and when I just used ManiaPlanetLauncher.exe), that totals to 295 hours of TrackMania. Yes, I am addicted to those games.

Now then, for the current top 5.

5: In fifth place lies TrackMania 2: Stadium with 246 hours! As someone who’s still active in the TM2 community, it’s no surprise that the most popular of the four TM2 titles lands in my top 5.

4: In fourth comes Tower Unite! I’ve got 273 hours clocked on it. Whether that’s a lot or a pitiful amount is up to you.

3: Our bronze trophy goes to Garry’s Mod with 280 hours, just barely edging out TU. I had over 100 hours on GMT, but just messing around with the rest of what Gmod has to offer played no small part in the total either.

2: TrackMania 2: Valley gets the silver trophy with 320 hours on record! This one is my favorite environment in the entire series since it’s got an incredibly fun to drive vehicle and the best looking vanilla scenery you’ve seen. If only one TM2 title was allowed on this list, then PlanetSide 2 and its 129 hour record would have taken fifth; other TM titles still ahead of it include TrackMania United as well as TM2 Lagoon, Canyon, and Stadium!

1: Finally, in our top spot lies Team Fortress 2. 347 hours are logged from me; that’s no surprise, it ran well on bad hardware and you can’t argue with the price of free (especially for a game like that). I still hop on it once in a blue moon.

Now for some fun facts!