image.png792×223 8.87 KB
That’s right, we’re back with the talk show spooktacular that only comes around once a year, The Bone Zone!

For those of you not in the know - The Bone Zone is a 5 year spanning talk show me and a few friends have been doing since Gmod Tower that ONLY occours during October (with the exception of a few special events.) There are several episodes that will be done throughout the month, so if you can’t make it to one, fear not there will be more!

Schedule -
Normally The Bone Zone starts sometime after the first quarter of October but we’ve decided that’s just too late! This year we’re going to get a jump start so we can mill out episodes as we see fit with no feeling of rush or not having done enough.
The crew and I have discussed it and we’re going to try to do our first episode on - Friday October 4th
Of course I’ll come back to confirm when the date is set and stone, as well as the time.

Rules - It’s pretty simple, we’re happy to have audience participation. You’re not expected to be a silent stone statue, you can chime in from time to time but try to read the room and if you’re asked to chill please do so. To get kicked out, you have to put in some serious effort and will be warned several times. I take no joy in having to kick people out, I don’t want anyone leaving feeling unsatisfied.
Of course there are always a few bad apples, but know that if you’ve come to be disruptive and obnoxious you’ll only serve as a quickly forgotten distraction after you’re kicked. Better to enjoy the fun while it lasts rather than be another forgotten faceless hindrance.

Our Streamer - As it stands we have @Alexer_Zoderia (also the host of Tower Unite’s #2 talk show - The Prism Podcast) on standby as our Streamer for anyone who wants to watch but can’t make it to a show due to my computer not being able to handle numbers much over 32.

Screen-caps - Highly encouraged, feel free to post them all over this thread along with your experiences, we love to hear from you. It’s not uncommon that screen caps are saved and put in a collage to remember the best of The Bone Zone.

Recording - Also very encouraged that anyone who wishes can record and it’s SUPER encouraged to edit the footage in your own way, upload it to Youtube and share it on this thread.

Closing Statements - Questions, comments, and enthusiasm all welcomed in this thread. Lets make season 4 one to remember. Stay spooky!

This is my time baby

Can’t wait!! Let’s all have a good time and make it a wonderful experience for everyone to enjoy ^-^

thats cool, i made the fan art of the stranger things s4 style logo for it: 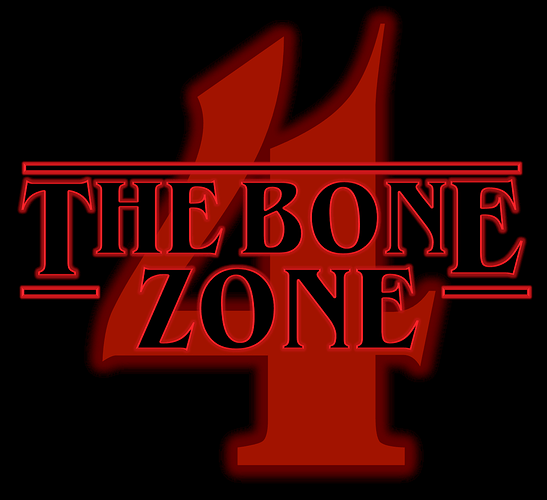 also, for those who didn’t watch the previous episodes before, i have almost all videos of tbz on my thread: All Episodes of The Bone Zone Season 1-3 + Bonemas Special (so far) [UPDATE 4/6/2019]

It’s time to get Spoopy, lads

Let’s make the 5th year another great one

So excited! I live for events where our community can come together, so I’m really pumped for this. Hope I can make it on Friday.

We’re excited to have you! Also friendly reminder, that all episodes are usually very different, so feel free to come to multiple.

Its time to get SPOOPY

What time on Friday?

Cheers Lich, let’s hope this year is a good one!

Also, there will be some shows for those who have different time zones!

@Jackpot
Not really sure yet truth be told, my co-host has got some stuff going on the day before and he breifly said “I’ll be free like, Friday, Saturday, Sunday.” So I randomly chose Friday, and we’re still discussing/figuring out when it’ll be.

@Agent2583 Of course, we’re going to try and squeeze in different hours for different people and of course if not more we’ll be sure to squeeze in at least one daytime show.

Hopefully I can make it this year

Once again gonna try to be there as much as possible

As it stands our first show is going to be running at Friday October 4th at 8:00pm EST
Can’t make it? No problem! Keep in mind that The Bone Zone is not a one time event, it’s several shows throughout October!
If there are any changes, you guys will be the first to know!