After some internal discussions, it has been decided that Kingdom, one of the minigolf maps, will get a quality of life update. We made this decision after reviewing the status of the map currently. That is, the map is not very popular because it is considered to be punishing and frustratingly difficult.

I look forward to getting your feedback!

i fucking love kingdom
people are just bad at it, unlike me, i love the way it is, it has made me able to understand how hard too hit the ball and such

The only thing I don’t like is that this part of hole 11 is really bumpy, everything else is great: 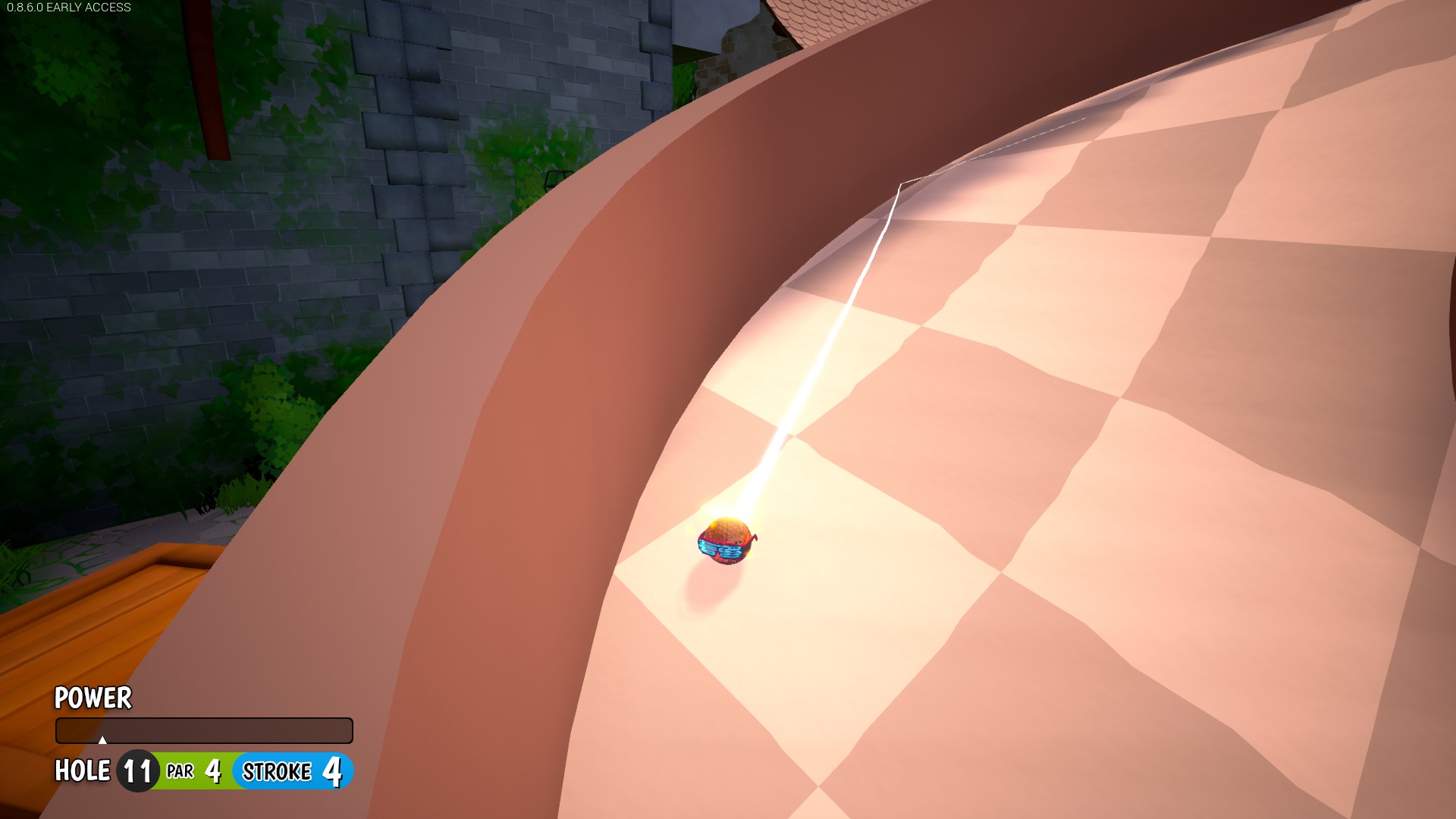 Thank you rmmm. Yes, that can be fixed! I’ll add it to the list. It’s an issue with the geometry.

The moving walls on some holes desync for players that aren’t the host, not sure if this is fixable though. It makes me never join kingdom games unless I host them because the Hole in Ones give a huge advantage on this map

I feel the same as Umbra, the desync can get very bad when i’m not on my own or hosting, so maybe less moving parts to the holes? It’d reduce the amount of stuff to desync on, though that’s only removing the symptoms.

Kingdom’s probably my favourite map, and I especially love the design buuuuuuuuuttttt

I always have troubles with this:

Hmm, the first video shows that hole 8 could use some higher walls there…

I’ve railed on it more than I should have, and upon replaying it a bit and paying attention I don’t have a problem with many of the holes, there are just a few nitpicks.

From a visual standpoint:

And for a core issue running through most of the map:

There are a number of holes that have more fundamental design issues (In my opinion).

To preface, I think ideally there should be a balance of a hole being challenging, but also intuitive, and my complaints with the following holes are mainly when that balance feels a little out of whack. You shouldn’t be able to go max power as you please and always win, but to some extent you should be able to understand how you’re supposed to be putting.

A lot of this may be subjective, but after playing through it a bunch that’s my take away.

(I haven’t experienced the “desync” issue myself, but that’s not how Minigolf usually handles ping, usually it just delays your shot, obstacles going out of sync seems like a weird bug independent of the map itself)

Played through the entirety of kingdom trying to get the “bad” routes. Here’s some things I noticed: 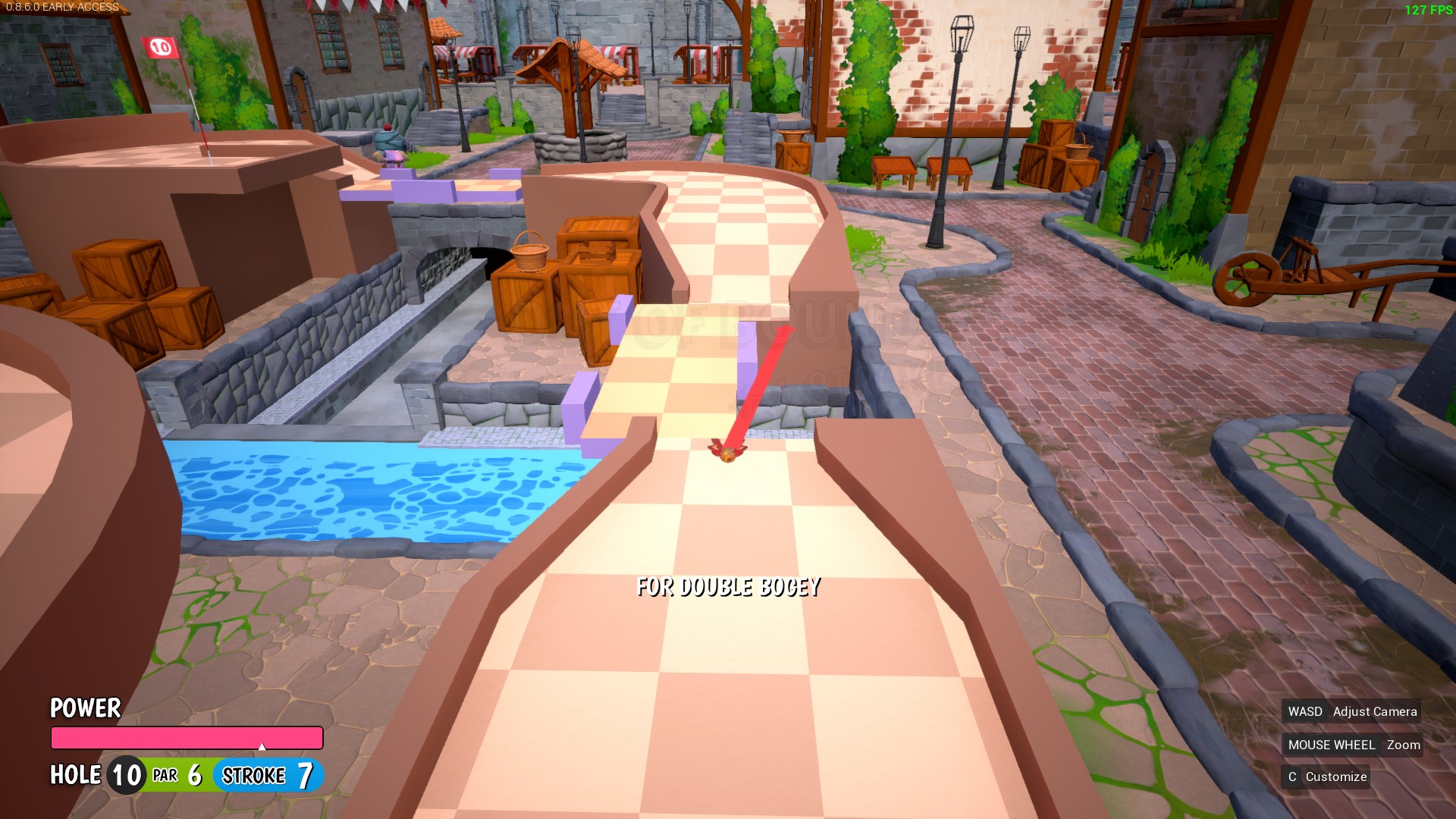 The ramp on this area is a bit hard to see, and when you try to hit the ball at a stronger power (to ride along the curve and get close to the second platform), you end up flying off unexpectedly. I would say to make it more of a square L shape rather than a curve to hint that a lower power level should be used. 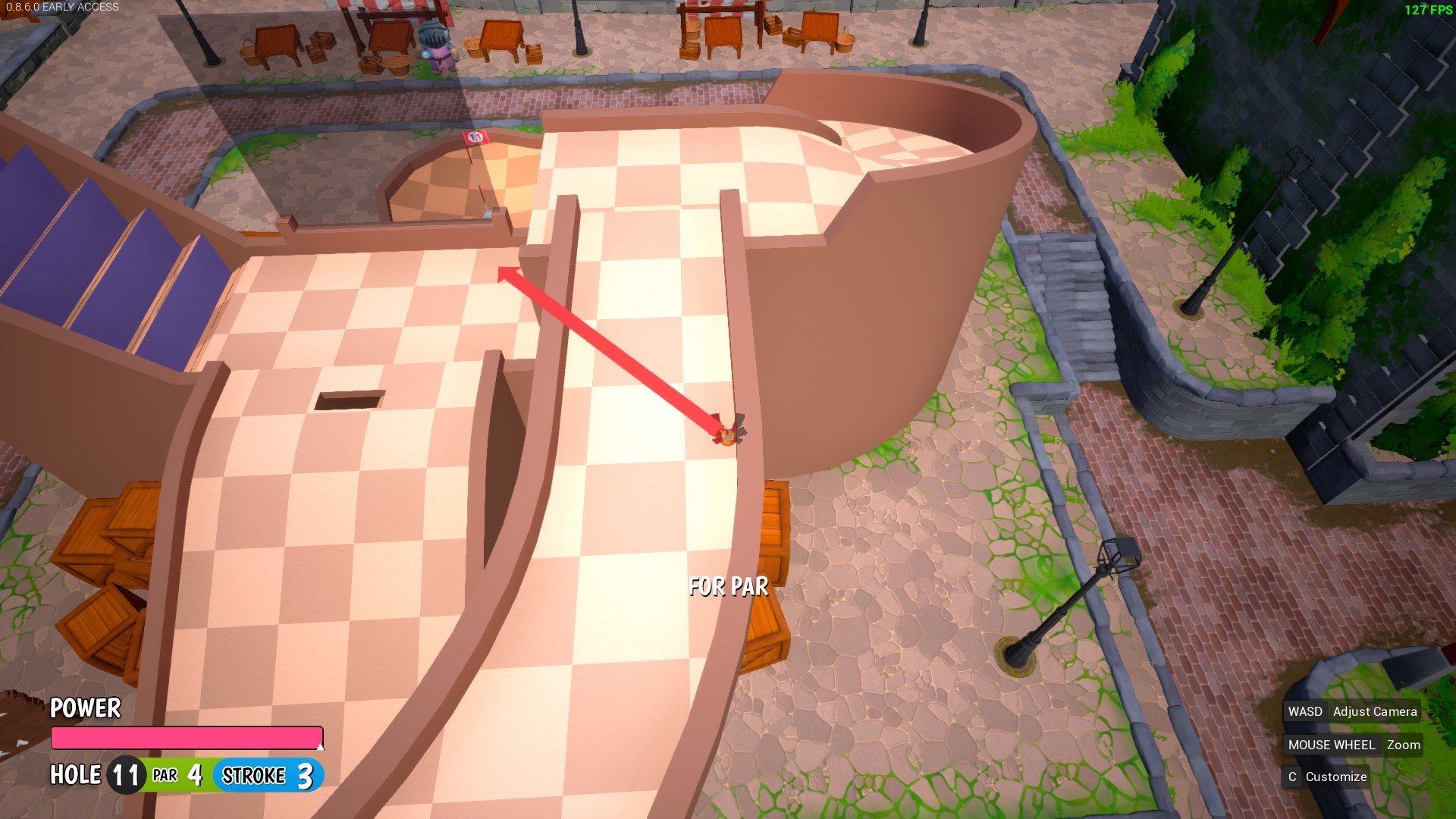 Hitting Par (without getting HiO) is quite difficult. Did the “bad route” perfectly as intended (shot 1 to before stairs, shot 2 to top of stairs), and hit shot 3 full power, ending up in this location. You’re guaranteed to end up on the right side because you ride the curve.
Going the safe way requires two shots (one to drop down onto the lower platform, and another to go down the ramp), resulting in a bogey.
Ricocheting off the left wall can get you a par, but requires some precise angling and power to properly end up on the ramp (hitting too hard makes you miss the drop-down.

I’d say add a booster after the moving platform that guarantees a drop-down, but add another obstacle that would prevent players from dropping down, and make the entire ramp slope downwards (no flat part). This would give a birdie for players with good timing, and a par for players who did things correctly but just got unlucky. 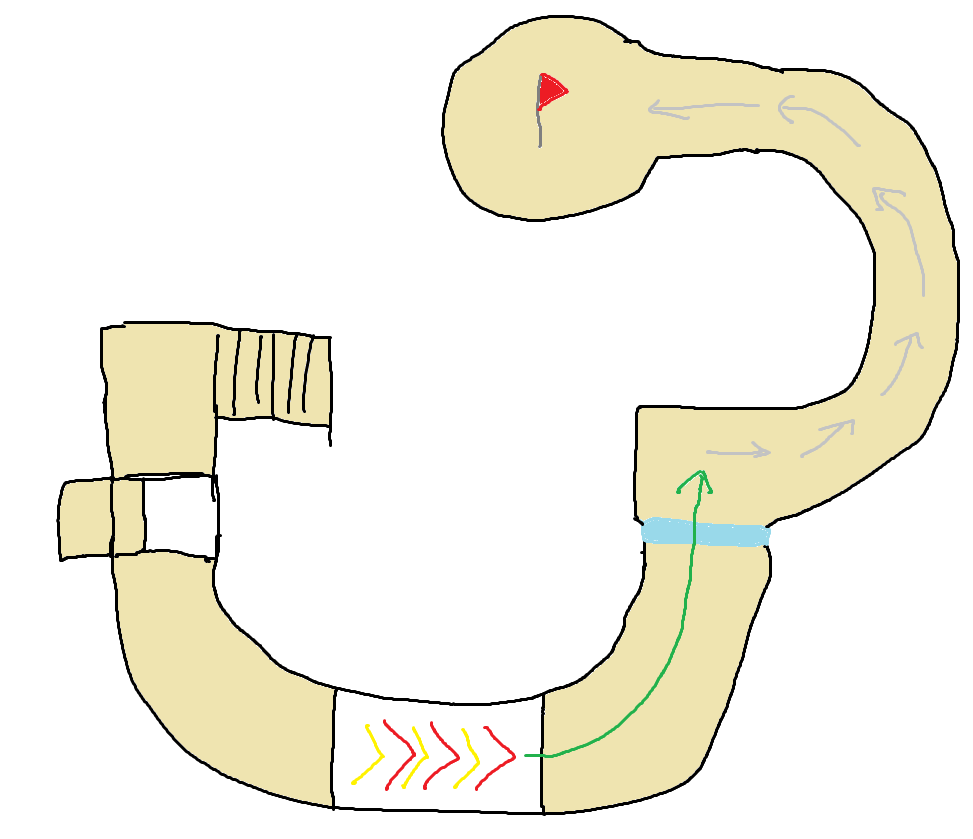 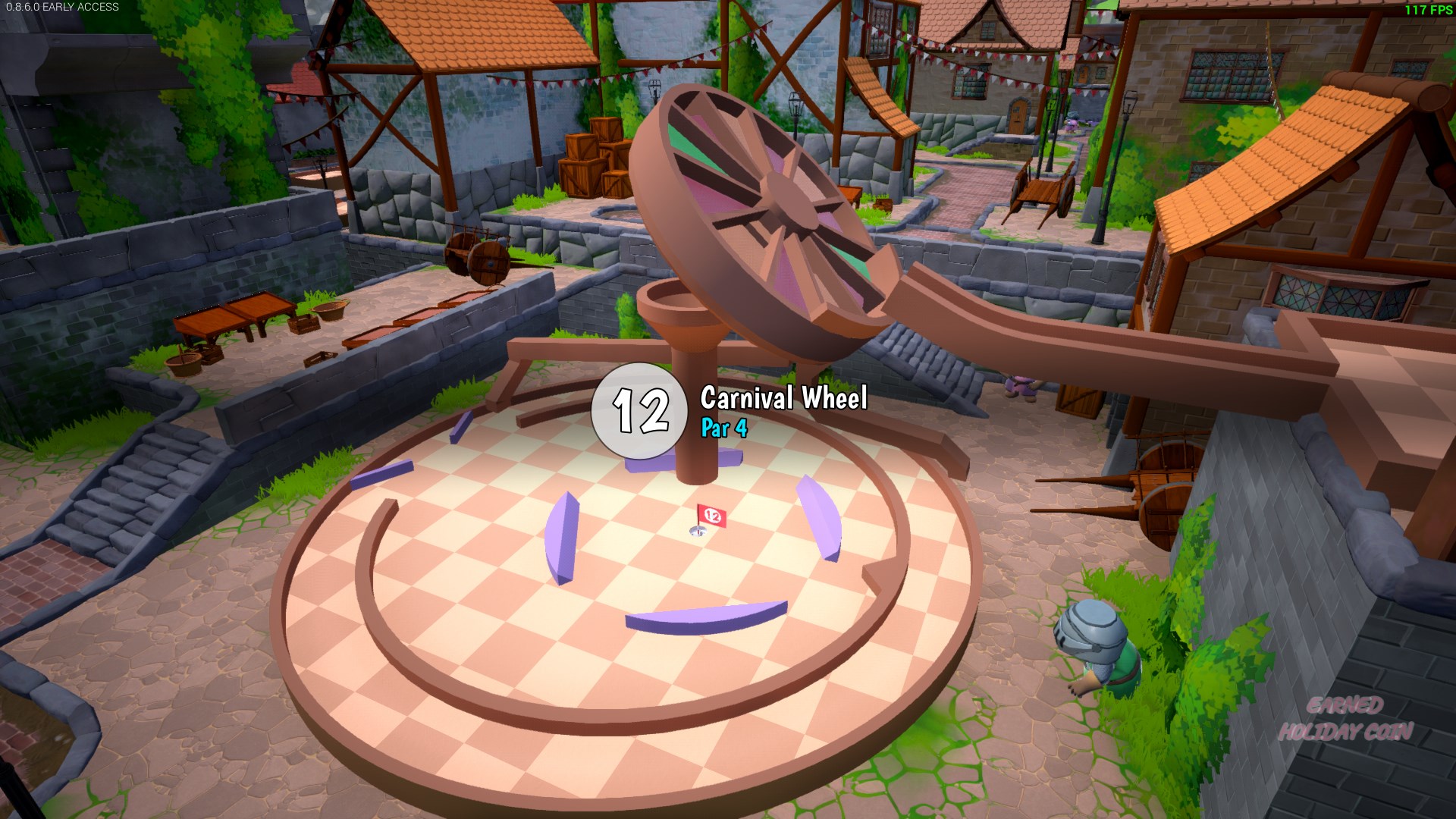 Not really an issue with the map design itself, just that the wheel breaks pretty often. I’ve had several times where I score in the green area but end up clipping into the red, or just phasing through the wheel entirely (not a lag issue, as these games were self-hosted). 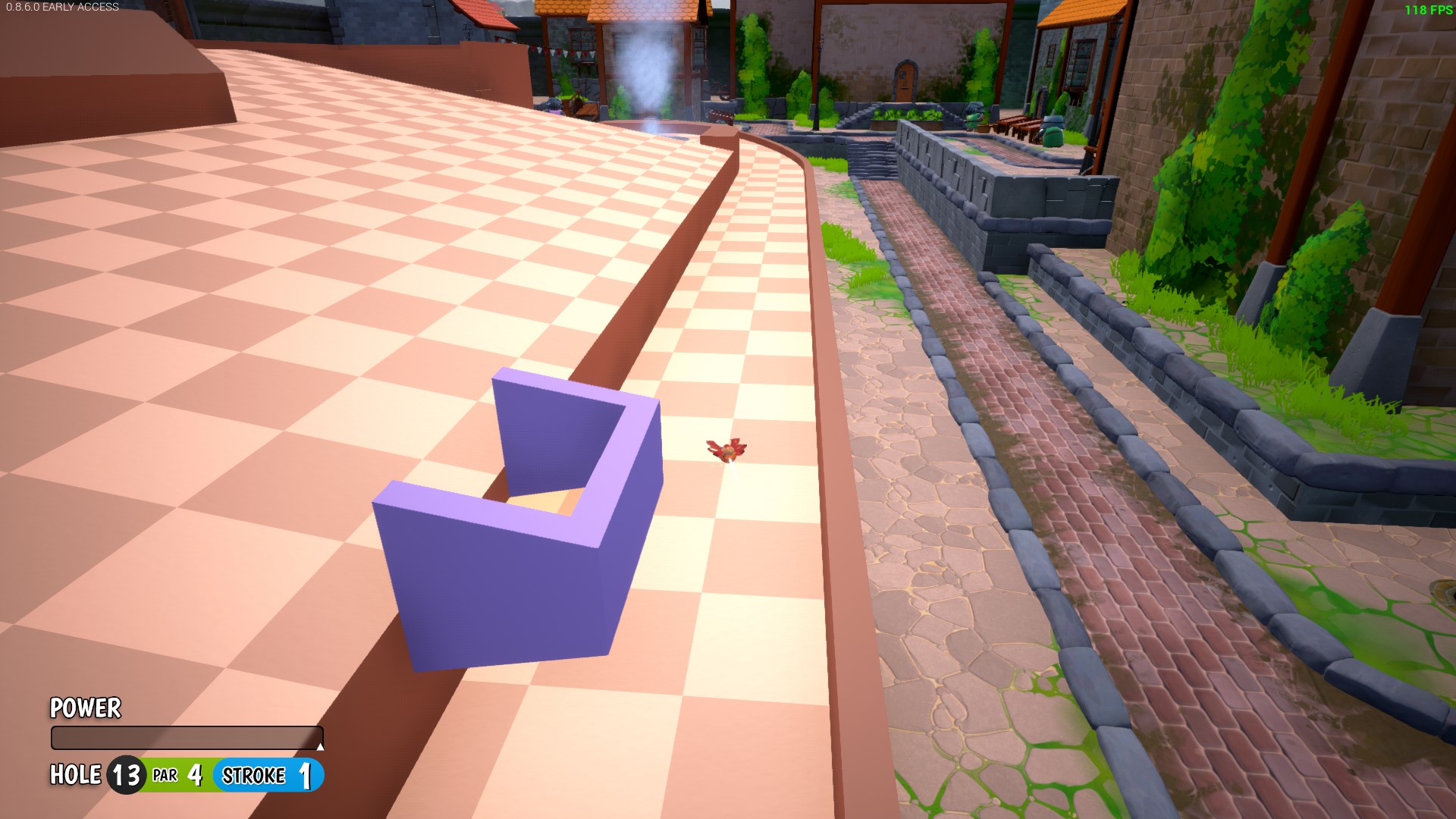 Having your ball end up on the other side of the platform from the waterspout makes it impossible to see the position of the moving wall (and therefore score a par). 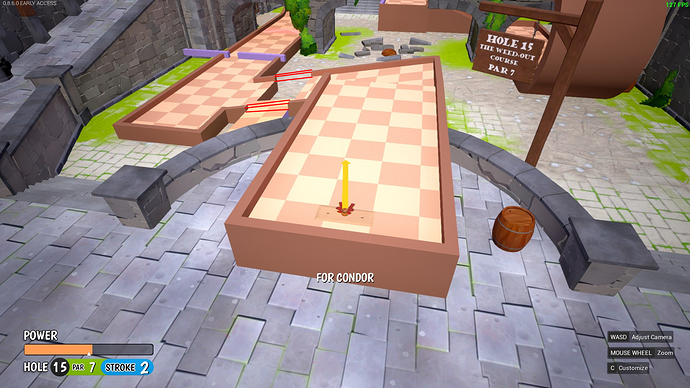 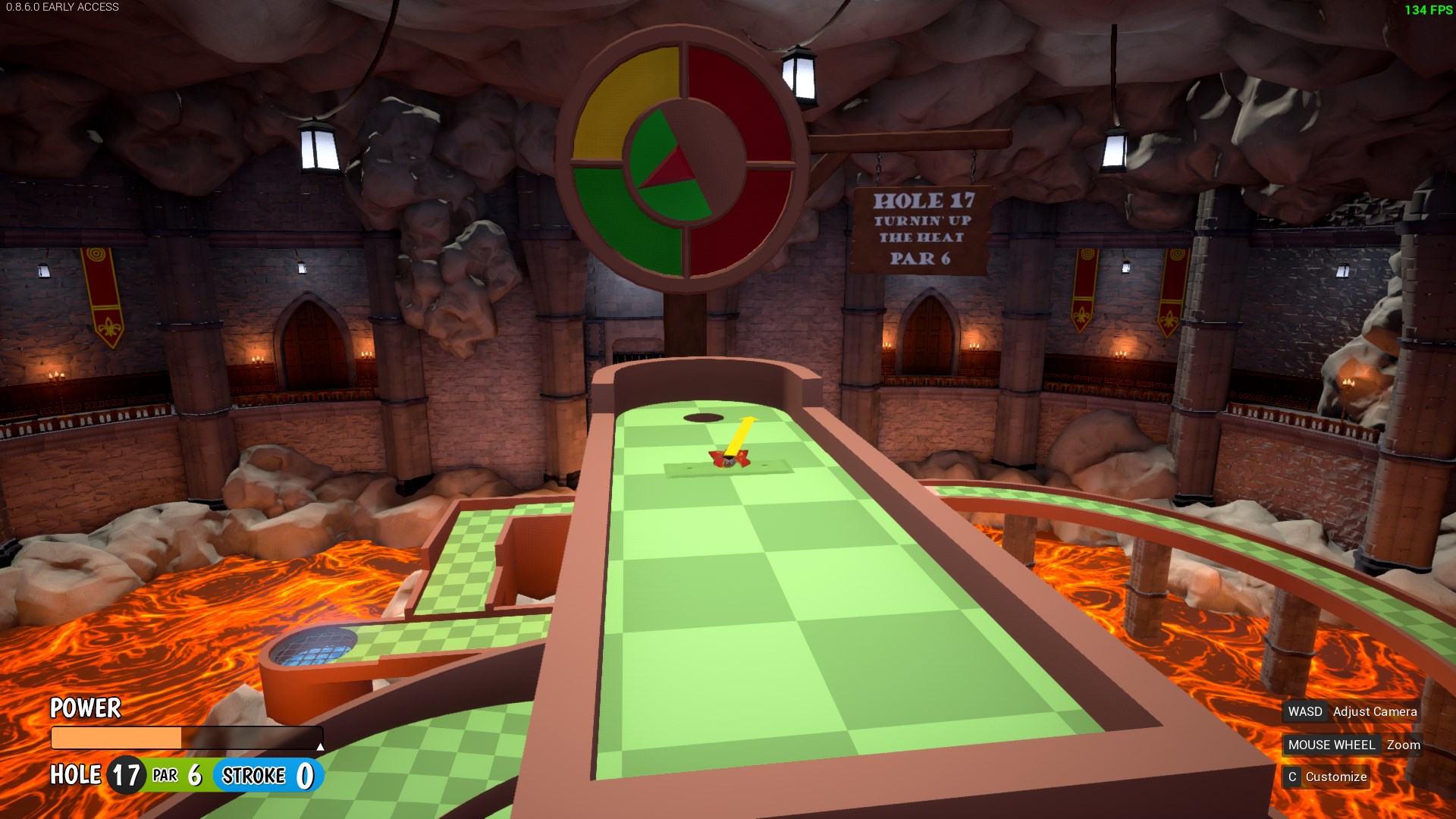 The indicator could use some adjustments. You would assume that you’d want to hit the ball in while the arrow’s in the green area, but if the ball gets into the hole during this time, you actually end up in the yellow area (or sometimes into the red) since it doesn’t account for travel time down the pipe. To actually score a HiO, you need to hit the ball while the arrow’s in the top right red region.

Agree with all of that, noticed stuff like that myself but couldn’t quite put it into words. Thanks for putting in the effort!

Kingdom definitely needs a rework. I mentioned this in one of my posts when Kingdom was first released.

Kingdom: Improve on design and other items Suggestions