In plaza games like Trivia, people will use massive player models specifically in order to block the view of the screen from the other players. It’s an annoying troll.

I’m assuming that massive character models would also be a problem in other plaza and casino games as well.

I would suggest that either player models be disabled for games like Trivia, and probably as well for all of the mini games. Probably even better, model sizes should have a lower allowed maximum limit (assuming that is an option that can be implemented).

I know that disabling player models is an option, but that’s not really a solution to the problem. People who are just trying to enjoy the game shouldn’t be the ones who have to change the way they play because of trolls.

Here are a couple screenshots illustrating my point. 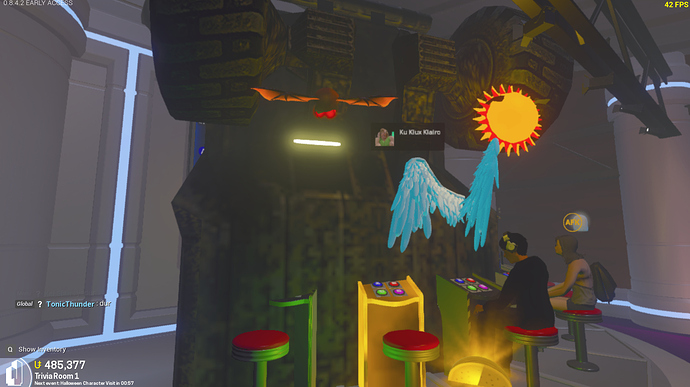 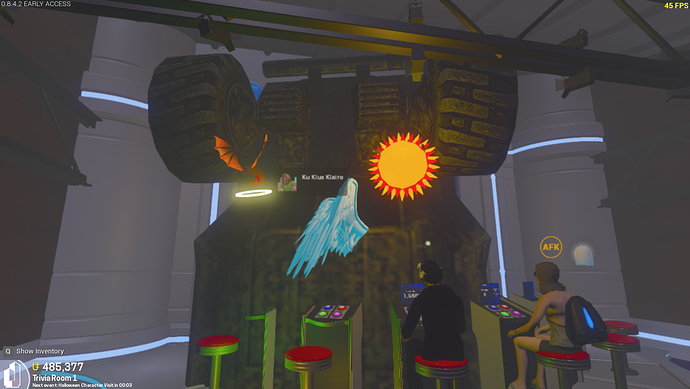 Have you tried blocking the models?

I know that disabling player models is an option, but that’s not really a solution to the problem. People who are just trying to enjoy the game shouldn’t be the ones who have to change the way they play because of trolls.

Though I do think that’s a decent solution, they addressed it in their post.

Oh woops, I didn’t see that.

That model in your screenshots pretty fun one in things like ball race, a lot of larger models can be funny so it sucks to have to block them entirely… but yeah it’s super easy to troll others with. tbh i wish there’d be an “auto-block model/auto-mute weapons” on blocked players. or they turn into a wisp for you like other server people do. i’m super grumpy so i hate it when people stand on me and start shooting rockets or changing into large models to get my attention and blocking does nothing to fix them.

Here is what other people have said to me when I complain about having models blocked or not shown up.

“Yeah you should just block it when you see it, people should be free to make what they want without being restricted by others opinions”

But yeah I think some more advance blocking and rules should be put in place since it just makes workshop a hell hole.

Why not give a fullscreen option as well?

My first thought when looking at that screenshot was: “Why isn’t there just an area in front of the screen that automatically turns all geometry touching it transparent?” Maybe even in a transition, making it more invisible the closer to the text it is. Like: Slight invisibility when it just touches the screen border, proper ghost if right in front of the answers.

I mean, yeah, but then isn’t the person who has to block models being restricted in a way too? Like, people who use these models do so specifically to troll. As I said in my op, people who aren’t trolling shouldn’t have to change the way they play for people who are being jerks because it’s funny or whatever.

I love seeing all the different player models. I hate when those models make it impossible to play games.

Small player models can be annoying too. When i play virus i almost always encounter small player models. Every time i complain people just say that “they still have the same hitboxes”. That doesn’t change the fact that they are harder to see.

(also i’ve had problems with blocking player models in gameworlds)

Imo In virus something akin to the laser tag models should be used. The customisation would come from upgrade and hats.

The customisation would come from upgrade and hats.

“Why isn’t there just an area in front of the screen that automatically turns all geometry touching it transparent?”

Because you then need create completely new shader material for models, or make screen overlaying player model textures, but not world meshes (Thus hiding it 100%), but that AFAIK cause some graphical glitches with particles and being nearby it with accessories.

It does get ridiculous sometimes but I wouldn’t not want to see them in the plaza either. Could there be a size check when entering a building / changing avatars?