I don’t know if what is causing it, so I thought I’d make this post to see if it was on my end or not. I connect to a server in my region with around 20 people and the train station is extremely laggy and I guess the plaza in general. as well some areas give me random FPS spikes, I go from 60 constant to like 30-45. even when I went into the arcade, it had maybe 4 people in it, it wouldn’t stop jumping between 60 and 40 FPS and it stayed closer to 40 more consistently. I’ve Been playing Tower since GMod tower and I know ive struggled here and there in the past to get good FPS, but right now I’m running the best rig I have ever had and seem to run just as laggy as ever.

I’d like to piggyback on this post, since I have been experiencing the exact same issue for a while now, and our issues with fps could possibly be linked. I have the same cpu and a pretty high grade gpu as well that should yield better performance. I can only imagine how many players possibly feel sluggish in game, especially with a higher refresh rate monitor where fps spikes and low fps feel worse than a 60hz monitor. This explains it well: https://www.reddit.com/r/Monitors/comments/8grxzq/60fps_looks_bad_on_144hz/dye96ri?utm_source=share&utm_medium=web2x&context=3

System Specs:
i7-7700k overclocked to 4.4GHz
1080ti overclocked a bit
32 GB of ddr4 2400hz
Tower unite installed on m.2 NVMe samsung 960 pro
Power plan for the pc is the hidden “Ultimate performance” that un-limits the cpu max usage as well" that can be enabled through command prompt in windows, so nothing too custom there.

I’m not quite sure if it’s asset resource consumption not being utilised correctly by the game, or if there’s a setting that’s missing? My pc runs better on other games, including those in unreal engine 4 as well.
I assumed it might not be utilising the pc components well enough, due to seeing the usage for both the GPU (Afterburner showing on the left) and CPU (Task manager performance section on the right). 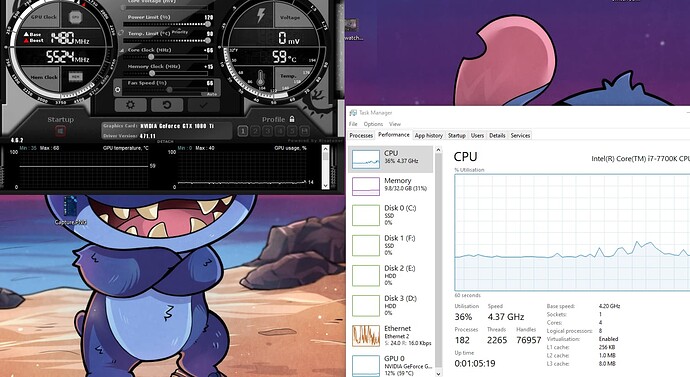 In the image it also shows memory usage being relatively low as well.
The GPU being under utilised can also be seen through the texture VRAM Usage (not sure if this is an important metric, but it seemed worth including too).

This performance was tested on the stairs of salmon says in the arcade, facing towards the super hoopers.

I am aware raw input and heapsize have no effect due to the engine, but I gave it a go anyway to try and reduce input lag xD
I also removed -heapsize, -noipx and -NOTEXTURESTREAMING. It helped my fps by 20-30, which is nice! But at the same time, the usage of both CPU and GPU seem to be exactly the same, and texture VRAM usage too.
Edit: the fps dropped again, no longer improved fps from removing this launch option xD
Side note: clearing model cache didn’t help if anyone was going to ask that.

Hopefully this thread gets more attention, since it sometimes feels hindering to the gameplay and charm of the game.

Just wanted to bump since idk if this thread has been seen or not, I’m not sure if every thread gets seen or only those with more traction xD (13 days since original post)

Is your VRAM usage accurate? because mine on my older laptop with 2 gb reads maxed when I’m on high settings, but on my 3080 with 10gb it reads less than 2 gb on maxed out settings.

I run Tower on my work computer which is an i9, 1080 ti with 64GB of RAM. My RAM is large because I need it to run the unreal editor without worry (editor content is not compressed like it is when we ship it).

Tower itself rarely gets above 8GB of RAM, unless there’s a lot of active workshop models, but it dips down as players change out.

My settings are all on Ultra, with AO and when I feel like having a better image I use 150% resolution scale. I’ve run it in 4K as well without issue.

My worst case other metric for testing is a handheld, GPD Win 2. It runs Tower at like 40-50 FPS on all low.

I would highly suggest updating your graphics drivers, remove ALL command line startup options (many posted do not help with performance or even apply to our game), and look into your overclock settings (do you have enough PSU power?). Overclocking could be what is causing your issues.

Not sure about him but my drivers are updated, I don’t use command line options, and I don’t overclock. My specs are slightly better than yours and yet, like I said, I average 70-80 fps in plaza at 1080p ultrawide. my performance used to be fine, but after an update maybe around a year ago, my performance suddenly tanked.

First, thanks for the response Mac

I took your advice for the launch options by removing them, and it didn’t make too big of a difference, but it may have helped slightly, so I’m keeping them removed from here on out

I ruled out the graphics card drivers being needed to be updated, and even after updating them, my fps didn’t have a noticeable change unfortunately.

In response to the last part of your reply, I’m sure overclocking is not the issue for the low fps and fps drops. My card isn’t majorly overclocked, and neither is my cpu, with my cpu being water cooled, and my GPU fan curve kicking in hard and a rate that prevents any high temps for any thermal throttling. I play other competitive fps games as well, where they’ve been CPU intensive like Tower Unite, with csgo hitting high framerates, and Overwatch also being able to hit 400 fps in training range, and always over 144 fps even in effect heavy team fights (pretty much the pc doesn’t have any overall problems with overclocking interfering with gameplay). In those games I always hit high CPU utilisation, being in the 90%s, and GPU utilisation always being high as well xD

As for what you said in your reply about your pc, your fps is higher, however, from a purely hardware side, I’m guessing your i9 has more cores since you probably need them for game development, compared to my quad core. This’ll probably mean more cores for Tower Unite to utilise and hence, will yield more performance.

I think there’s something a little more to this low fps than hardware itself though, especially given my low usage that I listed before.
I also decided to find out my fps in the game worlds as a comparison point so you’re aware:

I tested the mini-golf map sweet tooth (wanted to test a visually dense map), and got 280 fps on the cinematic panning camera of the first hole, and got 250 average fps for the entire first hole. If I spin the camera at high sensitivity, the fps bottoms out between 210 and 220 fps.
As for another gamemode, accelerate on bedzoom which was made later than mini-golf, and has abilities with particles and such, ran between 150 and 200 fps in single player mode, only once dipping to 140 fps for a second. At some point though, on the final stretch towards the finish line, bottomed out at 120 though.
This was with a custom workshop model, but as you and I listed in our earlier posts fps wise, it doesn’t make much of a difference, which you stated was because ram doesn’t use much over 8 GBs.

Interestingly, I looked at how the utilisation went whilst playing accelerate, which probably applies for other game worlds like mini-golf, and my GPU usage went between 39 and 54% with CPU usage spiking between 50 and 70% utilisation.
Compare this to arcade, where even in a 0 player server, on top of the stairs next to Salmon Says facing towards super hoopers, I get bouncing between 60 and 70 fps standing still, with only 35% CPU utilisation, and 20% GPU utilisation. (This second test matches the arcade utilisation test I did in my first reply to this thread).

This low utilisation I’ve noticed also occurs in other parts of the plaza too. E.g. Standing on top of the fountain next to the “Tower Condos” sign indoors facing directly towards the Games Ball, gives me exactly 100 fps, with 38% CPU utilisation and 33% GPU utilisation.
This utilisation also probably backs up my statement on multiple cores helping out, since I’m guessing unreal engine 4 doesn’t prioritise most of the load on only 1 core.

Although I appreciate having more fps in the open plaza than the arcade, as others have listed in this post, with beefy pcs you’d think there would be higher fps, which feels even worse on higher refresh rate monitors, and likely effects the experience and gameplay for other players as well.

I’m not entirely sure what the problem is, but I’m hoping this information I listed here could possibly help the devs narrow down what the issue might be

Yes, i9s have more cores (8 or 12 depending on the model iirc) but I also have an i9 (an 8 core one) and my performance is pretty crap too.

Interesting, thanks for noting that too

I got about the same FPS as Bluenice2 did on Sweet Tooth and seeing as we have extremely similar builds, out side of the GPU, I’m goin to assume any results they get will be in line with what I get. I get around 150 to 180 FPS on average with any FPS spikes going around 125 FPS in my House condo that has a pretty good amount of items, including some workshop models, in it. Also including a fish tank with one of each of nearly all of the fish you can catch and all of the turtles you can buy. As well I have environmental settings maxed out on clouds, thunder, hail and wind, which I would assume would take up more resources as well.

It seems what ever issue is happening only really happens in the lobby, at least for me. I run V Synch, as to why it sits at 60 FPS, so with out it on the only way I can really get over 100 FPS consistently is if I literally do nothing and just stare out into the plaza.

Agreed 100% on what u said @archedmaid

Also for me I don’t get 125 fps in condo or gameworlds half the time since I invite friends sometimes so the fps gets limited to 60 xD
The devs already said that limiter is due to the version of unreal engine 4 that they’re running on so updating would most likely break stuff and I’m guessing be hard to fix unfortunately.

At least we gave our info to the devs in this thread, so hopefully it helps them with any troubleshooting or fps optimisations since I’ve seen them mention in dev posts trying to optimise maps in the past