As of now, Laser Tag is severely unfair and unbalanced. Blue team is always at an advantage of being WAY less noticable than Red Team, some playermodels blend much better with the surrounding than others, people camp in the recharging stations, etc. 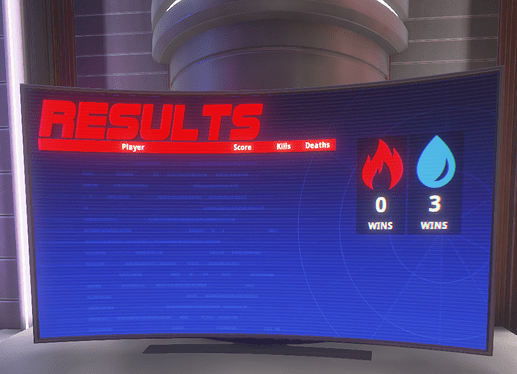 This is why I believe it requires some fundamental changes, most of them purely aesthetic changes.

-The enemies are always red. Red is inherently a more noticable and contrasting color, and as such, are always at a disadvantage. I believe the team names should remain, but the enemies should ALWAYS show up as red, with red lights, regardless of your team. This is used in games like CoD mobile, and works amazingly well to balance the game.

-Temporary invincibility after recharging. A lot of games of Laser Tag end up just being camping in the recharging stations. This invincibility should make it aesthetically clear that the player is temporarily invincible.

-Bigger, more noticable, set playermodels. As I said, regardless of team colors, a pink skeleton will always be more noticable than a blue human. IMO laser tag should have set models. I believe the skeletions would aesthetically fit very well, or there could be some kind of full suit model, the bulkier the better. The player models should also be painted the color of the team they’re in (So red for enemies and blue for allies).

-Changing the colors of the map: The map could be divided into teams, half the map blue and the other half red. This would make it so when an enemy is in your half of the map they’ll pop out more, giving them a disadvantage, and if you’re in the enemy half you’ll pop out more. These lights should though be noticably a different type of red or blue, so people always stand out and are noticable.

-Aiming: As of now, laser tag is pretty much just fast clicking whenever you see an opponent, aiming would make the action more dynamic.

That’s all, I strongly believe these changes would greately help the Laser Tag experience, making it a more dynamic and competitive game, and much more fun to play.

I’m inclined to agree with a lot of this, I proposed a similar colour solution in this thread:

In my experience with real life laser tag, the arena is sometimes split into different coloured quadrants. So one half of the arena is blue, and the other half is red, meaning which team has the advantage/sticks out more is based on where the fight is happening, which I like a lot more, and makes the map a cool component to gameplay. This might also lend well to future mutators or something similar like capture the flag or anything involving each team having a “base”. To me, the colour changing…

Honestly I don’t have many qualms with Laser Tag’s core gameplay, though I suck at literally any FPS game, so it might be hard to tell how much is me being bad, and how much is iffy game mechanics. All in all, I can’t really comment on the aiming/shooting part because I have no clue.

Invincibility frames and indicators for where you’re being hit sound good, just some simple quality of life, would make following a dead player less viable.

I actually really like the idea of a dedicated Laser Tag player model. I’m in favour of having Workshop player models usable everywhere, but I think that could work like LC and Planet Panic do, where you just become a different one for the game. It might be nice to have accessory support as well.

As I said in the thread linked above, I think the best way is to have the arena divided into 4 colours (The same colours as all the teams). Having the colours be client-side seems unnecessary, and wouldn’t really work when we finally get the other two teams added. An arena coloured in quadrants like that would be interesting for gameplay, and is generally the accepted standard for Laser Tag arenas in real life.

I’ll also add having Laser Tag be more of a global game (Like game worlds) might be good, obviously it’s a jump (Though it wouldn’t literally become a game world), but it’s more expansive than most Plaza games, and could use more players.

Thing is the blue team is always extremely unnoticable with the blueish tint of the floor and the walls, so they always have an advantage (And blue is, inherently, a less noticable color, and much darker too. Humans tend to spot red colors much easier). I was in a game recently where Blue Team always won no matter what. I kept trying to find blue guys but sometimes they shot me before I could even realize they were there, they were p much camouflaged (Unintentionally of course).
If teams are added, they must be very, very contrasting colors.

Perhaps if the quadrants also had floor and walls of the team color they represent we wouldn’t need to have the team colors be client-side, but as of now the blue team is, sadly, almost transparent in contrast to the walls and in a major advantage.

Yeah, there might be more to colour tinting than changing the lights, though I do think that recolouring the arena is the best option.

I did a quick check, and the current team colours (Red, Blue, Magenta, and Green) are all pretty well spread out on the colour wheel, so I suppose they’ll contrast quite well.

I think TF2 is big enough that we can say red isn’t necessarily the most easily identifiable colour (Or at the very least it doesn’t have an enormous impact), and with 2 more colours added, I’m not sure how a “relative colour” system would work.

I’m Jackpot, and I approve this message. I too have been outspoken on this.

At the moment the arena is mainly blue, which means that blue players blend in with the surroundings, giving them an automatic leg up on all the other teams. I think changing the blue to a white could work, and maybe shifting colours slightly so that no team stands out than any others.

Oh TF2 has other factors at play, since the entire map is not only unnatural red/blue colors but also map colors are waaaay less saturated than players, so everyone manages to stand out. Not to mention it makes people usually fight in the contrasting color (For example, red team captures blue points in blue base).
Laser Tag is generally all over the place with colors as of now, with lights of all colors and walls that don’t contrast.

TF2 uses Red and Blue due to their appearance in various colour blindness being very identifiable to tell the difference.

Which is one thing to mention, being careful with colour blindness in terms of the team colours in laser tag

TF2 aside, I just don’t know how it would work with more than 2 teams. I think just redesigning the arena with 4 colours in mind should solve most of these issues.

(Also, yeah, colour blindness should be taken into account with accessibility settings, I don’t know enough to say exactly which colours would be used though)

It’s not the consistency of them, It’s how easily you can tell them apart from each other

Look at protanopia red, Not really red is it :^)
Keep in mind that chart is very severe versions of the colour blindnesses

I never really like the thought of giving up my Workshop characters for a set model but in the case of PVP game modes it’s probably for the best. Maybe it could just be the skeleton retextured to look futuristic, like a Terminator or something.

In terms of color theory, the most contrasting colors are the ones opposite in the color wheel.
So ideally, the colors should be chosen by making a square inside the color wheel, thus choosing the four colors equally furthest appart from each other.

I think some of these suggestions would be great for Laser Tag.

The two suggestions I really like are the map being divided into two colors and the temporary invincibility after recharging.

The map could be divided into two colors (red and blue). Maybe they can even also be divided into four quadrants with blue and red on the 1st and 3rd quadrant respectively with orange and green in the 2nd and 4th quadrants. The quadrants will make for easier call-outs (if you are playing in a group). I like the idea of dividing sections into colors a lot.

I don’t necessarily know if I would enjoy aiming in Laser Tag. Instead of just clicking your opponents, you now have to tap/hold right-click and then tap your opponents. Having no ADS helps keep the game more simple and laser-like (think Counter-Strike and Quake). I also feel that ADS would not fit in a shooting game with extremely quick lateral movement. In a game like Laser Tag, I think aiming would just make aiming frustrating, as your screen will just get zoomed in and aiming (while zoomed in) at a person spamming ADAD without dropping below a constant speed would be difficult for most players. If ADS were to slow down movement, I don’t think it would fit in a game like Laser Tag either, as it would remove options such as prefiring angles as you peek and slow down the game. I do agree that every time I play Laser Tag, I spam left click as quick as I can and unless the below changes are not applied to the current Laser Tag Map then it does need a change. I think there are other ways to improve fast-clicking opponents other than just adding a conditional right-click, such as reducing the rate of fire (which punishes players for not taking the time to aim correctly).

I believe the Laser Tag map should get a slight overhaul. There are too many headshot angles in the map where you won’t even be able to see some players shooting from behind them at times.
The map is also a bit cluttered. When traversing the map, the game becomes a test of luck the moment you lose information on an enemy. You better hope you cleared the right angle out of a billion or you’re going to get shot in the back if you are on the lower floor. If you’re on the top floor, you better hope you’re not going to get shot from a headshot angle and that you have sound on to hear people shooting at you and stepping on the trampolines. There’s too much cover and while this may be okay for a high player count game, it becomes reduced to a competition of hide and seek when the game drops to the last three players. For this, I would like to suggest:

It would be good to play with different colored teams. Red & Blue are tired team colors, I would like to see different colors like Purple & Green to be used.

We’re doing that in the next update. Blue vs. Red is no longer the main team colors.