An internal debate has been going on with the PixelTail Developers. The topic of the debate is: Steam Marketplace.

While we have always stated no microtransactions, and will not go back on our promise, we feel that enabling Steam Marketplace would ensure our community a place for legal and safe methods of trading items through monetary means.

What exactly does this mean?

While PixelTail Games will never set a price on items, the community can create its own economy around the items where they see fit. PixelTail Games would never step in and alter prices or say this item is worth than that item. These prices would all be based on supply and demand by the community.

Why are you considering it?

There’s a number of reasons we have been considering it:

I’ve never heard of Steam Marketplace, what is it?

Steam Marketplace allows users to trade items in exchange for Steam Wallet money, but through a supply and demand economy system. It protects users when making monetary trades as both parties exchange money through Valve’s payment system, ensuring money is correctly transferred as well as the item.

What games have used it?

Most notably: Team Fortress 2, Counter-Strike: Global Offensive, and Dota 2. There are quite a few indie games as well such as: Killing Floor 2 and Rust. You can see the full list on the market page: https://steamcommunity.com/market/

Okay, what would this change?

Other than giving users a safe way to trade items for money, this would not effect gameplay at all. You’d still only be able to earn Units through gameplay (and you can’t trade Units at all), you can still earn all the items in game as well. The marketplace is there for those who want to safety trade items for money, but it is not required. You can still trade items with friends for free. Also, not all items would be marketable.

This is where you come in.

This is a hotly debated topic for us. We see the benefits for our community and the extra income could help us keep afloat a little longer. We also see how this could cross the microtransactions line and that’s something we want to be careful about.

We’d love for you to share your opinion on this matter. Nothing here is final, and our decision to use marketplace has not been decided yet.

Vote below, then please feel free to post your opinions.

We’d like this to be a very casual conversation and it doesn’t actually mean anything yet. Also the vote above doesn’t only determine if we use Steam Marketplace, we simply want your opinion in an organized way.

Amendment 1: All items in the in-game stores (that you can get with Units) will not be marketable.

Player should be allowed to sell their items on the Steam Market if they choose to.

Just an update, added the statement that not all items would be marketable.

Well, in order to have a market for these items, there’d have to be limited run, rare, or very difficult to obtain items within the game in order to justify this compatability. For example, a chair you can always buy for 300 U is probably not going to sell at all on the market. But, a 1/5000 Catsack drop item, now you’re talkin’. Youd need to consider that before diving into this.

E: If there were implemented items in the game solely for this, what would they be? Trading cards (sweet)? Collectible figurines (please)? Who knows. That’s a whole other thing. I’m personally for it.

My biggest worry is that in-game items will become the focus of the community over actual gameplay. This has already been seen at it’s worst with games like TF2 and CS:GO, and IMO it would not fit Tower Unite at all.

Why wouldn’t it fit it? People want items, so they can choose to buy them.

in-game items will become the focus of the community over actual gameplay.

The main gameplay is you playing games to earn money which you spend on for items. Isn’t it already the focus?

I’m totally okay with it. As you say, the market will most likely be created anyway, so what could be better than using SCM to ensure safety and convenience?

Many people don’t like this kind of “markets” around games such as TF2 and CS:GO, but I feel that they’re a great addition.

My biggest worry for this would be third party websites, but either way it doesn’t exactly matter to me.

EDIT: Items being sold in Unit stores are out, so yeah, now it sounds good to me.

No, I don’t think so. The thing is, the money on Steam is real money. Ish. So it will take priority and focus/attention above the items and currency in the game. Maybe a trading/market system IN the game with IN GAME CURRENCY would work out better?
I know people that play games like CSGO anf TF2 to get money, and not to have fun. I don’t want that to happen here.

We are adding the amendment that any item that is the in-game stores (aka you can pay with Units) will not be marketable.

So what items would be marketable?

I want to see SOME kind of intervention from you guys if this gets out of hand, though. Paying 200+ dollars for say, as an example, an extremely rare Catsack is just fucking absurd.

I want to see SOME kind of intervention from you guys if this gets out of hand, though.

I wrote this before @macdguy amended that only certain items would be Marketplace-able. Take that as you will.

I personally think this is an alright decision. As posted in the thread, and talked about in other places ever since trading was announced, there were always ways people where going to trade items for units (often for real world currency) from the get go.

Putting all this on the Steam Marketplace makes all that thinking redundant. The great thing about it in my mind, is developers get small cuts of every transaction on the Marketplace (all be it a small one), which can help would with development costs as well.

Looking at this from all angles however, I do see how some people can see these as either micro-transactions, or even a bit unfair. I can see some people arguing “Oh, well you can just buy “so and so item” on the Steam Marketplace so why would anyone play the game modes”. In my response to this completely made-up complaint, I would argue that people play game modes to have fun with friends more than they do to grind units.

So to end this post off with my personal opinion, I’m all for it. It doesn’t really affect the game in anyway in my mind, and something people need to remember is, at the end of the day, you don’t have to use it.

Well, the whole ‘turning around and selling for units’ ‘thing’ shouldn’t be able to exist. I think that items special enough to be sold on the market shouldn’t be valued on Units, to prevent placing currency prices. This makes sure people aren’t just buying units, which is something we want to avoid.

I don’t have a problem with the Market being used for TU. I can imagine only the rare items being Market-able, so the decision is left up to the players whether to pay a lot of money or to get it for free by actually earning it, which may be extremely rare or random. The decision the players need to make is whether or not that item is worth their time to get in-game. I hope that the Market is actually used for this game, because then I could have that option.

Even still, the Market is cool. It could bring a little more publicity to the game by simply having a Marketplace. I can imagine it looking something like this: 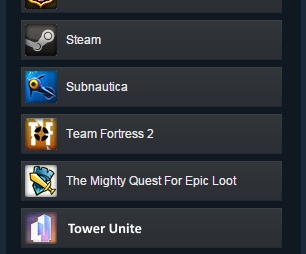 I couldn’t get the font right, but still. From this menu in the Market, people can see Tower Unite and perhaps want to learn more about it.

So what can be traded? Items made by cooking, fishing or treasure hunting then?

So what can be traded? Items made by cooking, fishing or treasure hunting then?