Graphics card crash after a few minutes of gametime

After a couple of minutes of playing (outside of main menu) the game goes white (my second monitor also goes to no signal for a second) and a pop up saying “Graphics card crashed and needs to be reset. make sure your graphics card is using the latest version” and then closes the game

I am currently using the latest version of my graphics card and it only happens when i play above medium quality, the game runs smoothly on any quality but then crashes after awhile.

anyways to fix this?

How hot does the graphics card get?

Overheating can easily cause a driver crash.

Ok, so that isn’t it. Have you tried reinstalling the drivers?

I don’t wan’t to risk it. knowing me i will mess something up in the process and break my graphics card

i have the exact same problem only i updated my drivers, its just that the fan goes really loud and after an hour or so its like: no fuk that and it kind of disconnects my monitor and i have to restart my pc

I might be wrong but perhaps this could be the result of a memory leak? If I have the game running for too long then it will certainly crash to the desktop, and I got 8 GB of RAM.

The game also uses a lot of VRAM from the GPU and 2 GB is barely enough because of how unoptimized the game is right now.

I have a GTX 750 Ti which has 2 GB of VRAM, and once I tried to disable texture streaming which resulted in a game crash pretty quickly once I ran around the plaza. Might have something to do with it.

Although if you run out of memory then it sounds a bit weird why the driver decides to crash.

yeah that’s what happens to me. the fan goes pretty loud before crashing

Is your RAM ok? This only occurs in TU right? If not that might be your Problem.

Ive got 16GB of ram, and yes it only happens in Tower unite

Hm, I have 16 GB of RAM, a Core i5 4460 and a GTX 750 Ti with 2GB VRAM and I have no issues. I’d blame driver or VRAM issues.
I had the game run for three hours straight today and everything was fine.

Im starting to get longer game times before crashes now, i opened up my graphics card control panel and disabled the overclock feature. i think anyways 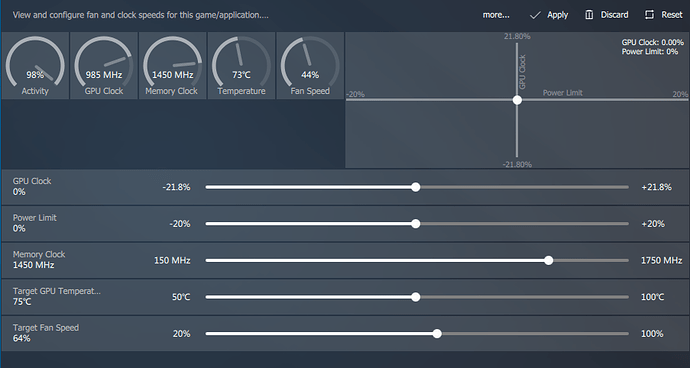 we tried to solve my issue in discord but literally all my specs seemed fine, so i don’t know anymore

If you have the same problem on other applications then that sounds a bit worrying. What’s the average temperature of the GPU when playing?