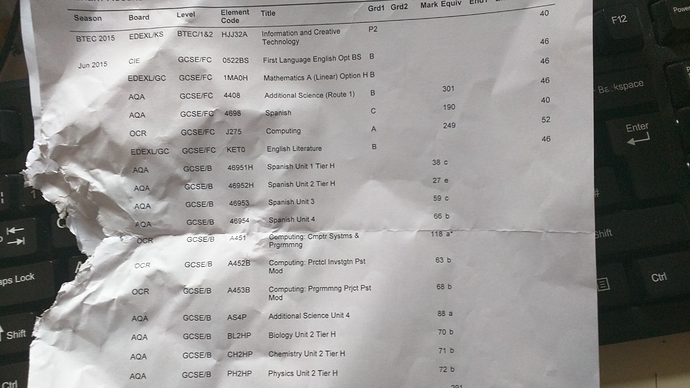 Dog: “No one will ever believe you.”

One of many reasons why I don’t have a dog.

I guess you could say he/she was…
…hungry for knowledge!

Lol, why would I destroy my exam results?

okay but you did really well good job

I know that sight all too well.

I got my C because my teacher was fired at the last minute for drinking and driving, thus canceling the final exam that I was like 2% prepared for.

Spanish is so cool

I’ll start having Spanish class next year. Should I be afraid or excited?

So many verb conjugations

As another native speaker, I gotta say Spanish is not an easy language (many verb conjugations, words genres, etc), but it’s also too rewarding, since not just few countries speak it. I’d be both afraid and excited at the same time =P

I always thought Spanish is easy as cake (even easier than English)? This comes from my dad’s experience atleast. He got a few spanish collegues at work he talks alot to, and my dad already has quite alot of basic spanish knowledge. That’s how I learned English to my current point, simply by listening to people talk English on the internet alot.

I speak Spanish, English and basic German and I can say without a doubt that Spanish is the most complex one. However, that’s just from the theoretical, academic point of view. If you like languages, learning it shouldn’t be harder than any other language

I have to agree with both, as I have experience in each of the three listed. Spanish is the most difficult, not even including trying to listen!

I personally don’t see how hard English is, but I am biased as a native speaker. If you think about it, though, we’re easy in many areas such as no gendering, simple conjugation, etc.

From those three, I think German is the hardest to learn (and that comes from a native speaker). Grammar in German is insane most of the time. Even I am sometimes having difficulties getting stuff in German class! Grammatical gender for example is a real mindfuck in German. Conjugation isn’t all that difficult, but most other stuff kinda is.

Love how we went from “Dog ate my exam results” to discussing the difficulties of languages.