Botter won the WoM i was on, anything gonna happen to him or?

I sent a few messages regarding this on discord but I’ll say it here to see if i can get a response about something I believe has been eXtremely unfair against me.

I have spent ~220 hours (of a total of 250 hours on tu) on one WoM slot, which i got from 120k to 560k within a span of almost 3 weeks, and now a player by the name eX, after sitting on the slot for about 2 days straight has won the jackpot and gotten the first spot on the leaderboard, i’m not making this post because i didn’t win, but since he was very blatantly scripting (afk, no responses to anything, doesn’t get off for 2 days) am I just gonna be left off with nothing but a middle finger from the slot? I can’t prove it since I was confident he wouldn’t win in just 2 days, but he did, will I get no compensation for this? Thanks, and have a nice day.

afk, no responses to anything, doesn’t get off for 2 days

unless there’s actual proof or you tried reporting him and the key presses look suspicious, i doubt this suffices as proof

you probably won’t get compensation for it, the casino is already a profit

and even if you were on that slot instead of him, that doesn’t mean you would’ve gotten the win.

Most people look like they are botting in the casino due to the fact they turn off sound and the voice / normal chats.

ballrace can be rng also

things like the star trampolines, etc sometimes bounce you in the wrong direction/not high enough

Damn, I don’t like them maps with them anyway, I prefer midori

I think the main point here is also being a bit neglected, which is the fact that a clear botter got the jackpot.

On a sidenote, the player in specific - eX - is someone I already seen do this before, where he also landed a jackpot on WoM, by completely taking over the machine for about 1 -3 days. And it was the same thing, no responses, no nothing, I mean, I think everyone can clearly recognize a botter after a while.

And I think thats what Egossi was mainly stating, or at least, I am.

Even if someone doesn’t have their chat (both voice and text) turned off, they aren’t obligated to respond to you; this is a social game, but communicating with others is optional. If you see someone in the future who has suspicious-looking behavior, like no head movement and instant keypresses, record it and report it to the devs so they can look into it. It can sometimes feel shitty to see someone benefit from the time you spent in the casino, but I think that’s just part of the risk involved.

The person who won may also be doing this as a mindless task. When I play for jackpots, I put on YouTube or a movie with my game in a small window, pressing the button repeatedly along with the letter prompts. I never read chat or look too closely at the game when this is going on- I even have it muted.
Edit: Maybe the 2 days straight thing is a bit much to believe, but was it really a full, continuous session? Or was this hyperbole?

I knew someone that had a roommate and switched off to basically play 24/7. I wouldn’t assume they’re using a script yet, but they could be

@EvKem @Umbra when i say 2 days straight i mean no breaks (or at least seemingly as mentioned by 3 different people so far including me) including no sleeping, no eating, no actual breaks and no afk time at all, its very unreasonable to assume he was not afk and just didnt read the chat, move his character, his camera, read chat or write anything ever at all

But like it was said, this person, took 0 breaks, for 2 days +. It’s not humanly normal, unless, like it was stated by umbra, there was more then 1 person, like a roomate or smthing. If not, that was 100 % script imo, mainly due to no camera movements, thats the cherry on top of the cake for me. Cause talking and reading chat, hell i dont do it most of the time, but the head… no movement of the head, ALWAYS.

During a period where I AFK’d the slots for probably 20+ hours in 2 days while catching up on a series I did see them on a machine for at least 99% of the time I was there, the 1% being when a server crashed and I made it back before them. (and i yoinked their machine)

Although during that period of time I did in the corner of my eye (the game was in the lowest possible res on my 2nd monitor) notice people gathering around me and them on a few occasions. I didn’t once talk in voice chat (game muted) and I think I might have typed in global chat once during those 2 days.

My point here is that while it is possible to assume someone on a machine is botting, it’s impossible to really get confirmation unless they fail an AFK check and spam jump at spawn or something.

I assume that probably everyone who sits on the slots for hours without communicating with others gets reported for macroing and checked by the admins, however. Especially this guy. And if they’re still there I’d assume they’re clean?

Also, the “no camera movements” argument doesn’t really make sense imo when all you have to do is press spacebar and the occasional button check. At least for me I just alt tabbed in and out whenever I was switching videos or streams.

I will say that I feel your pain, sitting hours on a machine just to wake up and see it was won is pretty unfortunate.

Seeing as how im not even getting a single response from devs i guess this is it for me with tower unite, i would expect a dev to at least give a response rather than let it sit and leave me in suspense, i dont know if you understand that i literally spent a little over 2 weeks on this one slot machine, 220 hours is so much time its insane to me there are other people who do this, for even longer and still not win, even if the response is a “There’s insufficient proof that said player was botting, therefore we will not take action” this is just annoying

i meant to put this up earlier, anyway
if you wanna make a report on someone who is breaking the rules you merely head into the tab menu, find their name and click on it: 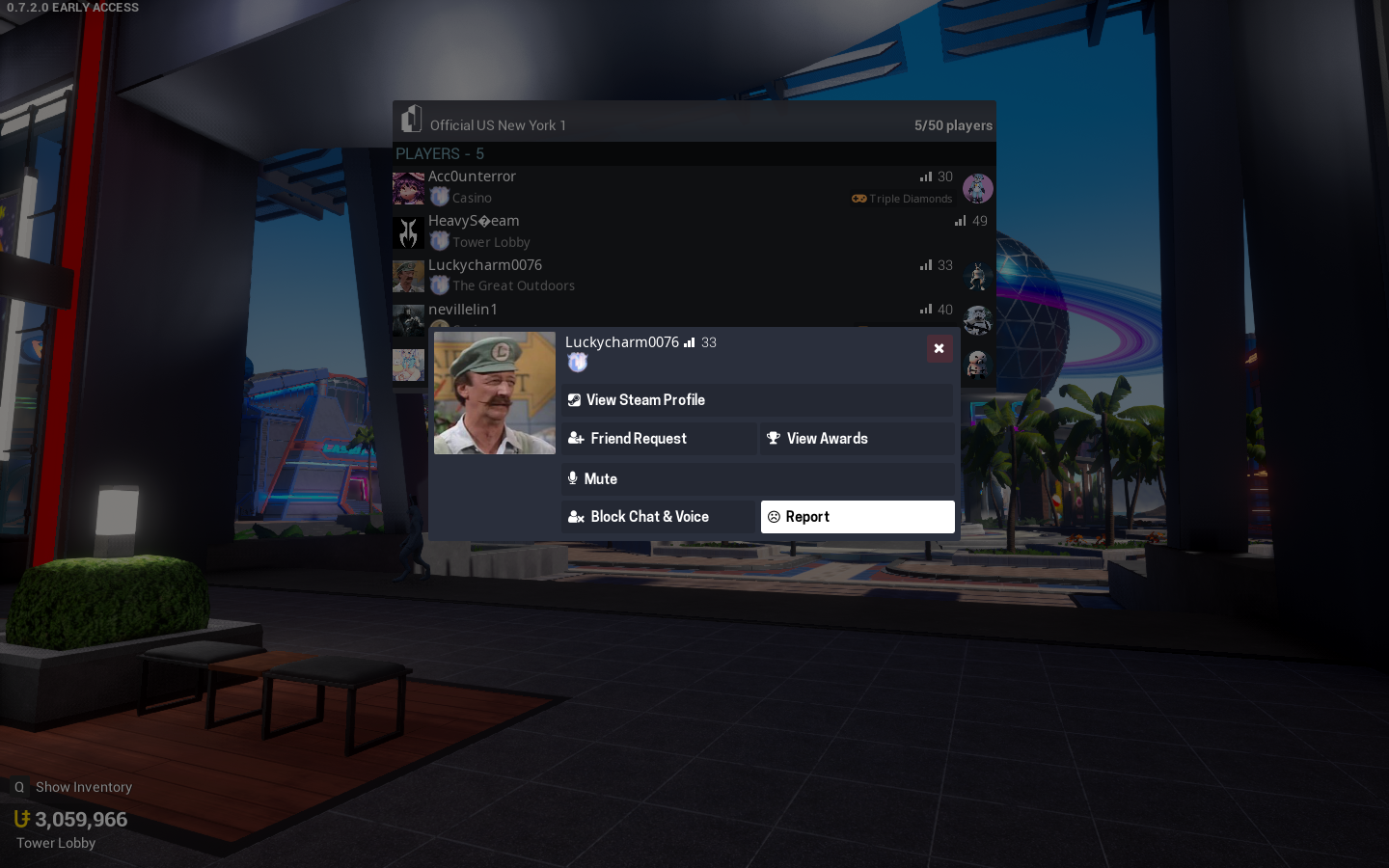 If you arent in the same server you can also select their name in the chatbox if they have said anything. 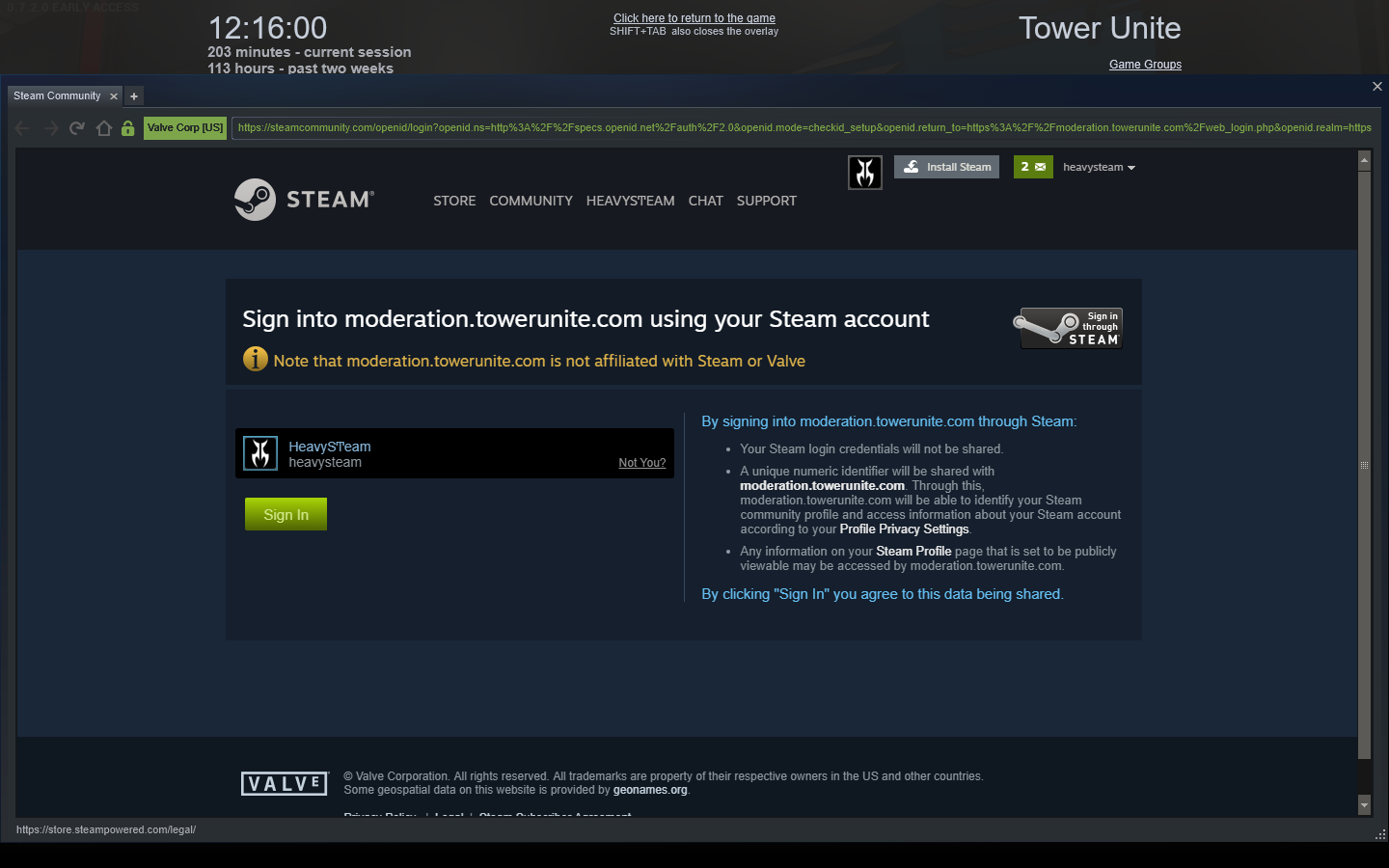 Here you will have to write a report message that will be sent to the devs, best course of action is to tell them what rule the person is breaking. 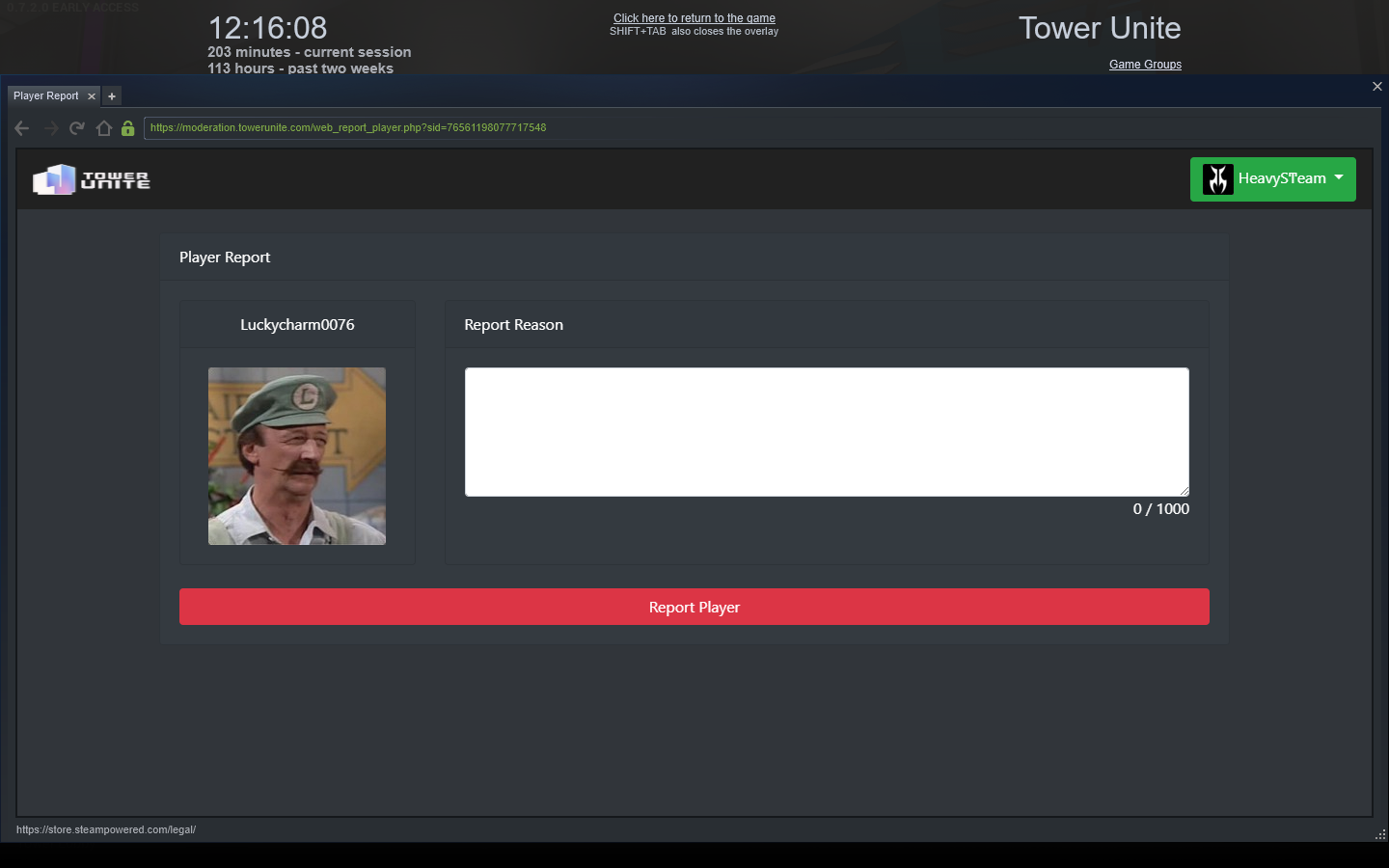 When the message has been written click on the report player button to send the report. 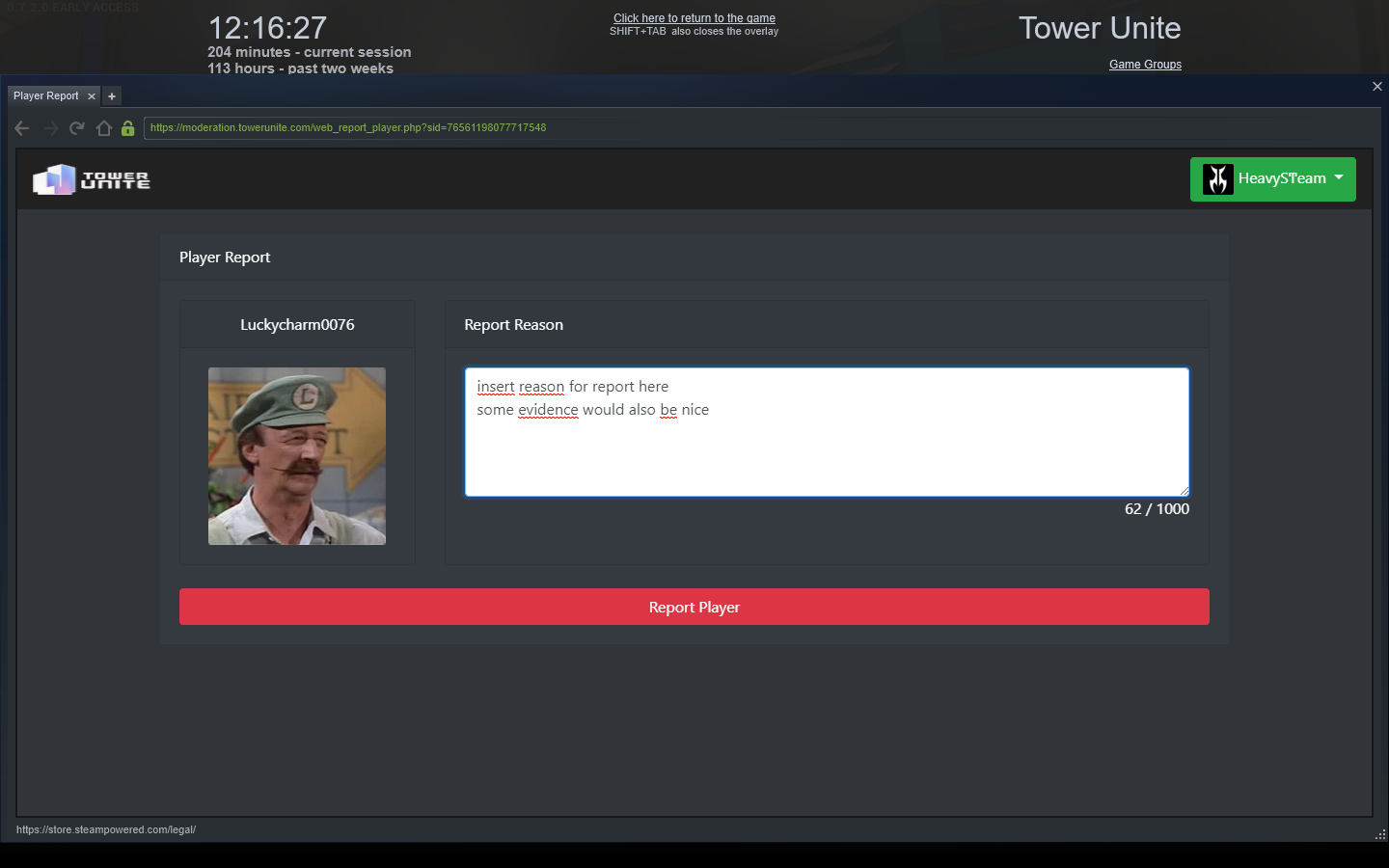 and incase you’re wondering about the system that decides if you win a profit in the casino, here ya go:

"What the heck is an 'AGC', and what does it have to do with Casino?" Developments

I’m sure this is the question you’ve all had in your collective minds upon reading the Trello card for the Casino. Fear not! In this thread I shall explain this mysterious piece of tech that I’ve spent the last few months working on. What does ‘AGC’ stand for and what is it? ‘AGC’ stands for Authoritative Game Coordinator. It is a back-end system that runs game logic outside of Tower game servers. Ok, but why is that important? The Casino is a component of Tower that handles betting player c…

We are gonna need more information on the user. You’ll need to DM me the player’s Steam ID (a name is not sufficient), some sort of proof they were macoring, the jackpot amount, and proof you were on it as well. From there we can investigate and see what actions we need to take on the botter (if there is a case for it).

However, the jackpot isn’t something you are owed because another user got it, regardless of a bot. I can’t just give you the entire jackpot. The next update will have shared jackpot so each machine doesn’t have it’s own jackpot and there’s no longer this sense of ownership per machine.

He’s on top of the WoM leaderboard so i figured you wouldnt need steamid, and im not sure if i can prove any of that except for having a lot of witnesses (not sure if my casino xp and my purchase date would qualify as proof for me having spent all that time but theres a lot of people who would confirm this) and im pretty sure the jackpot amount was something between 570k-580k

And yeah of course i wouldnt just expect the entire jackpot for free, i would expect something more like the botter being banned, jackpot being restored to the machine etc. And if none of that is gonna happen then i would at least expect some sort of different compensation, anything would do really

As for the proof of him being a botter, i got nothing for that either except for witnesses (who have said they reported him also as he was on the machine), the only reason i didnt report him was cause i was for some reason convinced he wouldnt win

watching him on the machine isn’t really proof anyway. unless it’s video footage of him sitting in a corner repeatedly jumping or something

So you mean unless the botter messes up and his script fails to press the button, it’s completely impossible to prove that a person is botting, therefore we have to let botters with successful scripts get away, or do you suggest i record him for 2 days straight without fail and present that as proof

He has been reported (by at least 1 person) before he won the jackpot as he was sitting on the machine, so i guess its just up to how lucky a botter is whether or not he gets banned, which in this case he was pretty lucky because if he won in a day or less we wouldnt even be suspicious, but if he kept going for a few more days then it would fly over the radar

I dont have much else to say but i and a buncha people feel this has been very unfair, I’ll leave it at that, thanks for the responses.