Always looking for folks to play some League of Legends with. My IGN is Based Talon and I play on the North American server.

Send me a request if you’re up for it!

Ah, damn. I really do need to make a EUW account so I can play with all my friends there. Ping’s probably the same as it is here x_x

Will do! What’s your IGN?

They’re not for everyone. There are often times I hate them myself.

Anybody on OCE? I’m Xicious on League too.

From all MOBAS, you chose that one.

Oh boy, there’s always got to be that guy. 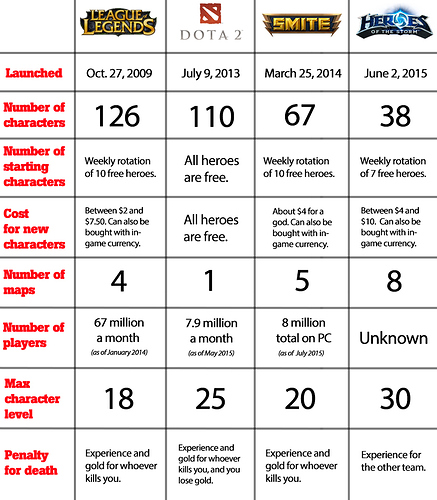 An objective grid of the four most popular MOBAs.

I’m still at a loss here.

Edit: Smite’s rotation is actually five per week as well.

@butilka4
Okay, statistics.
Your point is?

Note also the 100% premium skins, whilst DOTA 2’s items are also acquirable through means of playing.

Also, DOTA 2 requires more skills than LoL - add to this statement also how LoL pretty much babyfeeds you with buffs from the Rune system and everything, which make you OP (Especially T3).

Ah, yes, the one pro to Dota 2, having all heroes for free. Can’t argue that’s great, but that by no means makes it enjoyable for me to play.

You’ve got a very dim and ignorant view on League. Dota may be more difficult to play, but that doesn’t make a game better or enjoyable to players

I mean, I don’t even understand what you’re going on about with runes. You don’t get to be special and have runes while everybody else is running a blank page. Everybody has them, so it’s effectively balanced out. At this point everyone’s getting “babyfed”.

Just play what you want to play. I don’t see the need in shitting on others who enjoy the alternative.

To be fair, my first MOBA was Dota 2, and I consider myself an avid player with a good few hundred hours sunk into it, and I still prefer LoL after trying it.

I consider Dota 2 slightly more difficult and serious, whist LoL gets you into the action faster. It’s really just a matter of preference and neither is better than the other because of these differences.

Agreed. I think both games have their pros and cons, their own distinct styles of gameplay. Both are great games. People forget that their personal preference isn’t law sometimes.

You should add me on Steam if you want to arrange a playdate with me, though. :3