I remembered the past suggestion of getting expansions to the current Wowozela instead of gaining new themed Wowozelas in the future (such as the Spooky Wowozela and the possible Cosmic Wowozela). While thinking of that, it made me think about some of the lack of QoL on the Wowozela. One of my biggest gripes is the lack of categories… with everything just being in a long list that you have to scroll through.

So of course I made a quick mockup! 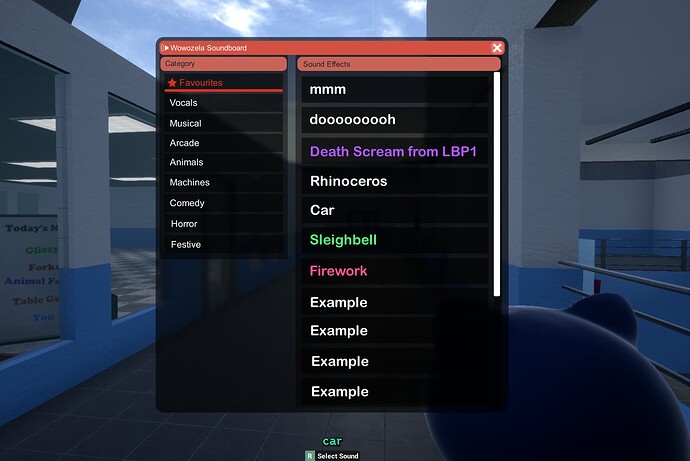 image1660×1111 88.4 KB
First of note are the categories… which are pretty self-explanatory. I tried to divide it into the most concise categories I could come up with.
Second of note is the addition of Favourites. It’s pretty annoying to have to scroll through the long list to find certain sounds you prefer, now they’d be collected in the first category (allowing for quick access).
Finally is the colouring: colours correspond to each Wowozela expansion the sound belongs to. I made three examples here: Purple (Halloween), Pinkish (Anniversary), and Green (Winter).

An extra suggestion is the idea of “Cartridges”. Each Wowozela expansion you collect comes in the form of a Cartridge that you can also place around your Condo (for bragging rights of course). This would add another category of collectible goodies to the game (alongside crabs, trophies, plushies, etc).