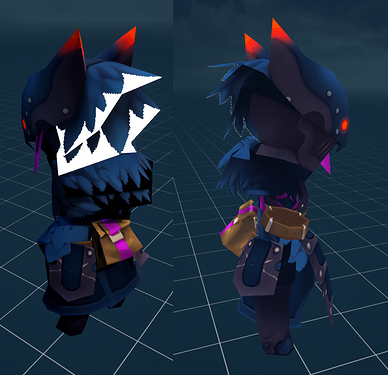 workshop transparency broken.jpg1072×1033 260 KB
Here you can see two images of using alpha transparency on workshop textures, the first is without alpha ticked in which it displays white blocks and black blocks, this is probably intended so it’s fine, however, the second shows alpha set to on and glow to 2.0 (As alpha also darkens models). As you can see, the bottom of the mask displays on top of the fur going around the mask, similar issues happen around the chest.

Darkening has been visited on another thread and it was apparently due to unreal itself, so that isn’t bad and can be fixed with glow settings, but other threads approaching issues on transparency didn’t seem to address this specific bug.

As the one working on this model. I can say that several different methods have been attempted to get rid of this. Using the knife tool leads to having to re-weight, or just straight up broken weights. Editing the textures has led to several dead ends. And I am not the only one trying to fix this, counting Lavendar there is roughly 3 or so of us. So it does seem to be a bug related to TU rather then a botched modeling job.