So. Right now, especially aftrer new and great update aired, the problem that bothered me before, became even more explicit.

I’ll be short and straightforward, no long disputes and monologues. Simple example - for a game of Super Hoopers, which requires at least some attention and aim, you get… let’s say, around 100 tickets. For the game of avalanche, which requires you to be fast and have precise aim, you get around 500 tickets. For nearly all new machines (Dragon’s Treasures, Ultimate Cow Wheel, Coin River) you get 1000-2000 tickets, just by pressing one button, and even without thinking much.

So, I don’t want to say anything wrong at all, games and ideas overall are great, but… maybe there should be some balancing, some slight rework? So that all ticket rewards would be on the same level? I dunno, I may be mistaken, and that indeed sounds like utopia, but that’s why we have that sub-forum, for ideas and suggestion. I guess😅

Thanks for that great update, devs, looking forward to new horizons!

Super hoopers can get you over 1000 per game. Avalanche also gives somewhere around 600+ tickets.

Dragon’s Treasure and Coin River both take a while to complete a round and are also insanely expensive to play. Cow Wheel typically gives about as many tickets as a round of Super Hoopers can give you, in about the same amount of time. (that’s assuming you only go for letters/500 and dont miss)

Wait, just a sec, 1000 in Super Hoopers?
I hate to say that, but proofs, please. I have an ordinary aim, getting pretty much hits in a basket, but my maximum payment was like… 200 tickets? And that was really something special, my usual payout in that game is around 50 tickets, no joke. Maybe I am just awful, I agree. But… 1000 tickets?

I’m inconveniently away for a vacation now so I can’t record a video but you can get a ton of tickets if you just keep throwing basketballs into the hoop without stopping to aim precisely, the hoop moves in a preset pattern each game too so you can memorize its movements and aim ahead

the people who are really good at super hoopers make closer to 2000. 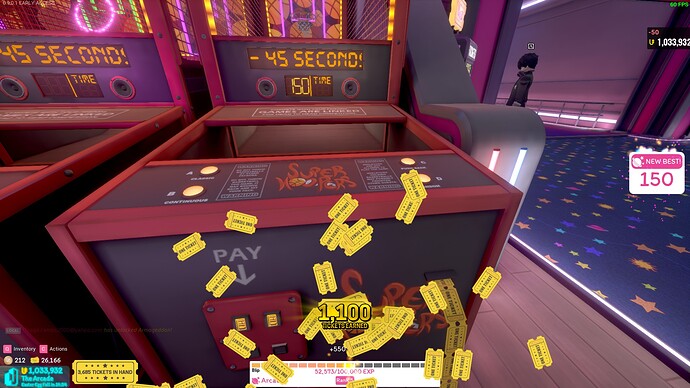 This is an old screenshot as I haven’t been playing Hoopers much lately, but I have friends who can consistently get 1400 and above as well
Phase two of the arcade was really helpful for overall balance as well, and I think most of the games can be a way to “farm tickets” if you’re so inspired to do so

I think the point the OP wanted to make is that there are games which are still heavily easier to grind the tickets in that the others, which may feel odd 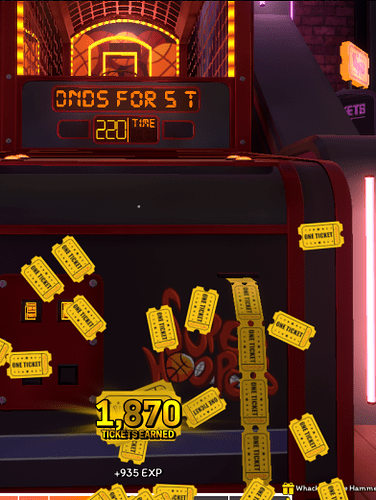