I’ve known Kendall’s Flash video way back in 2002, before Albino hosted it.
Was it a thing you developers enjoyed when you were younger?
Of course adding Zeeky and Flooby was the right thing to do.
Kinda wish there was Blah Guy, but that’s just me.
Speaking of Flooby, it needs the iconic “dodododo-dodo whee” sound someday.

For those not in the know, TDCM stands for The Demented Cartoon Movie.

I love not knowing what any of this means. This post is just completely incomprehensible, but I’m not complaining lol

For clarification, they are asking why the Third-Party Plushies in the Arcade are characters from a 2000s flash animation, and why they got added in particular

Didn’t notice the subtopic, Mac. Thanks for moving the thread.

It’s just that… of all things online, it was an odd thing for me to see Demented Cartoon Movie stuff, let alone an official collaboration… of sorts.

We reached out to various flash animators to collaborate and make third party plushies with. Josh and I were familiar with TDCM and thought they’d be a fun addition, and Kendall gave us approval. It’s an older flash animation now, but back then when we were younger it was pretty popular (and silly).

We aimed to get third party plushies from the flash era of animation because we have a fondness of them and the creators, plus we think it’s so cool to be able to feature these characters we grew up with. The entertainment on the internet at that time was all flash animations. It’s really cool to have them featured in Tower, and alongside other famous flash animation characters as well such as Fancy Pants, Brakenwood, and the Albino Sheep itself. I’m honestly so stoked to have them in Tower.

Kendall also had some odd things back then that he hosted; he had a Final Fantasy victory fanfare remix up on the site then, but then I lost it after the site went offline. Talked to Kendall before (such a nice guy) and he sent the MP3 over.
But wait, you mention Brad’s FancyPants… he’s here too? 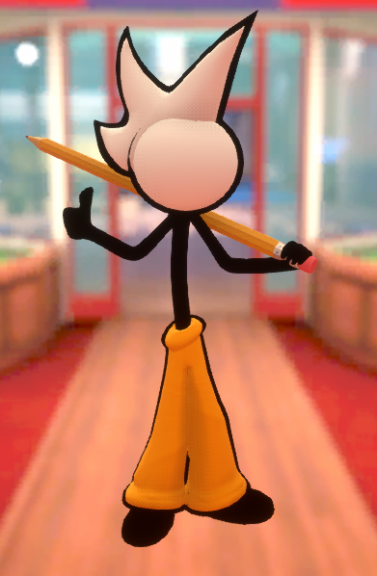 Anyway, what was your favorite Demented scene?
I got many, but my wife enjoys the Mars trip scene.

But oops, I accidentally pressed the H-Bomb button!

Fun fact: this isn’t the first appearance of Fancy Pants. Well, in TU, yeah it is but Good Tower had a Fancy Pants Adventure machine in the arcade. Was so excited to see an actual “official” appearance in TU

Do you or Josh have any fondness with Homestar/Strong Bad series of flash animations that could maybe one day in the future lead to something? I feel like a good amount of those characters would make for cool plushies with their distinct shapes, or even an exercise ball reskin for Pom Pom.

Dude, I’d love a Strong Bad plush that sings Trogdor when you interact with it.

Do you or Josh have any fondness with Homestar/Strong Bad series of flash animations that could maybe one day in the future lead to something? I feel like a good amount of those characters would make for cool plushies with their distinct shapes, or even an exercise ball reskin for Pom Pom.

sounds exciting… i’d love to see strong bad so much!

Would be cool to add Alien Hominid or something as well, given the nature of Flash games then.

I was one who’d be on other Flash video sites, like Razoric, Video Game Director’s Cuts, etc., with the whole Mario vs Sonic shizz.