So GMTower will discontinue when Towers Unite comes out. Alright, I get that.

But can other players/Communities run standalone servers of their own? Without any funds or such?

I’m honestly gonna be bummed when I lose my customized suite.

Nope…It’s all disappearing, and they’re taking the content off of the workshop. I’m sure some group of diehards’ll come along who don’t want to buy Tower Unite and resurrect it using their own textures, but I dunno.

Players will not be able to host their own GMT servers when the mod shuts down. First off, it would be direct competition with Tower Unite, which is bad from an economical standpoint (especially since they are technically competing against themselves, which they can easily prevent). Second, it is a pain to host GMT servers. It’s not just one server; it’s multiple that need to communicate with each other. On the plus side, the workshop items aren’t going down, so you will still have the playable piano.

As for losing your customized suite, you will be able to transfer your items/GMC into TU, so you won’t need to re-earn everything if you don’t want to. You will need to redecorate, but that’s nothing major.

As long as I don’t loose my suite, I’m cool with this. Thanks again.

How will I be able to transfer my items/furniture?

As far as I know, it’ll be there when the game hits early access, when you first launch the game it’ll have a window with a couple of options: Transfer, and start fresh. You’ll only get the items that you own that aren’t subject to copyright infringement, however.

There are custom canvases that let you put any image you want on them. So, technically, they still exist.

Sweet. I’ll admit, I’m gonna need time to adjust to the new engine. (The characters just don’t sit right with me) But this is GMTower on Steroids. And I love it!

and they’re taking the content off of the workshop

It’s funny, I just posted about this. 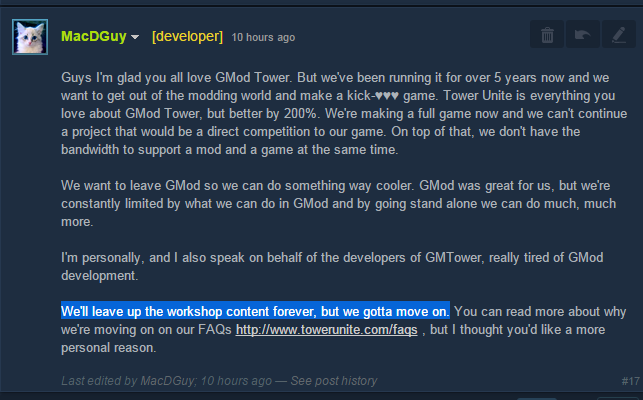 Anyways, to add on to what was already said we won’t release GMod Tower’s sourcecode, ever (it’s closed source). We’re done with GMod.

Not to mention that hosting a Tower server is literally an ENORMOUS chore. You need EIGHT servers running all at once. And we hosted two lobbies, so double that. And don’t forget the MySQL databases to go with it.

Tower Unite needs only one server to be hosted by you, we handle the rest. It uses less resources, it’s hosted ANYWHERE in the world that you want it to be hosted, and your player data will persist between any of these servers.

It’s just better. You really can’t put it any simpler than that.

Let’s see how many people will try to leak it and then host their own servers, a thing which has already been done during the time GMT inactivity in 2012. Despite the fact that it’s a pain to host it. Someone will most likely have the patience.
How much and what will we do against people who leak GMTower exactly?