Hey guys, and hey Caboose! I made an account recently to post this up because I’ve been playing a lot of trivia and I feel that I’ve played enough of it to make a few assessments (as politely as possible)

I understand the focus is based more on making an environment that everyone can enjoy, and I should be speaking on behalf of everyone that the work you chaps have done so far is fantastic. But as far as the trivia goes it has a lot of untapped potential and could spark a sense a friendly competition among your community.

So here I’ve been labouring all evening to write up a few of my ideas that I think will help make trivia a minigame more people will go to to earn money and have fun.

The trivia game at the moment revolves around a series of ten questions, where players answer questions within a time limit and earn points depending on how quickly they answer, where incorrect answers reward nothing. There is nothing wrong with this model and it is perfectly fine and it is proof that the API is working as intended.

What I would suggest is three new modes to replace the existing base game: 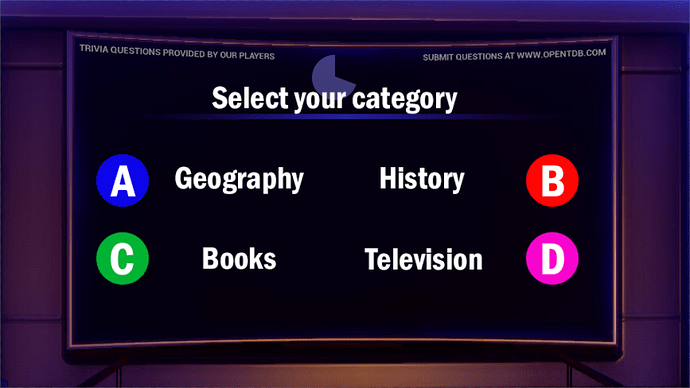 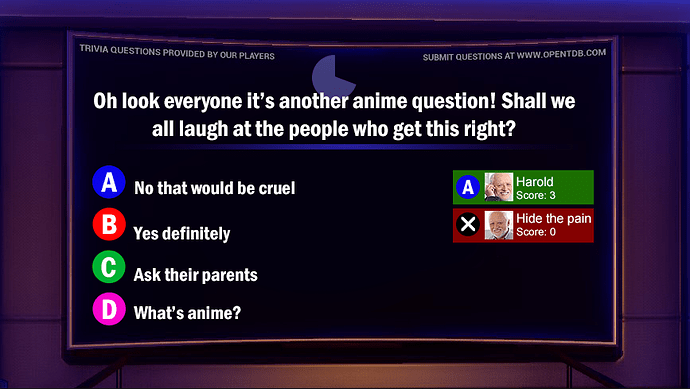 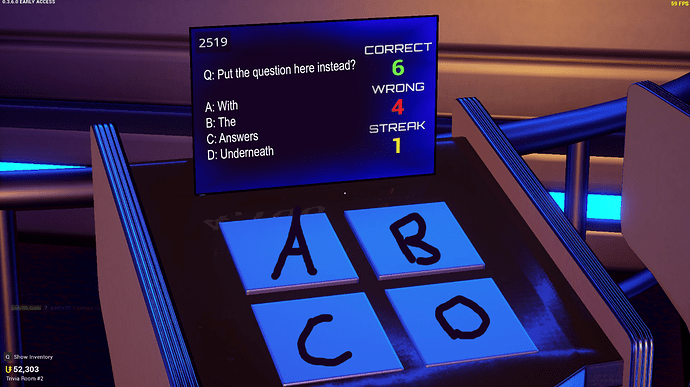 At the moment you are rewarded a “Thanks for playing” bonus of 200 and a set prize, maximum being 700 units. So you get a total of 900 points for winning first, regardless of how well you do. The new scoring system I’d like to suggest rewards players that a) win with a larger score b) do consistently well in streaks and c) answer correctly quicker. In short, I would like to see a system that rewards the winner generously but it’s possible for the runners up to achieve bonuses for the way they play so they don’t feel their efforts were wasted.

I have made the following hypothetical changes and additions to the current scoring system to help my balancing.

So with this new math, let’s apply the scoring to a few of the games I played earlier tonight and see how much I’d make.

The first game I did, I was fairly lousy. I got only four questions right, but I managed to get three questions in a row right. I still won the first place prize against another single opponent.

So in total, I receive a prize of 1040 units. In addition to the 200 unit “thanks for playing” bonus and the new 300 unit bonus for my streak, that means I now have a total prize of 1540 units. This is not an awful lot more, but still. Let’s assume that I played got the exact same result with the same maths again but lost.

So I lost and only made 40% of my units, but on top of the “Thanks for playing” bonus and the “Streak bonus”, the total payout is 916. Now I’m hoping it won’t feel like a waste of time to the player because we pointed out that he had a streak and he did a GOOD!

The next game I play is a belter! I knock everyone out of the park because I’m well on form and I’ve memorized all the anime trivia.

So the base prize is 1960 units, plus the 200 “Thanks for playing” and the “500” streak bonus, let’s say that I got the most answers correctly out of everyone as well so that earns me another bonus of 700. In total I would earn 3360 units for this game of trivia, and given that a round is quicker than bowling that puts it in around the same sort of level.

Let’s say that I’m the God of anime now, just for fun.

As you can see, there’s no way people are gonna give up grinding casinos and bowling, unless they love trivia ofc.

I understand that Tower Unite is a big game and the trivia is only a small part of it, and I don’t really have any experience that can help you code. But what I can do is curate the database and do the legwork and research trivia and add more questions.

I hope you guys take my suggestions into consideration, I’ve been a big player of GMod Tower back in the day and I’m so happy you’ve got this project now!

There is an overabundance of trivia about anime and video games

While I know a lot of people hate anime, I much prefer these questions to “What is the romanized Japanese word for “car””
and other obscure questions like these. Ok I skimmed through it now, I’d like to see the voting for category in all these modes.

I’ve read everything here, and I think Head to Head mode and Lightning would be fun! I like the new payout system too, Trivia doesn’t pay out enough in my opinion.

Honestly everything looks good here. I just think: Would it be possible to get more payout by spamming “C” in lightning mode? Or would it pay more to take your time and answer correctly?

I would say no since the maximum amount you could win would be locked at 2500u for that mode. And even if they do spam a) it’s more probable that a person getting the answers right could beat them and b) even if they do, let them because it’s just not profitable to do it that way.

I honestly prefer the game mixing questions from all the categories equally. That way, the one smart kid who’s playing a videogame for the first time in his life doesn’t get screwed over when everyone votes for “Entertainment: Video Games” every round.
I agree with the extra gamemodes, as long as voting for categories isn’t included.
I agree with the rebalancing, but I think you might have buffed it a little too much. Still, I think it’s much, much better than the system we have currently.
What about the >50% correct and 100% correct bonuses? I do get that they’d be obsolete with the new per-correct-answer payouts, but it’s weird to me they didn’t get mentioned.

I honestly prefer the game mixing questions from all the categories equally. That way, the one smart kid who’s playing a videogame for the first time in his life doesn’t get screwed over when everyone votes for “Entertainment: Video Games” every round.

I don’t think that wouldn’t be too much of a problem for my head to head concept (which is the only one I’d like to see a category selection really), since if the rounds are short and a new category gets put in place, that one hypothetical smart kid can really clean up and win even if he gets locked out of the first round when everyone picks video games.

What about the >50% correct and 100% correct bonuses? I do get that they’d be obsolete with the new per-correct-answer payouts, but it’s weird to me they didn’t get mentioned.

I don’t understand your question sorry.

I don’t understand your question sorry.

Ah yes, I’ll have to either redo my math or have that bonus scrapped completely, and given how my math would (in theory) reward players getting answers correct quickly and consistently, that’d probably be necessary. Thanks for that

I can’t honestly stress how much of a difference this would make since it is quite a popular game mode.