Something about the steering

Just a preface, I’ve struggled between putting this in bug reports and here in suggestions, because the mechanic seems a bit unintentional.

Alright, I’ve only just gotten around to playing the alpha after being away for a while, and during my hiatus I played a lot of racing games. I’ve gotten sort of a feel for them, and after playing a few rounds of Accelerate on Pine Valley (and just now Bedzoom) I immediately noticed that the steering felt a little… different.

Now, to illustrate what I mean, it feels like at all times I’m moving forward, but I can strafe/turn left and right at the same time, versus travelling in the direction i point my kart.

Here’s a crappy illustration that I hope shows what I’m trying to say: 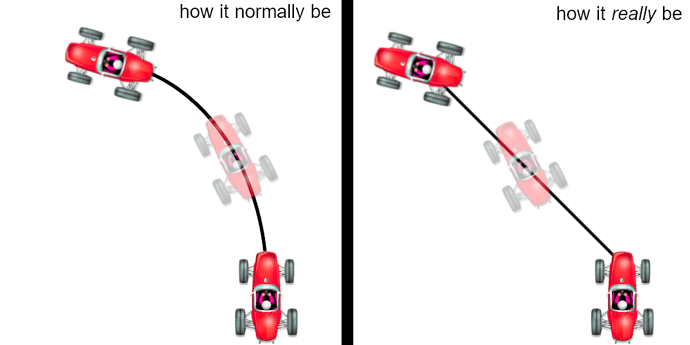 Steering like this sorta makes it feel like tyres are ineffective, and taking corners results in a lot of “tapping” inputs to make it move more like a curve, which I find myself doing even with analog inputs on my xbox controller.

I may be entirely in the wrong about this. Steering in Accelerate may actually turn out to be more like the left of the diagram, and the right is entirely non-factual. I have no idea.

It feels like 4 wheel steering, like some high performance vehicles pioneered in the 90s; all 4 wheels turn in the same direction at speed.

this is how i drive irl

i don’t have my license yet

This was exactly what I thought of too!! I figured that describing this in my post might muddy the illustration ive made so far, but that’s exactly it.

As it stands for the karts in tower, though, only the front wheels turn, so we should have a kart that goes forward first, and redirects where forward is, instead of sliding where we point.

That said, I’m not a fan at all of how it feels lol.