Out of curiosity I’d like to see what people think of the recent change to the RC car.
For those not in the know the RC car was drastically resized to be proportionally realistic to the player, some would argue this is a good thing and some would say otherwise.
I wanted to set up a poll to see what the majority prefer.

Personally the new size makes designing tracks far harder, it takes turns incredibly tight making races less of a challenge of controlling ones speed and instead turns it into who can hold accelerator for longer. In addition the resize made the RC car far slower. Due to this, going over simple canvas items can be a rather daunting thing as it physically struggles to get over the smallest of bumps.
I know the new size is proportionally realistic to the player, but it’s not all that fun to use compared to what it was.

tbh the old size was way to big,
the current size doesn’t look GIANT compared to my player model like it does now so i prefer this one, although i think something needs to be fixed with how it cant drive up steps and such like it could before since now it makes it much harder to use to drive around places, but before i think it was a bit too big 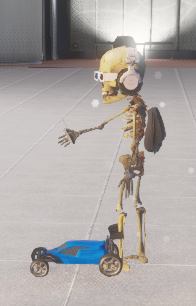