I have a friend who joined after Planet Panic was canned and we’ve discussed the Game World in great detail. I’ve compiled some of our ideas here and will be linking other Planet Panic Suggestions threads here for ease of use. If you have any ideas, feel free to either add them to this thread or link this thread to yours (so they can all be connected)!

The Issues of Planet Panic
Even in the time it was playable, Planet Panic was noticeably unpolished (I believe it even used Dev textures for some time?). With few and small lobbies, its gameplay noticeably suffered. Some issues in my time there was the lack of strategy and somewhat tedious gameplay. It also really didn’t help that there was only one map.

The Suggestions
I’ll start off with the most important piece of this suggestion, the Classes! 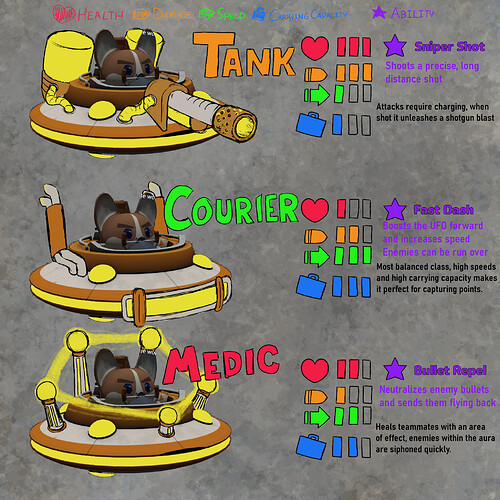 image2048×2048 989 KB
In order to promote teamwork and diversify gameplay, three classes would be added. Each are made unique by giving a Passive and Active abilities while also reshuffling their stats to match their needs. The variable stats are Health, Firepower, Speed, and Orb Capacity.

While each class works well together, a hellish free-for-all is still possible. 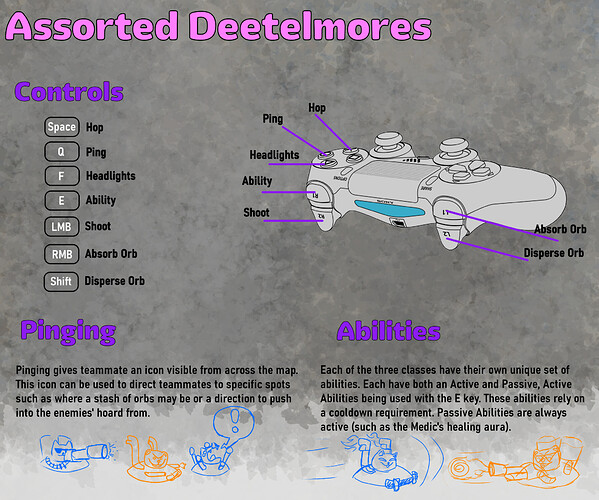 image2048×1707 724 KB
Beyond just classes, there are fundamental additions to the foundation of the gameplay. Pinging is used to help teammates easily and quickly communicate without voice and direct attention to specific points on the map.
Other additions could include rewarding kill streaks with an extra orb (3 downed enemies gives the team a captured orb). 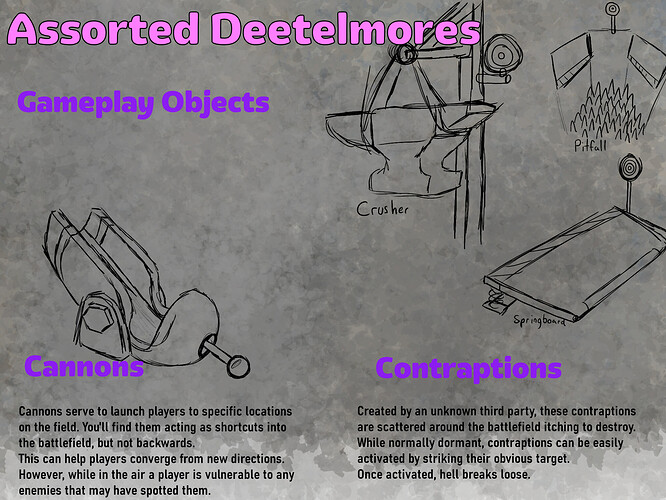 Scattered around maps are gameplay objects in order to spice up the battlefields themselves. Need to get to the other side of the map quickly or pass by and enemy bottleneck? Use the cannons to soar where you’re needed! Pesky enemies converging near you? Unleash a contraption on them!
Use the environment to your advantage for a swift and/or deadly victory.

Maps
One map is simply not enough for a Game World such as this. Here are some suggestions beyond the Two-Fort map.

Great job on the artwork and going into detail of each suggestion in general. I am quite fond of the whole classes idea, I really like that approach. Excited to see the suggestions that others have within this topic.

I really love the idea of the classes and having little traps around the levels, I think that’d help a lot to add a lot more strategy to the game than just running to grab orbs and going back to your base. Also to add onto the maps section, I think maps set in a UFO and a space station would be fitting, and could probably have a couple of interesting unique traps to match the settings too.

There’s also the often repeated idea of spicing the gameplay up by way of random power-ups, the more diverse, the better. I will even add the idea of shootable power-downs: pick one up, then fire it at a player in the opposite team.

As for map suggestions…