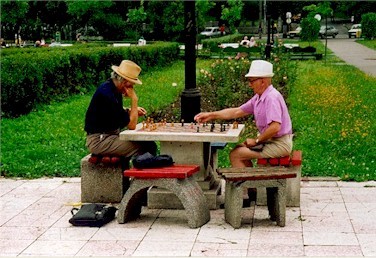 This is the only picture I could find to depict my idea. But we younger crowd also like playing these games. I think it would be a great idea to place chess/checkers/dominos bench games in the plaza outside or near the beach!

Don’t Forget To Vote It Up If You Like The Idea!

In GMT, you were able to play Tic Tac Toe in the gameworld ports, (so you can play while you wait) it was simple yet fun, I can see it coming back.

I know billiards (or pool) is coming, and air hockey is planned, but they will be in the arcade probably.

I immediately thought of this after seeing the image! Pixar is awesome.