For those of us with 1.5mbit connections (or less), getting canvases to load can take a really long time, and eat the entire bandwidth, causing other programs to lose connection. Having to load them from the web every time you enter your own, or a friend’s condo can be brutal, and sometimes they don’t load at all. (Even in the same TU session, they don’t seem to stay cached in memory after you leave your condo to say… go to a plaza or play a minigame.)

Also, I can’t imagine many image hosts appreciate being slammed with large volumes of concurrent traffic all the time.

I’m suggesting that Tower Unite caches canvas images to a “canvas_cache” folder, perhaps each file being named as the MD5 of the URL. By default, it would only cache canvases by yourself and your friends, due to concerns about certain content ending up on their drives.

Why not, but the files into the cache should last about 1 or 2 weeks before being automatically deleted.

2 weeks? you could call that a fortnight

Also when you consider that some sites might go down for maintenance or remove certain pictures from their server, it would be nice to have said cache because then you would also be able to reupload the picture to some other site.

Although i really wanna know, how is your network only able to handle the same amount of data as an ADSL from the 90’s?

remove certain pictures from their server

Or better yet, replace everything with cat pictures so everyone knows you hotlinked the files. Seriously, what’s so hard about uploading the files you use to imgur from the beginning?

For me? maybe the fact that the total amount of times i have used custom textures is 2 times, and said times were spaces so far apart that downloading the picture and then uploading it to imgur or photobucket would be a downright obtuse amount of work when i could just take the already existing link to the page where i found it and be done, plus i only needed said custom textures for like 10 seconds at worst.

As for Striker and other people with his kind of internet speed? that is obvious if you had read what he said, which is that he has a bandwidth that can download up to 187,5 kilobytes a second, which is roughly what you would get with a DSL from 1998.

If the cached images stayed around longer, there’d have to be some kind of check for a change to the image every time you load it, otherwise somebody would change the images, but you’d be seeing the old ones, which could cause confusion. I guess a check for the same images might be a tad bit quicker than downloading the image every time.

Although i really wanna know, how is your network only able to handle the same amount of data as an ADSL from the 90’s?

How? Seaside Wireless. A shitty company, and the only one available in this rural shithole, basically. This is Nova Scotia’s excuse for “100% ‘broadband’ coverage”, that only existed as recently as 2010. Prior to them, only dialup in this neighborhood.

I guess a check for the same images might be a tad bit quicker than downloading the image every time.

It would be if it did an HTTP HEAD request for the file and got the file created and/or modification date. (Or maybe Content-MD5 response? Hard to say.)

bandwidth that can download up to 187,5 kilobytes a second 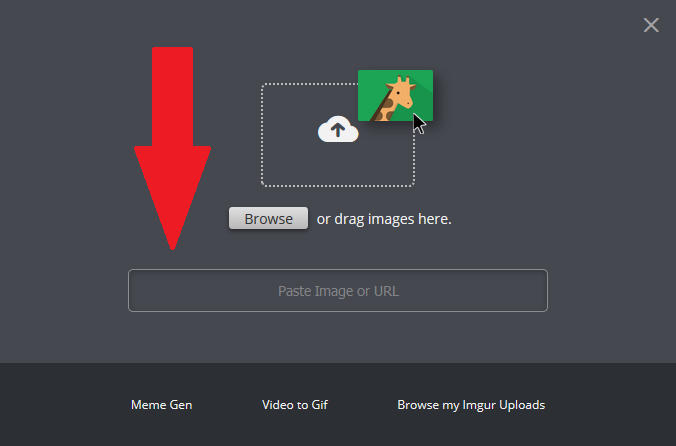 Useless response, no offense. Uploading to imgur doesn’t magically make your bandwidth greater (in fact, that’s what I upload to anyway). The problem is with the ISP, not the domain uploaded to. Seaside Wireless only has a 187.5kb/s download speed.

*insert johannes response *
You do understand that you will still have to download the pictures from imgur whenever the canvas refers to said picture.
The problem is still that strikers ISP only provides him with a connection that can download 187,5 kilobytes a second, uploading the image to imgur mean he would still have to download the picture when he joins a condo with said picture.

Oh ya also in the future i’d recommend reading what the other people have said so you don’t end up saying redundant information over and over, it saves you alot of time and sanity.

But uploading from URL (as pointed out with the big red arrow) doesn’t make you have to upload it with your own speed and with ADSL, uploads are in my experience the greater pain. Also I’m not arguing against on-disk caching, just against using hosts with questionable relliability as a reason for caching. The problem in that scenario is not the hoster, the problem is you hotlinking.

As for lower bandwidths in general, this is why I honestly don’t understand people using canvases for whole condos and was worried about the introduction of the playermodel workshop: People like you are practically fucked.

@Heavysteam Thanks for the tip, your post contains the third time in this thread the converted bandwith has been mentioned.

You don’t upload from a URL, you download. Uploading is sending from your network. When you put an image on imgur from a URL, the process is as follows:

Here’s the hitch, you’re still DOWNLOADING at your restrictive speed. It doesn’t help barely at all. Uploading an image to imgur is hardly the issue here.

@JohannesDau Not trying to be rude, but please, actually know what you’re talking about before writing a post.

I’m not hotlinking. Where do you get the idea that I’m hotlinking? I didn’t mention hotlinking, didn’t say anything to suggest or imply it either.

Also, what Plokit said. I was basically going to write what he did but he beat me to it.

Until I saw you were replying to JohannesDau, I was like

@Plokit Yeah, sorry. I can be a bit awkward with phrasing.

If you highlight people’s replies, you’ll see a little “quote” button pop up. I like to use that if I’m not replying to the most recent reply on the topic.

If you all could turn down the “You don’t know what you’re talking about” dial that’d be nice. If I read something that makes me learn something new I do realize myself that I’ve been wrong.

You don’t upload from a URL, you download. Uploading is sending from your network.

URLs are just the location of the resource, upload and download depend on the context. What I mean is:

Uploading an image to imgur is hardly the issue here.

I do indeed regret having chosen to drop my little comment about that in this thread, seeing how far that escalated so far.

I’m not hotlinking. Where do you get the idea that I’m hotlinking?

In the hypothetical case of you not reuploading used images to a hoster like imgur, you likely are. This hypothetical case was the context I originally posted in. @Heavysteam then mentioned how it’s actually work to upload files, especially with low bandwidth.

Also I wonder if the workshop playermodel cache system can be used for canvas caching, I imagine there’s a chance it’s practically the same code as it’s a similar kind of task but I don’t know the implementation.

Incorrect. Imgur is actually downloading that image from your linked URL. You upload from a client, and download from a host (most URL’s being hosts).

(I work in IT so I get a bit technical with the wording. Gets my OCD going)

then uploads it to the hosting section of their website.

Did I say anything different? From the client side (imgur servers here) it’s a download so imgur downloads from the host but not you.