Right off the bat I’ll first ask that if anyone has a better name idea for this suggestion, please let me know! I’m struggling lol. I remember a social sim-type game (possibly Playstation Home I think?) had a feature similar to this ages ago, but I can’t remember the game or find examples of it so I’ll try my best to explain. Biiiiig post incoming!

In Tower Unite, servers are always hosted by the owner of the condo. This is of course something that will probably change with future support for co-op condos, dedicated servers, etc.

What I remember this other game having, and what I’d love to see in Tower Unite, is the ability to make your condo data publicly linked to your profile. If, by choice, you have this option turned on in your settings, it would display a button on your tab-menu profile, like so:

This button would allow another player to view your condo(s) in a singleplayer instance to see what you’ve made. This would eliminate the need for players to afk just to show off their creations, or have to drop what they’re doing and leave their game/lobby just to show a friend something in their condo. I’ve had friends tell me that so-and-so’s condos are awesome, and to just watch the condo list to hope for the off chance that they may host while you’re online.

I know very little of the way TU is coded, but I’d hope this could be done by simply importing the condo data file that’s downloaded whenever you join a public condo, and having the visiting player “host” it, while being given the same permissions of any normal visitor (no placing items/editing/etc). This could probably be further modified in settings to enable/disable certain things for visitors, and also select which condos are available to view publicly, like so: 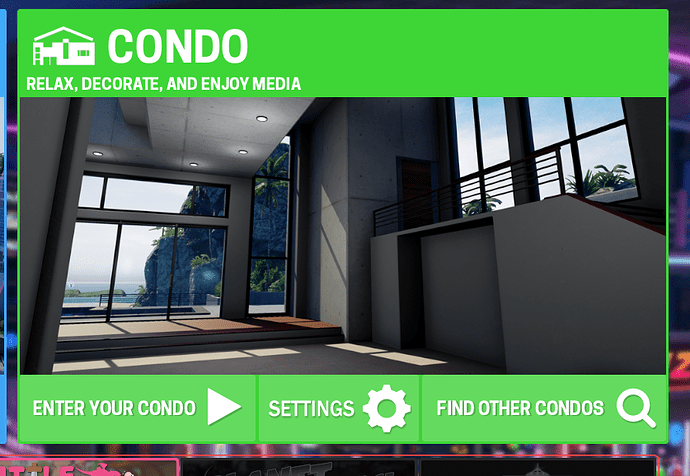 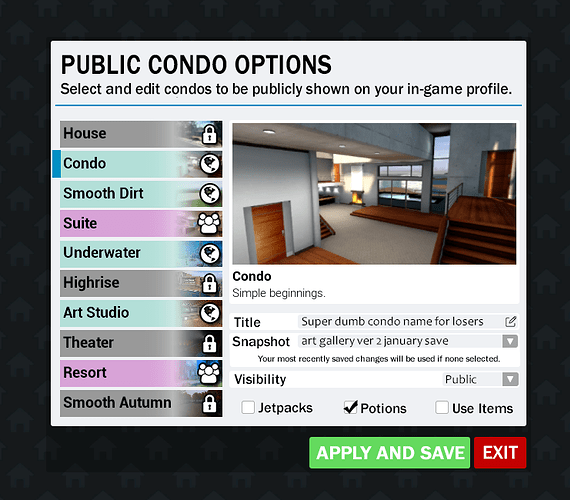 These mockups are just to give an idea of where stuff could go, I know the devs are much more creative and skilled at UI development than me lmao. Perhaps in the future there could also be a tab on the Condo’s list for offline/single instance condos, sortable by type, most viewed, upvoted, etc.

I only say singleplayer instance, or possibly friends-only, because the idea of a publicly hosted instance of another player’s condo sounds… odd. Dedicated condo servers, if implemented in the future, would be a great alternative to this, but not everyone has the time, knowledge, or money to buy/rent and set up a server.

I’m sure I’ve done a horrible job explaining this concept so I’ll give a quick example of practical use: I’m a digital artist, and I made my condo into a little art gallery! Since it’s just an art gallery though, I get kind of bored hosting it, and I mostly afk during it. During this time I can’t really go play mini-games or even do anything else on Steam. I have friends from different timezones that I can’t show my condo to unless I afk overnight and don’t crash.
Having this feature would mean that someone asking about my condo could simply visit it off of my tab-menu profile, instead of me having to drop everything to go host a server for ~10 minutes, and vice versa if a friend wanted to show me their condo.

I apologize for the extremely long post, I wasn’t quite sure how to word this concept so I hope it makes sense!

Edit: Quick clarification that this isn’t to replace the condo system! Being able to host a server for multiple people to join is still a super core system to the game and I love it. This is simply another way for players to view condos of people they’ve met or know!

I would absolutely love this, I’m quite curious what the ups and downs of this would be.

As long as the option to disable this is there I’d love this.

This is such a cool idea, I’d love to see this if it’s possible!

If it’s possible to do this, I’m all for it.

I love this idea! You got my vote!

Thank you guys so much for the positive responses!

I’m working on some mockups for offline condo listings, or I guess “builds” that can be listed, viewed, and voted on. I’ll update when I’m done! 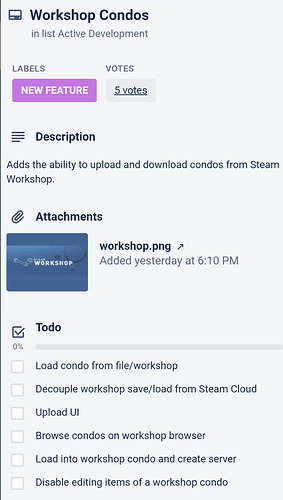 Genuinely wondering if this is on the same sort of line, or if it’s just for like custom condo maps. Or both I guess. Definitely going to watch the hell out of this trello card lol.