So, this may be kind of lame to you guys, especially for all you pro blender users and 3d modelers out there. but for me, this is AWESOME.

I have been watching video tutorials on blender for the past month, self training. After I finished the series, I was ready to go off on my own, move out of the videos, little did I know, how much of a stress ball my head would become. I spent the next week and a half, trying so hard, and so frustratingly, to get this right. After what felt like ages of working, I hit f12 to render it for about the 100th time. My heart skipped a beat, I felt A LOT of adrenaline. I felt SO happy, it literally felt like I was out of breath, I was light headed. Now, this may seem lame, especially when you see my crappy little rendered image. But for me, this is a BIG deal, I spent SO long, messing up SO many times. Spending time figuring out what was fucked for SO much time. I learned A LOT when doing this! I guess you really do learn from your mistakes, anyways, here’s the picture. 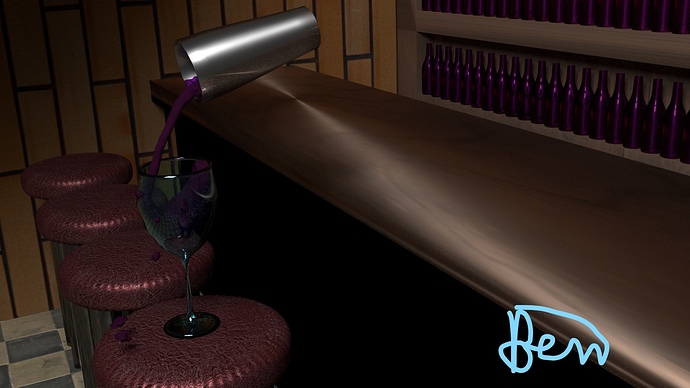 Did you model everything yourself, or just set up the scene? Either way, it looks rather nice! Good job!

I modeled everything myself.

Good job this makes me want to try blender.

That’s pretty neat. I’ve actually been wanting to get into blender myself for awhile now. How hard is it to use? Also, if I have to art experience at all, is that gonna be a problem?

That is really good, I do blender myself, so i can see the talent that has been put into this