My computer... Is here

Not to long ago, I made an off topic thread with a pole asking, should I become a PC gamer, or stay a console gamer, and 3 days in, there were 25 votes for pc, and 0 for console. I then set out on a massive money saving spree, I had saved for and purchased about half of the parts for the PC, and on Christmas it was topped off. I can’t even begin to explain how happy I am, I this is the kind of thing I have been wanting for years. And, I have finally got it… 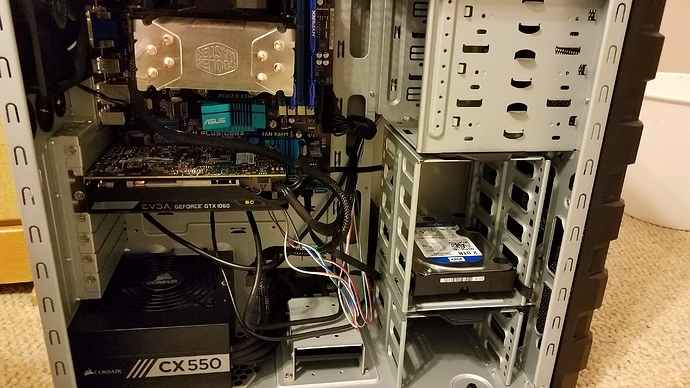 But, I am in a situation… now that I have the power to do anything I want in games with no lag, I don’t know what to do with said power… I played fallout 4 at maxed, which was pretty cool I guess, I don’t want to even purchase something like GTA5, as i’m not one who wants to be forced/tempted with the nudity and many other things… WHAT CAN I DO!?

(P.S. Yes, I can now run TU on all ultra and none potato settings)

(P.S.S. I get that my cable management is a hell hole, it’s my first ever PC that I have built, gimme a break.)

Congrats! That’s not a bad system at all.

The 10-series Nvidia cards are such a good mix of affordability and power, too. You should be set to run most games these days on high-ultra graphics no problem.

I think that a bunch of us would like to know the specs of our new inductee to the PC Master Race. However, given what I see in this photo, then this system will prove to be mostly solid for 1080p gaming at Ultra settings! Regardless, Welcome to the PC Master Race from a fellow Longtime PC user! May your framerates be high, and your temperatures low!

Oh ya, kinda forgot about that. Lol,

Taking a look at these specs, most of the choices you’ve made aren’t bad. However, in my opinion, I don’t think you made the best choice of choosing the AMD FX-6300 as your CPU.

Well, when you can, I’d say one of your first upgrades should be replacing the motherboard and CPU (and because more modern motherboards use DDR4 instead of DDR3 memory, your RAM as well) with a more modern CPU and a motherboard with a CPU socket that still is supported today (as the socket on your motherboard, the AM3+ socket, is no longer supported due to the release of AMD Ryzen series processors that support the AM4 socket).