So I know a few others have reported this issue but it’s really annoying and I wanted to try figure this out, or add something to it, because I have been making a model and kept it well under 30k vertices, it’s sitting at 10k verts and 19k triangles, yet TU reports it to be over 50k which I simply can’t decimate or reduce it enough to get it looking as it should.

So I brought it down to basics, imported a simple cube and there is something wrong or I am missing something. The basic cube of course has 8 verts, 6 faces and therefore 12 triangles, as here; 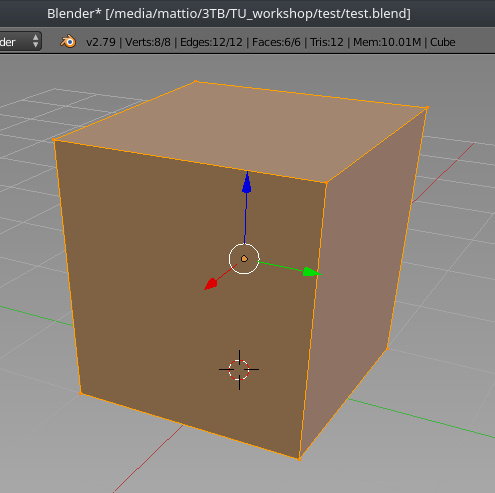 However TU reports it as having 24 vertices, double the number of triangles and triple the actual vertices, as far as I can tell nothing is wrong with it. This is the most basic cube and it’s showing up incorrectly. I’ve tried this with spheres and cylinders etc. all of which report more vertices than it should have. 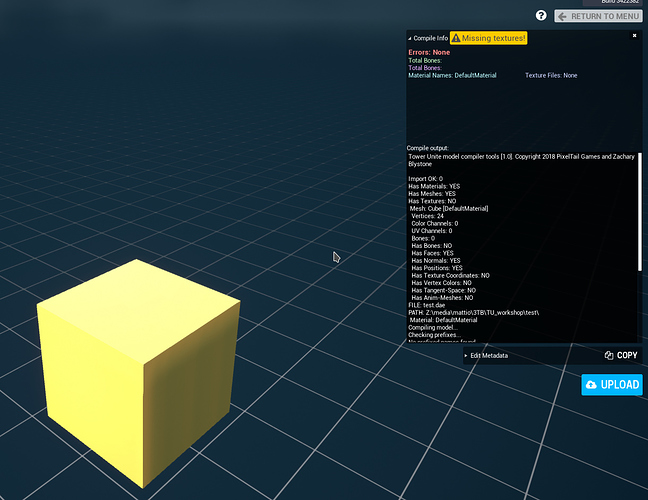 So I am wondering if the developers would be able to figure out why even a simple cube is showing up wrong, it might solve the root of the problem, or at the very least give us understanding why it’s doing it.

I’ve had a bunch of models with under 30K verts that showed up with thousands more verts in TU than they actually had. It’s really annoying.

Yeah I noticed, I really want it to be fixed so I’ve been playing around importing basic shapes and everything is showing up wrong. Every objects shows up as double or more of the triangles that blender shows.
Right now the basic sphere in blender is: Verts:482 Faces:512 Tris:960, TU shows up as 1984.
I’ve tried adding them all and dividing things trying to find a logical pattern between blenders numbers and towers but nothing solid, so I really hope that if simple shapes are wrong then there’s a simple way for the developers to find out.

I can explain it.

In Blender, or any other 3d modelling software, multiple faces can share vertices. Let’s say you have 2 faces; you only need 4 vertices to make this quad, assuming you are using triangles.

However, once the model is exported, the model format cannot share vertices, so they are duplicated to make every face that’s normally attached them

This 2-sided model would claim to have 6 vertices instead of 4 since two vertices are shared. It’s a limitation of the file formats being used and it’s actually very common. 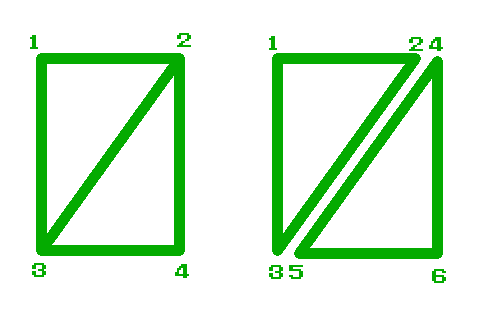 Interesting, thanks for this.
So I’m guessing there’s no way to reduce this? For example me having my 10k vert, 19k tris model that TU is reporting to have 58k, is there nothing I can do?
It also makes it hard to determine when you’re going over the imported limit without continually importing into Tower Unite to see what it says : /

Only thing I can think of to fix this would be for TU’s importer to check for vertices that are in the same location and re-merge them on import.

So I found something which might help, my model originally was showing up as 58k verts, I’ve managed to get it to show up as 31k verts by disabling triangulation on exporting, as .dae. Though I don’t know how this affects anything yet but it looks normal so far.
So with a tiny bit of decimation I got my model to squeeze in, without textures and things yet but at least I can import it. 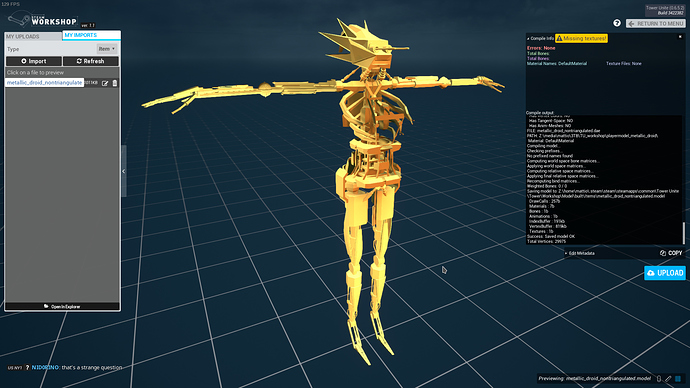 If the developers can’t do anything about this vertex thing, it might be better to limit models based on triangles since that shouldn’t have this effect. Though I don’t know the low level implications of that kind of change.

Yeah, using quads instead of triangles should reduce the number of shared vertexes since instead of having two 3 sided faces share two vertexes you’d have one 4 sided face with none shared

Short Answer/solution:
Turn smooth shading on for your object/objects.
With your objects selected simply right click and and apply “shade smooth”.

Why this works:
To negate smoothing on objects that are flat shaded, UE4 will split the mesh along smoothing angles to keep the shading flat, thus increasing your overall vertex count.

Just to clear up some incorrect info:
As far as the most common 3d file formats go (such as OBJ,DAE and FBX), mesh faces can in fact share the same vertices and are stored as such. Triangulation wont have any effect on the vertex count either.

In attempting to upload a model for the first time months later, my above solution seems to no longer work entirely. Although smooth shading does tend help “reduce” the number verts said in TU, it still also seems to always be more than what is said in blender.

Currently the only way I’ve been able to upload a model with the exact number of verts as said in blender is to remove the UV map entirely… but that is not really a solution in most cases.