Now, for a while I have been enjoying Tower Unite yet there has been some things bugging me, which is the repepetition of minigames such as golf or ball race, both some quite fun games (and the only ones played right now), but their lack of maps is quite frustrating and is very discouraging.
Perhaps some ranshackle level designer for minigames could be created but just for ball race and minigolf. Whenever someone designs a level it’d be uploaded to a test branch of minigolf and ball race for people to test and rate so if it was rated high enough it could be considered to be added to the main game.
I’d love to see some form of response from anyone!

Luckily these have already been suggested a few times so the devs a probably already working on this, or they might soon.

About the Suggestions category Post suggestions & feedback on ways we can improve Tower Unite! Input is always welcome here. Make sure your suggestion hasn’t been suggested in the forums already by searching topics before you post. ONE IDEA, ONE TOPIC DO NOT HAVE MULTIPLE SUGGESTIONS IN A SINGLE TOPIC. MAKE MULTIPLE TOPICS. IF YOU HAVE MULTIPLE SUGGESTIONS IN A SINGLE TOPIC, WE WILL IGNORE IT Please check other threads in the Suggestions forum before suggesting something. All suggestions ar…

The remote-controlled boats and cars reminded me a lot of this: We should be able to make our own custom 3D race tracks (with loops and stuff too) in our suites to race our friends in. And perhaps if we get the expanded ocean, we can create our own boat races too?

As we know, Tower Unite is getting Steam Workshop support. You can share condos with other players, but what if they added custom mini golf hole pieces? We could build our own Mini Golf holes and share them with the world on the Steam Workshop. I was also thinking about custom roller coaster tracks but I think that would be too hard for the developers. But I hope this does get some traction and someone will see it. 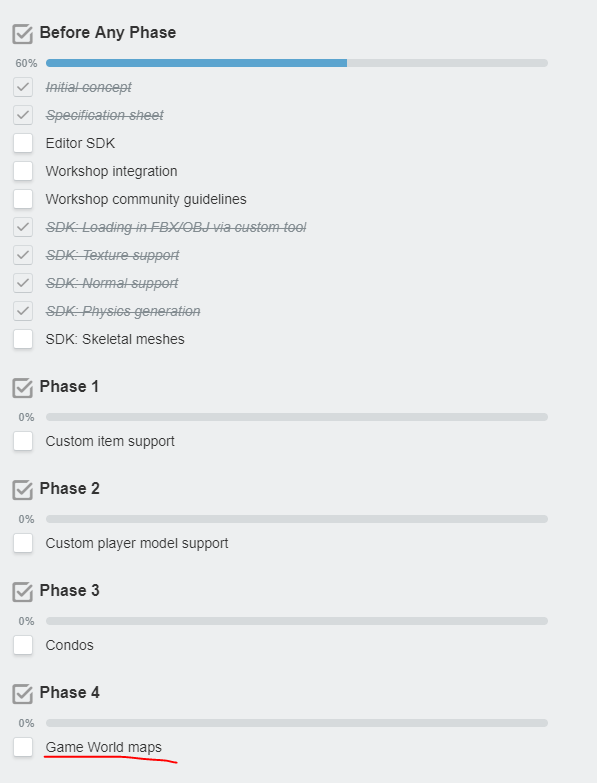 Im well aware of that,
I sadly doubt the devs would create a fully fledged map creator with snapping functions, map pieces and the ability to specifiy map rules before they have even completed the workshop integration and editor.

Luckily the game engine already has its own editor that he could use to create minigolf courses that he could send in to the devs and ask he if they would be so kind as to consider if they should add them.

Im well aware of that,

so why did you bother at all?

Well i forgot to mention to him that he could use the unreal editor to make minigolf/ball race maps that he could send in to the devs for now.

One thing is for certain, we will not be using Unreal 4 Editor to develop custom maps. So don’t start making maps in Unreal 4’s editor - it won’t be compatible.

Custom map support will have to be done within our game using a combination of our own tools.