Hey everyone, this is a a thread for all bugs related to Minigolf: Treasure Cove.


Hole 4 HIO pipe can have too much power


Hole 16 Barrels from the second crab are sporadic.

This is fixed in the upcoming update.

Not sure if the above is related to the problem I have just had. (Third time now)

It is possible to desync from all animated objects so that, for example, chests are open when they look closed, moving blocks appear out of the way when they are directly in the ball’s path, and visa versa so you can go straight through obstacles.

Hole 7 in Treasure cove and hole 17 - with that moving hole show this most often. In hole 17 you have no idea where the hole is and can ‘ride’ around where it looks likes it is. Tried to get a pic but was not quick enough - sorry.

Mind the edge in Alpine has the same issues Only here you tend to go through the moving block by the hole. Could be a ping issue? Mine was 66 when this happened.

This is a fairly new issue, and I have not had it prior to the last patch, now its a regular problem.

I had a rather significant issue in Hole 8. I landed in the first cannon-hole that fires you off, and my ball just sat there. It didn’t allow me to putt, but it never fired off either. It shifted around a couple times - I saw the glasses on my ball rotate a bit, but it never settled. 20201101125622_1|690x388

Hole 8 bug - players in our current game went out of the cannon and got stuck in the hole.

Hole 11 - Flying out of the first big cannon everyone is stuck and the camera goes absolutely nuts.

Genuinely what is going on with golf, it has so many bugs right now it’s pretty much unplayable

the desync is horrific too.

On Treasure Cove, the rock right behind the hole doesn’t have hitbox on either hole 11 or 12 and it can mess up important shots. 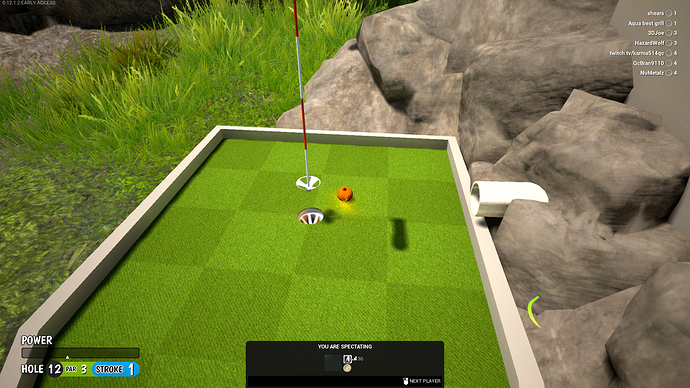 It is no longer possible to HIO Treasure Cove Hole 1 due to background changes from recent updates.

The new minigolf change a few updates back broke almost all of my minigolf shots that I spent so so so much time trying to gather and find out. I’ve always been quite a competitive minigolf player, as I have some world records. Ever since this change, I’ve pretty much quit minigolf and lost all my motivation to play it cause I am really not willing to go through the pain of finding all new tricks and spots all over again. So yeah, the first hole of Treasure Cove is not the only hole. 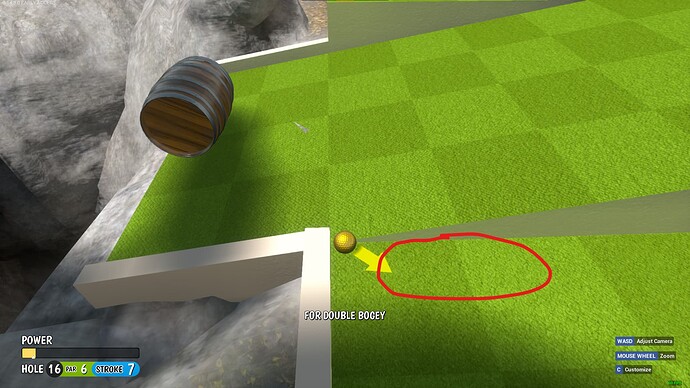 Hole 16 - the red area is considered out of bounds when the ball lands in it.

Not sure if this is intentional but there is a giant moon in the sky: