Hey everyone, this is a a thread for all bugs related to Condo - Underwater.

When someone uses an elevator going up to the surface, the person inside clips through the elevator right as the elevator slows down to a stop, and gets stuck at the bottom of the shaft. This is the case for all five elevators in the map.

I have witnessed it with multiple people, each using different player models. and without potions.

The windows have an overlapping stereoscopic look, not sure if this is a bug or a design choice 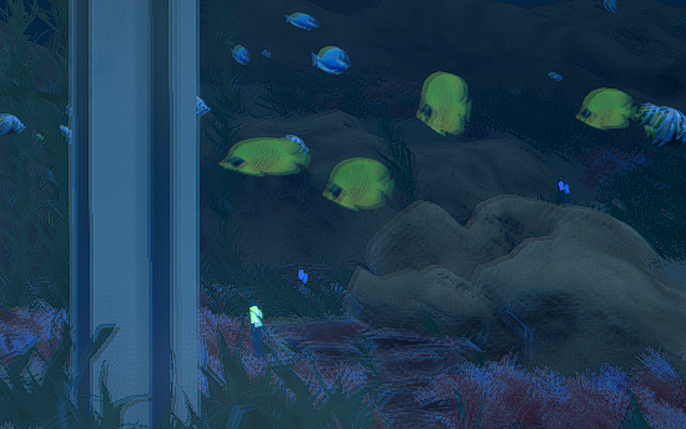 The lighting seems to be messed up in some way, not exactly sure how to explain it. The whole condo just looks generally worse than it used to.

Underwater in dev stream:
(condo used to look like this in-game as well) 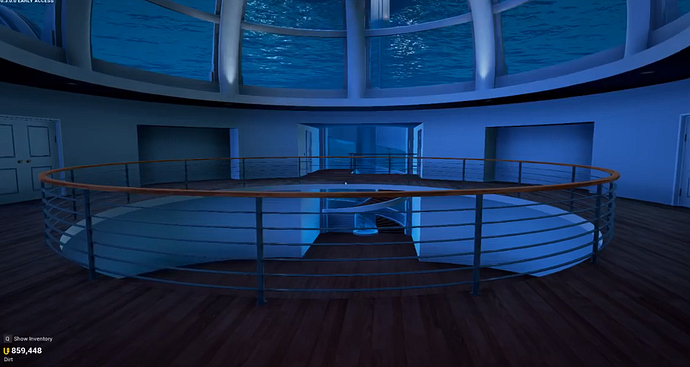 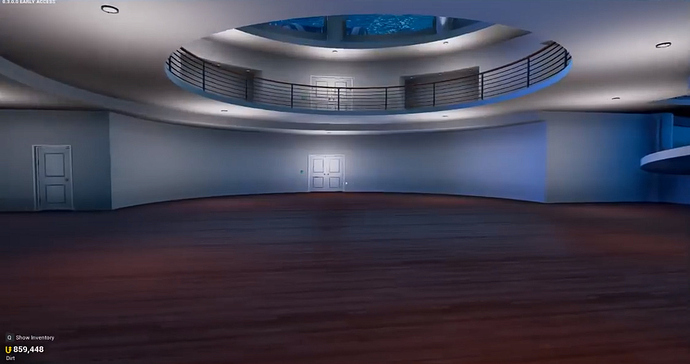 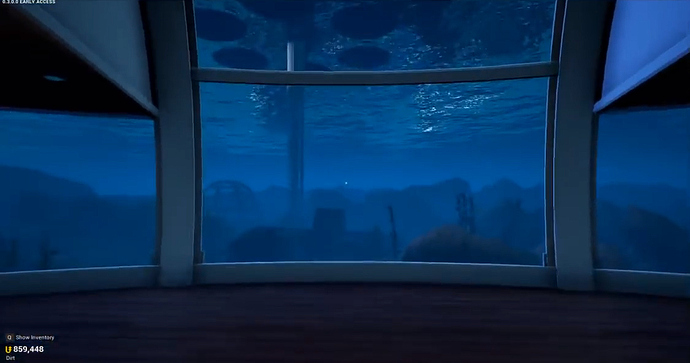 Underwater now:
(graphics settings are all on high, time of day is set to night) 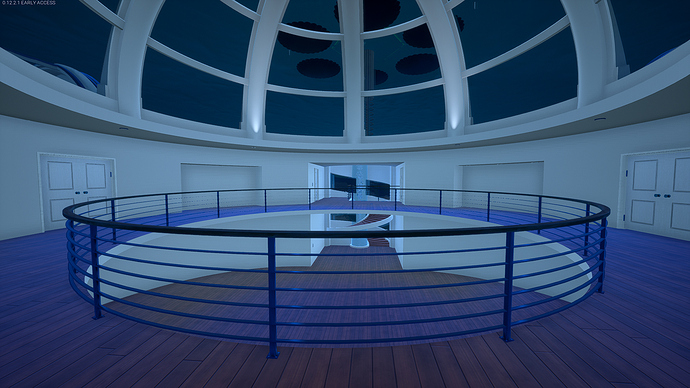 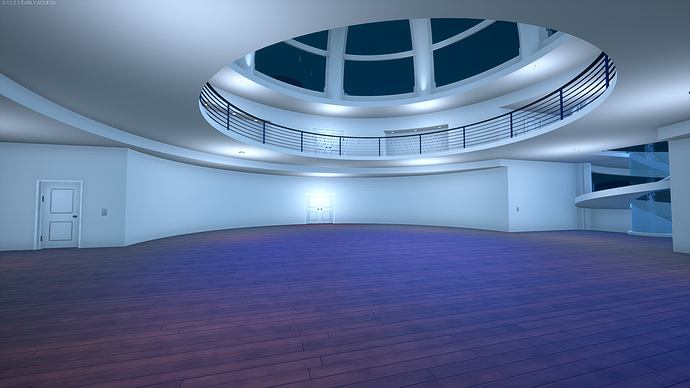 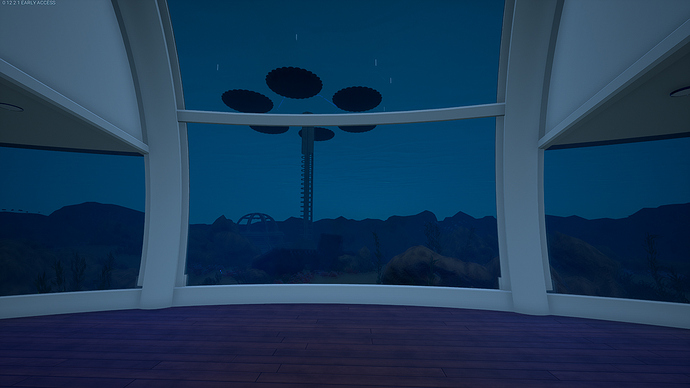 Everything seems to be unnaturally bright for some reason, including outside the windows.

Yeah the lighting looks awkward & it almost kills the vibe. Im sure they will fix that in a later update.

There’s a few surfaces in the condo that can’t be edited, which kinda bothers me since I’m going for a darker red/black color pallette for my condo, and I’d preferably want to not have too much white in it.

Here are the ones I’ve noticed so far (I was hovering my mouse over each surface in the condos but I guess steam doesn’t capture the cursor for screenshots):

Skylight (can’t edit in all condos)

Elevator door wall indent (all indents in each condo)

Doors (every door in each condo)

Exterior walls (each wall on every condo)

Basement teleport tube base (each tube in the basement)

Basement straight support beam (all 4 of them)

Basement pool stairs (all 2 of them)

Basement window base thing (only this one specifically)

Tube skylight (all ceilings above tubes)

Also a quick addition to this reply, the views out the windows look especially weirdly bright during the day time:

The water volume in this Map acts super strange. For starters it’s super difficult to get fish into it (not sure if that’s intentional) but also in certain parts of all the condos (mainly at the windows) it acts like the player is underwater. Not sure if it’s going to be refined or not so I’m posting it here. (I’m not at my computer at the moment so I can’t take any screen shots)

If I had to guess, Underwater is next on the refinement chopping block after they’re finished with Highrise. The Condo’s slowly degraded with time (especially in atmosphere and lighting) and with Co-op Building added, it can serve its original intended purpose.
The Water Volume was built before the aquarium system was made and (last I checked) isn’t compatible with fish. I think the problem with the volume being inside is it getting slowly knocked out of its original position / slightly scaled through updates.

Underwater is currently the hardest Condo to build in (maybe tied with pre-refinement Highrise) and is in need of some major adjustments.

Am completely unable to put fish anywhere in the underwater. If you place them in the pools or outside they just flop around. I have tried them in another condo and they work fine. They just wont work anywhere in Underwater. 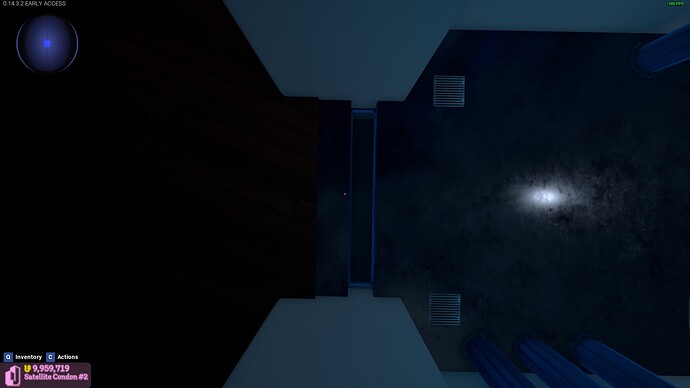 As far as I can tell this doesn’t happen in the other Condos.

In Satellite Condo #4 there is a light above the spiral staircase that is always emissive, even when off. As far as I can tell this is the only light that does this on the map. 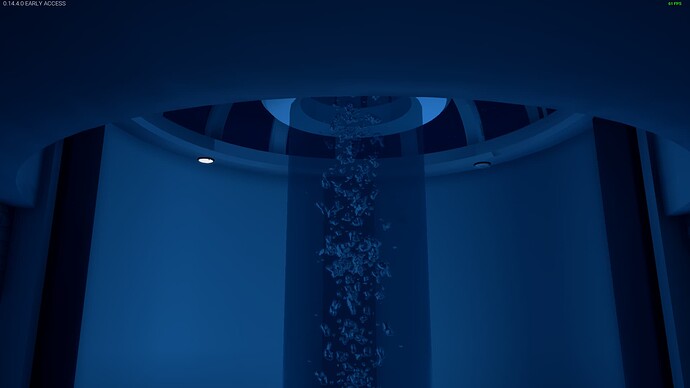 Throughout several of the satellite condos there are gaps between the window frames and the supporting beams/walls around them. There’s a pretty large gap in one of the windows in the Central Condo. 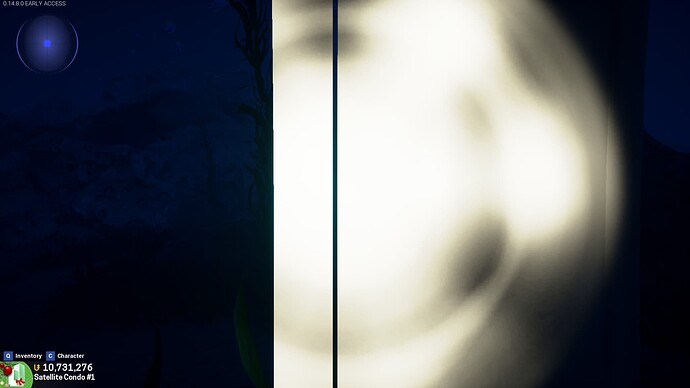 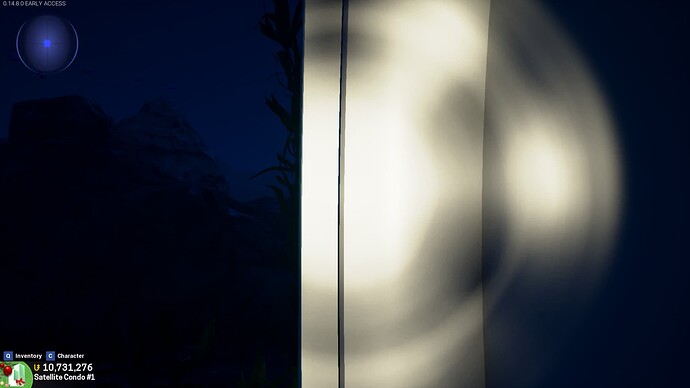 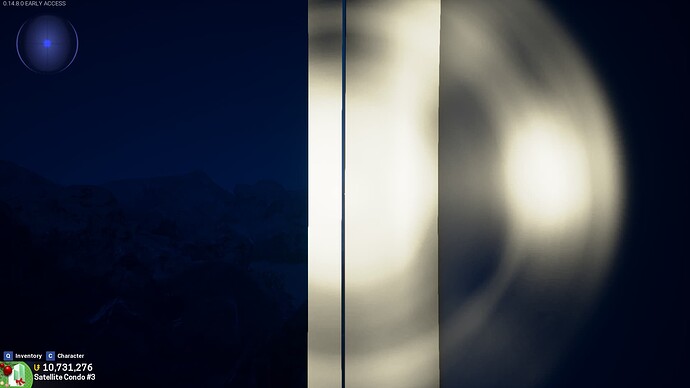 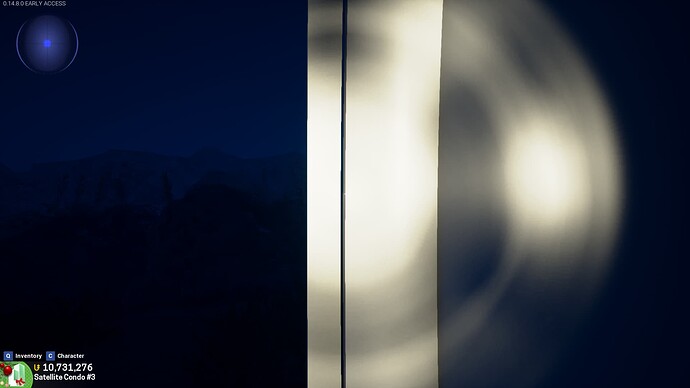 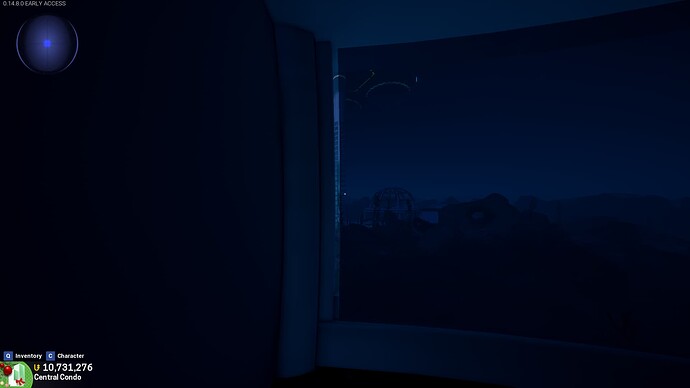 In Satellite Condo #1’s room that’s connected to the air lock a piece of seaweed can clip through the glass. 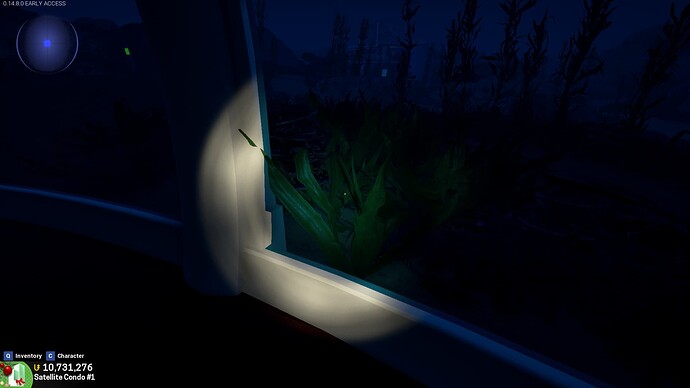 For some reason, any Statues or PNG Cutouts get overlapped with the water when viewed through a window. 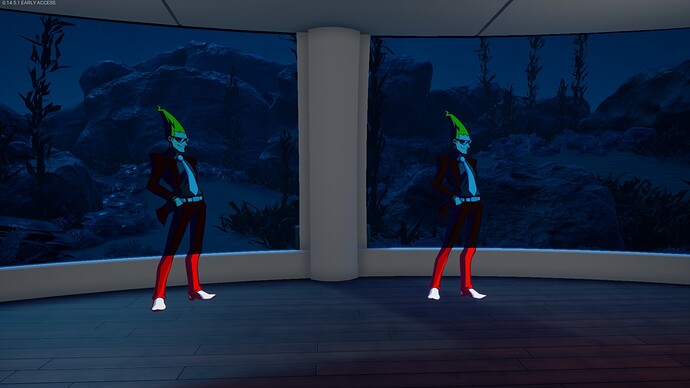 This doesn’t happen when it’s only above the water’s surface.

This is a technical issue with how UE4 renders transparent materials.
Though maybe a workaround could be adding an Opacity Mask option to Statues (Opacity Mask renders differently from Transparency in UE4).

When you place physics-based items inside the buildings, they all float up to the ceiling as if they were underwater.

Hello.
I’ve found a light bug, which really hinders the gameplay on my Underwater-Condo.

Despite being able to edit this floor surface, the Floor 2 Central Condo “Balcony” Ring never seems to visually change from the default wood. Both of the floor surfaces you can see are set to the same canvas, but the middle ring doesn’t change surface textures.
The satellite condo “balcony rings” don’t have this issue, their surface works fine when edited. It just seems to be the Central Condo. 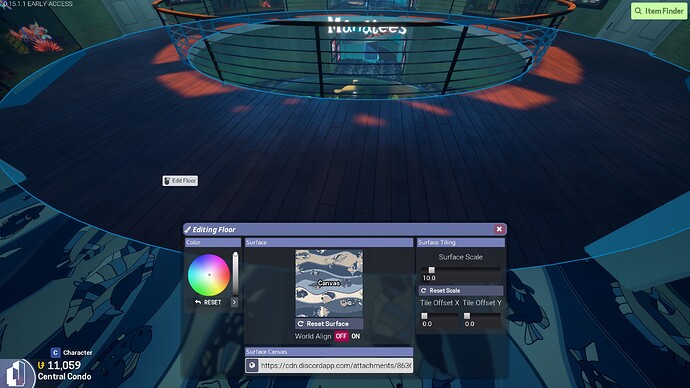 This will be fixed in the Casino Phase 2 update.

Unsure if this happens on other maps, but I noticed it on Underwater–

it seems like, at least on these platforms because I didn’t check anywhere else, the custom color you set doesn’t network unless you changed it while the person was there.

The left side is from a guest, the right is the host–both on max graphics settings. After setting the color to something else and then resetting it to white, it looked fine. Pay attention to the canvas piles color compared to the platforms surface. 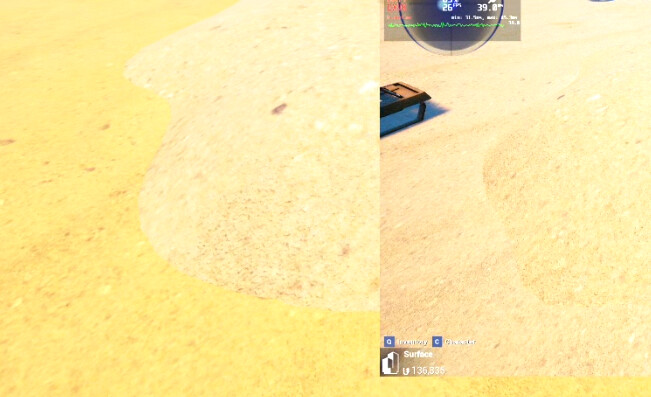 After changing it and resetting it: 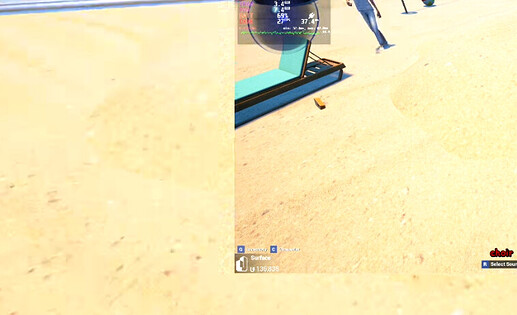 Da underwater with no water

where it at doe? First pic from the beta, second one is actual release–I don’t think the update had anything to do with it, not sure if it’s an item-count related thing. Will post the CondoData file at a later time. It seems like if I’m in there long enough it’ll come back eventually. This also happens when I join it as a guest on my Deck. 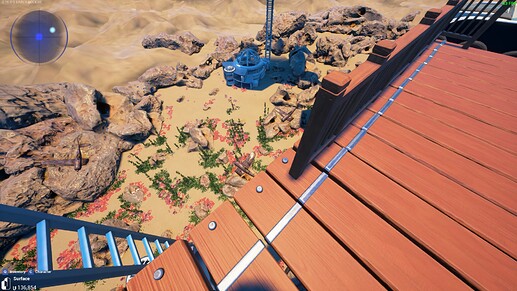 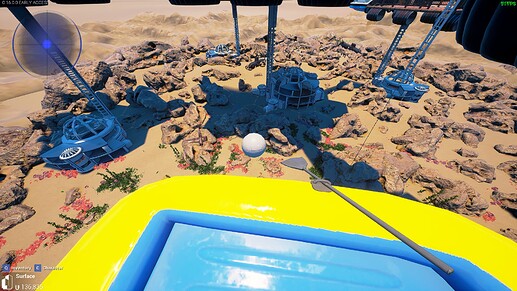 I’m super stoked the second floor ring surface glitch was fixed; however, I went through and found a few more areas experiencing the same issue, all in the main house.

This one is one of the backwalls hugging the glass behind the stairs around the transport tube, right against the second floor 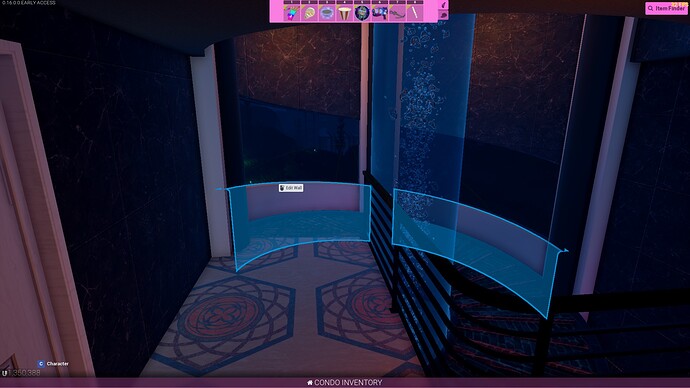 And these 2 are both the ceilings in the main room, these shots were taken from the ground floor in the center area. 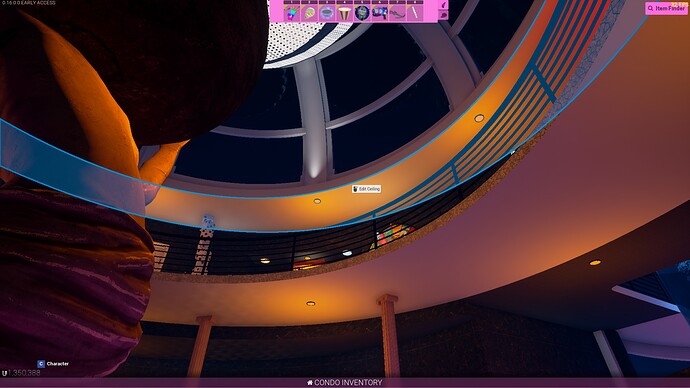 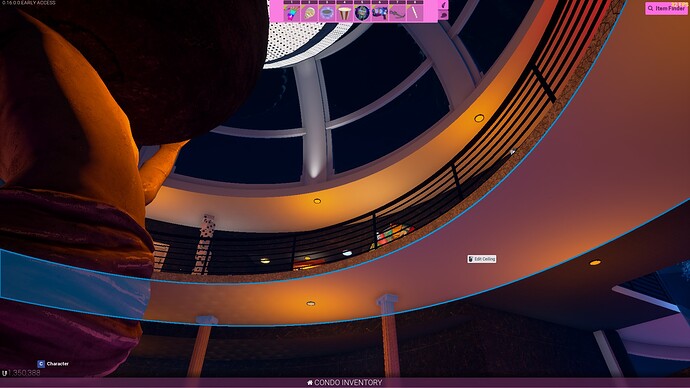 They were changed to different surfaces but remain as the default plaster.