I know there are so many other things that need to be worked on before this, but it would be really nice to have the coaster act as a diorama or even be rideable. Considering you need to get 800,000 plaza XP (which is extremely hard to get) to get this and it isn’t even marked unfinished it seems kind of unfair that it’s just a simple roller coaster model that looks as if it would be the exact same if someone was to just upload a similar model to the workshop. Some sort of ‘press E to animate’ thing could come up when looking at the coaster and the cart could ride through the track once, and again maybe you could even get in the seat. Just a thought for in the future when the important stuff is out of the way. What do you guys think?

as far as i know, mac said he tried to but couldn’t animate it at the time. i can’t for the life of me find where he said this though 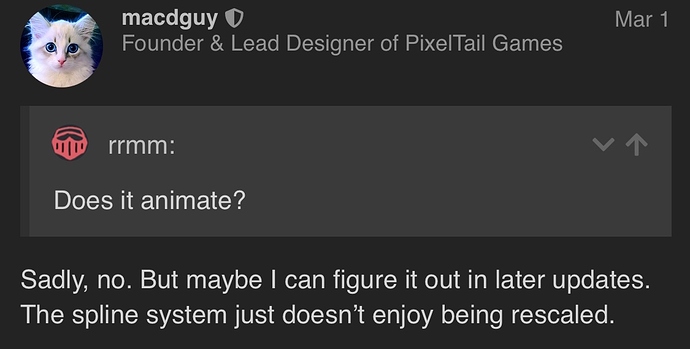