So–recycling this thread since the other one that was listed here ended today, and this is similar enough–Humble Bundle has a sale going on for a bundle of 123 items if you pay $40 or more. Like with the other bundle that was in this post, they’re not all games, some are assets, comics, and licenses to software. It costs more than the other one and has less content overall, but the content here is probably a bit more dense. It has things like Kerbal Space Program, Satisfactory, Starbound, Back 4 Blood, the Spyro trilogy, SUPERHOT, and Supraland, which is some game where you’re really tiny that I played the demo for a while back and thought was neat. It ends on March 25th, 2022.

Unlike the itch.io bundle, most of the games in this one can be redeemed on Steam (as far as I could tell from clicking through them). idk how the non-game stuff in handled.

Support vital humanitarian crisis relief for the people of Ukraine with an all-to-charity bundle featuring games, books, and software.

And if you have a preference, you can adjust how much of the money you pay goes to which organization/group. You can do this by choosing “Adjust Donation” under the checkout button. By default it is set to an equal 25/25/25/25 split. 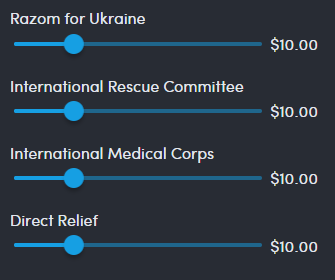