I know back on the GMod Tower days a lot of you didn’t care at all about the arcade machines
But i did it was a nice way to spend some time when i had nothing to do on the lobby and i missed it a bit, So i decided to remake the arcade machines in 1 and half day i ate very little and drink almost nothing just so i can finish it as fast as possible i was very happy, I am pretty happy with the final results of course its not exact same with GMod Tower’s arcade machines but its very accurate i made new GUI and the window is the size of the game so it doesn’t take the whole screen and its draggable, The addon have 28 arcade machines which only 2 games are not working just because the games got removed from the internet and i couldn’t find them those games are BallRacer and Hover Kart from OMGPOP, OMGPOP was the name before the company called Zynga but they sold out to them, Some of the games aren’t from the same sites that GMod Tower and thats simply because i can’t know from what website they used the games, And of course Mac knows about it, Credit goes to PixelTail Games for the models and textures and the basic idea, Me for the code and all the developers from all those flash games here is a list with all the games i put

Also i found on the files 7 retro machines but i could make work only the first one simply because the skin feature on lua didn’t seem to work i imagine that they didn’t finish working with those arcade machines i might try to put them in the future.
On the addon page i have instructions on how to save arcade machines on a map with a gamemode that is not sandbox

I really have to thank Mac for letting me do this addon it was very interesting to me and i love every part about it, I learned a lot of lua because of this project and i started learning lua just because i saw how nice is the feeling of finishing a project especially a mod for one of your favorite games i really enjoyed it and this motivated me to become a modder i don’t promise anything ultra cool but i might come up with something nice .
if you read so far thank you very much for your patience i usually don’t talk that much.

And finally here is the addon link: http://steamcommunity.com/sharedfiles/filedetails/?id=752449957

Feel free to add me on steam if you wanna play something together one day or just to talk
http://steamcommunity.com/id/TheWalkingToastGR/

Wow, fantastic job on getting these back into functioning again. They look great, and I’ve missed them dearly. Just curious though, did the PixelTail Games team allow you to use these?

And of course Mac knows about it 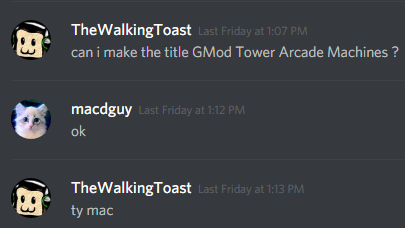 I’d be interested in seeing a recreated by Pixeltailgames Doom game, maybe called Ruin or something? (Synonymous to Doom) idk.