Explaining double or nothing

Ok so I was playing double or nothing and I noticed that it wasn’t actually a 50% chance to double, but felt like it was a bit more in the players favor, so I made a tally of when I get a double and when I get nothing and here is what I got after 1200 tries:

It calculates to a 59% chance that a player doubles and 41% that a player gets nothing, so it’s likely that the devs decided on a 60% chance that you would double. Now what would be the strategy to earn the most amount of money in this case? Here is a formula I wrote that would express the net gain:

We already estimated p=0.6 and let u and n = 1 to simplify the equation you get:

From this you can see that the more you double per attempt, the higher the gain, so it is always in your advantage to double.

I attached a picture of table showing how much you would have to spend (on average) to get different double multipliers and how much you would gain. For example, if you spend more than 88,618 units on double or nothing (without cashing out), there is more than a 50% chance that you would get a x16 Double (1,638,400 units) 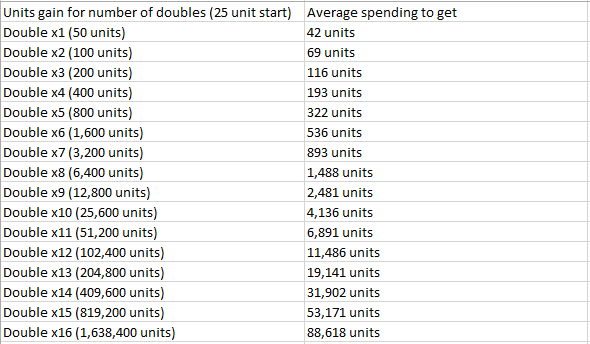 I would just like to point out that I made the assumption that the probability of getting a double is constant. This is likely not be true. I did notice that getting a double gets harder as you double more. I tallied the number of doubles I got for each double multiplier, but getting the data for higher doubles is difficult and time consuming and I do need more data to be confident. Here is what I got:

lmao
i thought it would be losing in general, i used to play this and lost more than 30k units but not even x14.

You’re way overthinking this. Just because u got double 59% of the time in that session, doesn’t mean it’s not a 50% chance to double. Just means you got lucky.

If you flip a coin, you have a 50% chance of getting heads. If you flip the coin 10 times, you aren’t guaranteed to get 5 heads and 5 tails. You could get really lucky and get 10 heads. That doesn’t mean flipping a coin has 100% chance to land on heads.

Yeah, I doubt that the odds are anything but 50/50. The devs previously described Double or Nothing as “pure, concentrated gambling”

Lets test the null hypothesis that it’s always a 50% chance to double:

We reject the null hypothesis

So its extremely unlikely that it is 50%. You can try it yourself. Go to the double or nothing machine double once and cash out. Do that over and over again and you will find that you’re getting significantly more doubles than nothing.

i think having it above the RTP is intentional to get people bet further.

Lets test the null hypothesis that it’s always a 50% chance to double:

We reject the null hypothesis

So its extremely unlikely that it is 50%. You can try it yourself. Go to the double or nothing machine double once and cash out. Do that over and over again and you will find that you’re getting significantly more doubles than nothing.

Considering I have no earthly idea what you just said, I’m just gonna assume you know what you’re talking about and agree with you. Lol 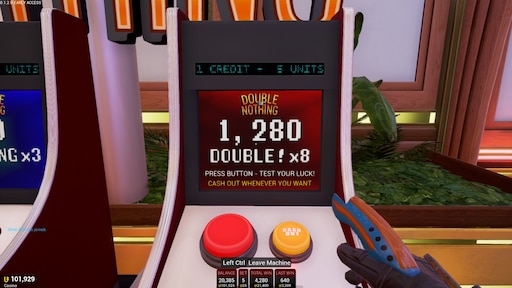 Steam Community :: Guide :: The fastest way to earn units in all of Tower

The #1 method to achieve the highest Units per Minute to make loads of Units....


the question is also how much time you are willing to spend.
(double or nothing part)