The bowling alley is nice and all for doing very basic bowling, but I was thinking, what if you expanded bowling into its own game with unique levels and gimmicks, like minigolf or ball race?

The main inspiration for this idea is a phone game I play called Bowling Crew by Wargaming Group Ltd. 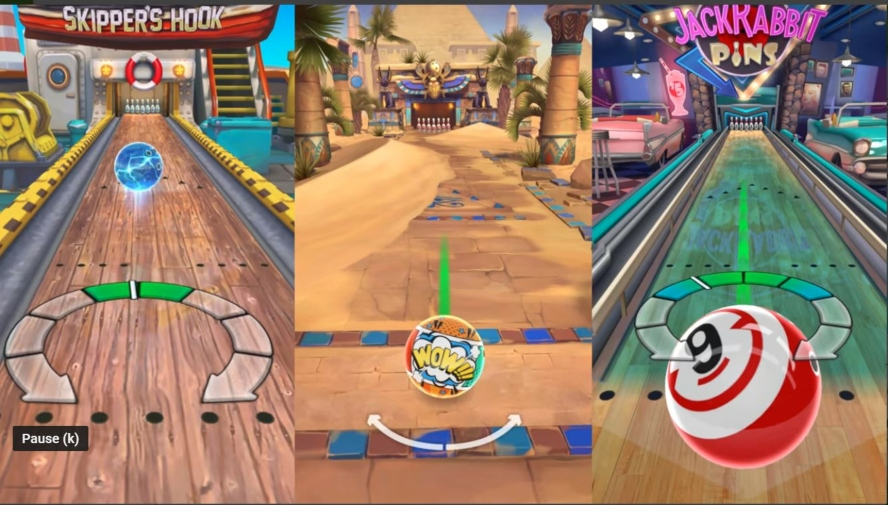 My idea is called “Black Hole Bowling” and it’s an expansion on the basic bowling game into a game you play via the Game Portal. The concept is that you travel to different planets to bowl on elaborate and wacky alleys with unique conditions, such as:

-an ice planet where the alley is a bendy ice alley, so you have to angle your shots and take the lack of friction in mind to hit the pins. Snow banks on the sides of the alley could also slow your ball down and stop it completely, resulting in a gutter ball.
-A sand planet besieged by wind storms that’ll alter the trajectory of your ball and the pins are in motion so you have to time and angle your shot carefully to hit them
-An outer space alley where you launch bowling balls down the curving rings of a planet
-A starbase where the alley has a teleporter with an exit portal that aims at random places, and you have to time your roll to hit the teleporter when it’s aimed dead center at the pins.
-A jungle planet where you have to launch your bowling balls into the mouth of a plant monster and destroy all its teeth.
-A canyon where you have to leap your ball over a gorge to hit the pins on the other side of the cliff.

These are just a few suggestions but I think there’s a lot of potential to this idea. Basically minigolf can cover a wide range of themes for its courses so why not bowling?

Dude, I loooooooove Bowling Crew. I doubt it’ll happen but I’d like to see it.

the maps are a great idea, but if they do add this i hope they also keep the regular bowling in the plaza