EXP and Milestones for Getting Fatal Errors

I think a nice way to make fatal errors a little less frustrating is to give EXP and milestones for getting them this isn’t a joke, I swear. Every time you get a fatal error, you’ll get some EXP. This could get you nice items, like a gun that fires fake fatal error messages, an ERROR model, or even an item that gives condo items dev textures (like the gold watch backer item).

I get your points, it would be a bit difficult to get the items. Maybe just an achievement for getting a fatal error or a stat for how many you’ve gotten would be better. (I would like those items though, maybe as purchasable items at the stray or something?)

I’d never get this achievement then

yeah I havent actually had the game crash in a long time, I’m pretty happy with it.

not sure if this needs to be a thing though

Time to join @Drrabbit’s condo over and over again.

i personally feel that you get units only, and the crashes have to be unique (not the same error / scenario)

I get your points, it would be a bit difficult to get the items. Maybe just an achievement for getting a fatal error or a stat for how many you’ve gotten would be better. (I would like those items though, maybe as purchasable items at the stray or something?) 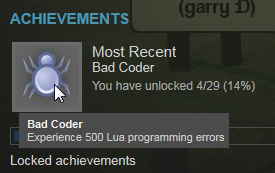 I kinda do like the idea of getting some EXP/Units to compensate for a crash, it would lessen the frustration a bit, but I wouldn’t like items or features locked behind game breaking bugs.

But what about the people who don’t get fatal errors at all?

Yeah, and when the word “Mod” is in the name of the game, it makes sense to have those achievements.

I think its funny to have a small achievement for it, but not whole milestones with items and all, more like the Stanley Parable-like achievements or the ‘meet Garry’ achievement which are meant to be rare occasions and just funny

I think it should give a worthless item. Maybe not like an achievement or anything. Something that is of no value would be fine

With Early Access you’ve signed up for getting a buggy product. You’ve implicitly agreed to help make the final product better by giving feedback and reporting bugs. There is no need to get compensation in any form for experiencing a programming error.

That said, I’d be all for gamification of the bug reporting process. If you help out in fixing the bug by writing a good bug report, that is something worth a reward. But not a permanent one like an achievement. Achievements should be possible to get in the whole lifetime of the product, even when it’s been final for years and stable. Some kind of boost like EXP payout sounds good to me. But one that can’t be exploitable so people try to repeatedly trigger bugs on purpose just to earn boosts.

I don’t know how minidump analysis works but I imagine that having more dumps for the same bug might make it easier to find. If the Steam ID is contained in those, every uploaded one for one specific bug could grant one boost per player.

This. We really shouldn’t be incentivizing bugs like that.

I’m against the idea and I think @JohannesDau said everything that I could think of, but while we’re on the subject, I think we could probably use this to boost bug reports. If the game can detect that it had crashed, I’m sure we can implement a little message popup that says “Oh no! The game crashed but with your help we can hopefully fix it” or something like that, along with a link to the crash dump section of the forums.

If players were to get anything from crashing, I’d limit it to like 1000 units. Exp and achievements I think should be left to actual gameplay.

Honestly, I think this would make for a great achievement, if a hidden and reliable way of crashing your game was also introduced along with it (like a joke NPC, or a secret wire in the dev HQ you’d have to unplug- bonus points if it was hidden under Mac’s workstation)