A volume that dynamically changes offset based on the location you entered the teleporter from.

Here’s a diagram to try and show what I mean: (I am neither a mathematician nor a programmer. Pardon the strange notation.) 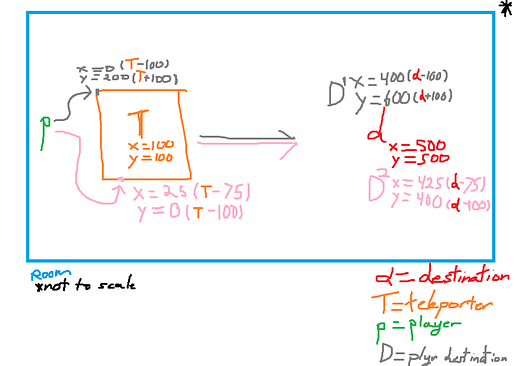 Where p ends up is based on where p enters T volume, offset from d.

This means that the teleportation will be smoother than a teleporter that always teleports p to d.

This teleporter volume would also have an option to add or subtract rotation from the players view. Instead of setting rotation from say, 192.2 → 90, we could make it add or subtract from the angle, 192.2 + 90 = 272.2, or 192.2 - 90 = 102.2. This would also make teleportation less disorienting and smoother (give or take with ping and desync) for the person who is teleporting.

I hope my explanation wasn’t too confusing!

I take it as your suggestion would, in layman’s terms, allow seamless teleportations between identically built rooms?