This is an idea that I’ve been pondering about how to make work for quite a while. Essentially, this is a playermodel whose entire texture is pulled from the Internet. Every animation and possibly sound effect could be brought in from the Internet somewhere and used in-game, allowing for players to play as 2D characters, such as those from retro videogames.

How to make them rotate and work in a first person environment is one of the tricky parts, but I’ve drawn up an image to help explain my idea better: 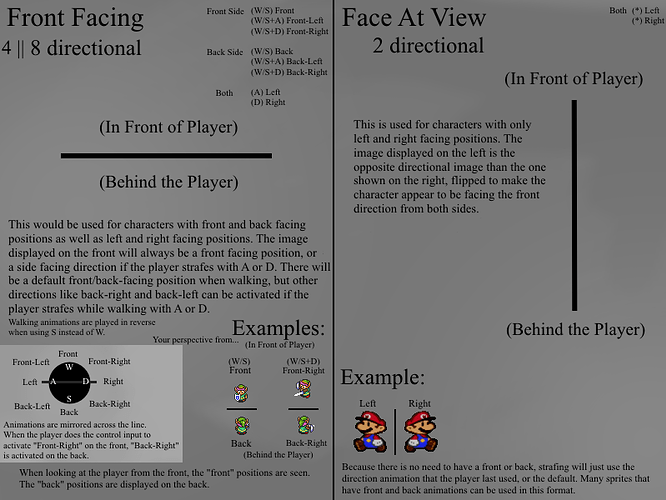 Using this, the issue is now handling 3D objects that the characters hold, such as the confetti gun. However, if certain limbs of the characters, such as arms, would be dynamic (not tied to the same image as the body of the character), then it would be a matter of knowing where to position the arms so that they grab the 3D object. Other things, like accessories, will need to be moveable by the player manually at some point. A more interesting alternative is to have the option to hide 3D objects entirely - make them invisible - so players can manually draw whatever object a 3D character would be holding into the hands of their custom 2D character.

Furthermore, there needs to be a way to actually get the images in-game. Because I want this playermodel to be usable in any situation, I can’t just bundle a bunch of images together in the mod itself, because that would limit the player’s options. Perhaps there is a way to use a bunch of sprites lined up in a grid from an image from the Internet that the player can assign to different “limbs” of the playermodel. Sounds aren’t nearly as big of a concern, but playing short .mp3 from the Internet could be simple.

Players would need to customize the animations, the textures, and possibly the sounds to get a fully functional 2D sprite playermodel in a 3D first-person world. There will need to be a menu for customizing where items are held, and what the custom playermodel should look like, as well as include any idle/walking/jumping/falling/crouching animations that may be necessary. A specified template will need to be used in order to get this to work and to make the sharing of sprite playermodels easy.

Finally, there’s bound to be that guy who uses an inappropriate image for their playermodel. They are subject to that Unranked server’s rules, and whatever condo host can easily kick them from their condo. There might not be any further action necessary, but hopefully the Parental Controls are able to block any access to any type of image globally in-game.

I believe I've covered everything that I needed to cover. If there's an issue, I can think of a way to work around it. I'll work on this once I know for certain how custom playermodels will be handled.
13 Likes
ToxicBoo May 9, 2016, 8:05am #2

This is a really interesting idea. Considering if this would work reliably, I could make a Boo 2D player model.

I really like this idea, I’d love to be able to use something like this one day to make a few silly little player models

Note that this is still work in progress. This is also a proof of concept that you can have animated transparent two-sided seperate textures downloaded from the Internet.

I’m fairly certain that players can use spritesheets of any dimensions and sizes, but I’m using 128x128 16-frame 1-column spritesheets for testing purposes. There will be more materials for other animations that can be performed in-game, such as jumping and crouching, etc.

I will work on the terrible direction detection, the multiple unnecessary image downloads, and try to make the transparency fade smoother, but other than that, there’s not a whole lot left until Workshop playermodel support is added where I can develop it further and (hopefully) implement settings to allow players to tweak their playermodel however they would like.

I probably won’t release the addon until parental controls are implemented. However, even then it will still be up to the server/condo owners to decide for or against using my addon for their Unranked server/public condo, and up to those same people to make sure nobody uses inappropriate textures.

I’d imagine that people would make rules against inappropriate skins, similar to the rule in GMT concerning custom skins on the Blockdude playermodel.

This is a neat idea.
If it’s possible, I would love to see it.

I’ve managed to fix the terrible direction detection and all of the unnecessary image downloads.

However, it has come to my attention that it is impossible to actually tweak the animation speed and the format of the spritesheet during runtime. The workaround to this is that players must supply even more image URLs than before, for the reverse animations, and that they must use a single template (perhaps a 4x4?) for their spritesheet animations for their custom characters… meaning that players will need to use all of the frames and compensate for the set animation speed.

I’ll look for ways around this, but for now just realize that to have a custom character in-game, you’ll need a lot of image URLs that can load quickly.

EDIT: It turns out that you actually can set parameters during runtime for animation speed, columns&rows, and other things like emissivity. Don't worry, you no longer will need to create animations of the same size, shape, and animation speed. I'll even let you customize the emissivity of your sprite playermodel!
Blodimitthar March 30, 2019, 7:34am #9

That would be really cool! I’d love see a Madotsuki from Yume Nikki w/ the little footstep sounds

Who cares? At least he’s contributing to the thread. Nothing wrong with that.

It has been quite a while since I made this suggestion, whew. Much has changed since then.

While it would be great to have more customization for Workshop player models like this, to implement the feature would surely consume more of the developers’ time than necessary. There are already some great 2D sprite characters on the Workshop, albeit they lack the proper animations from their source material. Features like footstep sounds would help customization, but that could be generalized for any type of Workshop playermodel.

Regardless, it would be nice to see 2.5D playermodel compatibility with the Tower Unite Workshop; it could open up more creative possibilities.

Are you sure this is going to work?

This video is not available

This was years ago when I had the notion that I could do anything, haha. Whatever work I made back then was an embarrassing prototype, unoptimized and easy to reconstruct. Tower Unite currently does not have systems in place for using whatever it was I made back then.