I have some concern about condo fishing. Since we’re allowed to macro in our own condo because it’s our own server, someone could potentially make a script to afk fish without anyone knowing. I know the devs have said in the past that they don’t want any way to make units in condos, but how come fishing gets an exception? This might just be me worrying but I haven’t seen this brought up anywhere.

EDIT:
My main concern is people making pixelsearch scripts in private condos since they aren’t moderated

this is a very interesting concern, but as far as money goes fishing isn’t really profitable at all (even with just the lure!), the real problem would be macroing for exp.

if someone does manage to figure out that complex of a script though, one that throws the rod, moves to the fish (or just waits for it even) , hooks it at the right time, AND follows the bar faithfully (which different difficulties take different amounts of time to catch) then that’d be pretty fucking insane

I’ve played other games where this happens. People make some impressive scripts just to afk fish. I’ve made about 4mil since fishing came out just from the treasure hunt and fishing alone, so doing that 24/7 (minus treasure hunt) would be pure profit for no time spent

I’d believe it when I see it honestly. How would a macro perfectly follow that bar that moves randomly every time? How reliable would it be at even hooking the fish in the first place since you have to time a click just right (and at random intervals) to hook one?

It wouldn’t be a macro, it’d be a script that could track where the line is. The bobber is found with a pixelsearch which would also be able to play the minigame for you every time. There’s plenty of WoW videos on this which go into more detail. I don’t advocate cheating, I just wanted to explain what i’m worried about with condo fishing

It wouldn’t be a macro, it’d be a script that could track where the line is. The bobber is found with a pixelsearch which would also be able to play the minigame for you every time.

I guess so? Using a macro is fine in your own condo since it is your own server. Even if it wasn’t allowed it would be difficult to moderate it if they have their condo private

I think you misunderstood me, you described a macro while saying that it wouldn’t be one.

A script tends to be a lot more formally defined, with a well-defined scripting language behind it, while a macro is usually something more simple and ad-hoc.

while a macro is usually something more simple and ad-hoc.

A programmable sequence of instructions/inputs/commands such as keystrokes, keypresses, text or other things. Sometimes into a sequence of preset outputs, or to reach a certain output

My concern about condo fishing still stands either way. It would be possible to do especially since condos aren’t moderated 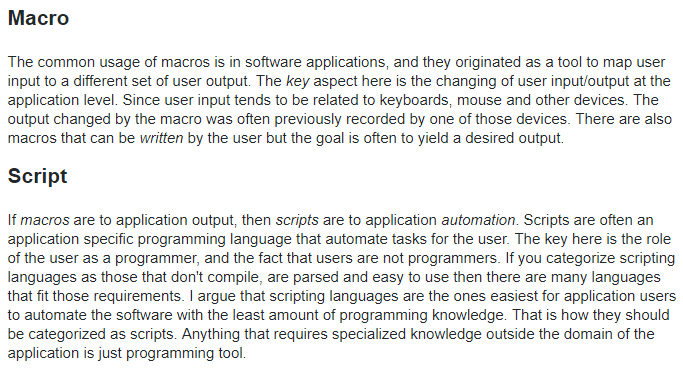 For anyone else wishing there had been a source for those dictionary textblocks: Here.

I’d guess that in the context of Tower Unite, it doesn’t really matter if it’s a macro or script, it’s about the automatization.