Back in the Halloween update, players from other servers were ghost, which allowed you to see in which direction they were looking, which made it feel a bit more real than the current particle. While a playermodel might not work out, maybe they could be changed to these guys (or a lower poly version due to the amount of robots there would need to be): 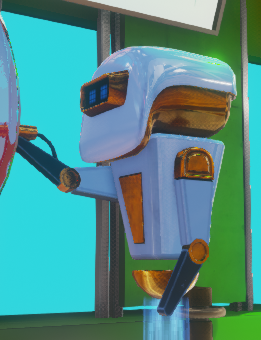 but i think this would be a really cool idea, especially when people have pretty decent computers that will want this, i know in discord earlier someone was talking about being able to see other people models since the plaza feels empty with tiny particles, but the animation and such wouldn’t work but a robot just floating like that and not needing any animation really would be a perfect way to fill up the lobby not be too laggy for people who choose it!

I’m up for ghosts honestly. They just make more sense. But still yeah the particles for other players is a boring solution.

I wouldn’t mind a way to choose honestly. Would add a little bit of customisation to your ghost.
Be it halloween ghost, wisp, robot, etc. Could expand upon it easily enough.

Honestly I really like the flying wisps as a representation, but maybe they could have a brighter glow in one direction or something to indicate where they are looking?