Bring VR to tower unite (i know it's too early now)

I mean it’s not a horrible idea. But it’s one that I feel most players of TU wouldnt be using if it got implemented.

They said they aren’t focusing on VR.

true, but as time passes vr will become cheaper so more people may buy it i’m gonna buy one myself later on but i do get it that not many people will use it

By the time the common consumer can afford VR, TU’s popularity will most likely be down by a load. VR costs arent gonna lower in the next few years, or at-least I believe they wont.

VR thread, my time to shine.

VR costs arent gonna lower in the next few years, or at-least I believe they wont.

Au contraire! The PSVR is the most affordable consumer-oriented VR coming in at $399, whilst the obviously more expensive (but oh-so-much-better) PC solutions are the Oculus Rift at $599 (without touch controllers) and the HTC Vive coming in at a hot $799. However, if you’re into niche headsets, you might be interested in the OSVR HDK 2, at a low $399, for a 2K headset. It’s not bad at all, and entirely open source, but not widely supported either.

I’ve played Tower in VR, back when it was not blocked natively, and it’s a really cool experience. Virus is much more fast paced and fun, and just walking around the boardwalk was absolutely breathtaking. You don’t know how absolutely massive the tower is without seeing it with your own two eyes. Exploring people’s condo is super engaging and everything they build is stunning. (JesusFreak’s condo is crazy insane).

Would it work in VR? Sure. Is it easy? heck no. Lots of things would have to be redone or rebuilt, and in some cases entire gamemodes would have to be reimagined with VR in mind (Ballrace was abysmal in VR, unfortunately), not to mention an entire UI overhaul just for people with VR headsets, because the current main menu is literally plastered to your face.

If you want info on TU in VR (because it’s been discussed QUITE A BIT (especially by me)) see these threads:

Ok, so- [image] Yeah, that’s what your thinking. The DK2 works with the Alpha demo out of the box. I just thought to myself “Huh, that guy on facepunch got good results by just leaving it in direct mode. Wonder about…” Wasn’t expecting it to have head tracking or rotational movement, but it did. My xbox controller even started working to some extent. Everything works perfectly. Except the judder, but I’m sure after some optimization that will go away. So, I’m gonna make a video sometime …

Is there a way to force VR in Tower Unite? Questions

Before VR was disabled entirely because of launch complications with the Vive and SteamVR, I could launch TU with my rift turned on and it would boot in VR. It was great fun to go and see people’s condo creations right there in front of me, or to go around on the ferris wheel and see the sights, or fly to the top of the map and fall… …I quite miss it. I really miss it, actually. So I was wondering if it’s possible to force the game to boot, using Oculus runtime or something.

Okay, I know this may have been suggested before and might even already be on your check list. But let’s get down to the type of Virtual Reality. There will obviously will be Vive and Rift users. But I have this VR headset made by Razer so called OSVR it’s a development kit. It’s able to use Steam VR since Valve is aware of it’s existance. However it is unable to use certain apps because it has no motion controllers. It’s a plane headset with a tracker (unfortunatly my trakcer may be broken) so …

When can we expect VR to be enabled again? Questions

VR isn’t a priority for the game at the the moment, and it is unknown if the feature will return in the future. When we were originally planning VR support, the VR landscape was a very different beast than it is now, and we would have to fully re-do complete sections of the game to support it. Because of this, VR support isn’t our main focus, and while it could be added in a later update, there is nothing official on the pipeline at this time.

Especially see this one:

Although we’ve talked about VR support in the past, it’s something that’s going to need to be re-discussed going into the future. At the core, yes, it’s completely possible for us to integrate HMD support. It’s already integrated at a basic level. It sounds awesome, why wouldn’t you want to be put into a world like this? But here’s the thing—when we talked about integrating VR into Tower, “room scale” wasn’t even common terminology, it was back in the day when people thought you could just tac…

Au contraire! The PSVR is the most affordable consumer-oriented VR coming in at $399, whilst the obviously more expensive (but oh-so-much-better) PC solutions are the Oculus Rift at $599 (without touch controllers) and the HTC Vive coming in at a hot $799. However, if you’re into niche headsets, you might be interested in the OSVR HDK 2, at a low $399, for a 2K headset. It’s not bad at all, and entirely open source, but not widely supported either.

I understand that, but I only count PC VR in this topic, as that is all that can be used. Frankly I plan on building a pc this year, more likely this christmas to prepare for VR. Most likely Oculus since sadly I dont have the room for HTC Vive. I mean I dont have hte money for either right now, but that why I say preparing.

Just the opinion of Mr. Cakemagic here, but in hindsight I wish I’d have gotten a Vive. More games for it, there’s no extra storefront, and the tracking is waaaay better. Even if I’d only use it for seated experiences, I’d rather have a Vive. There’s even a thing going on called Revive, that lets you play Oculus exclusive games on the Vive. Plus the controllers are really good.

In all honesty, whatever headset you get you’re gonna have fun with, VR is a really cool experience any way you look at it.

Yup, the extra storefront seems like it’d be annoying, I tried the Oculus at my bros, before he got the oculus touch.
But yeah, Vive still needs alot of space for it to be good at all, or even be used in the slightest, so if you dont have a big enough room, there’s no point.

As a VR user, I wouldn’t bet on it. There were talks of it back on the Indiegogo, but from my understanding, there was an Unreal 4 patch that prevented them from implementing it in the current version of tower. I could be wrong, but it seems like it was much more of a priority a year ago before TU was funded. 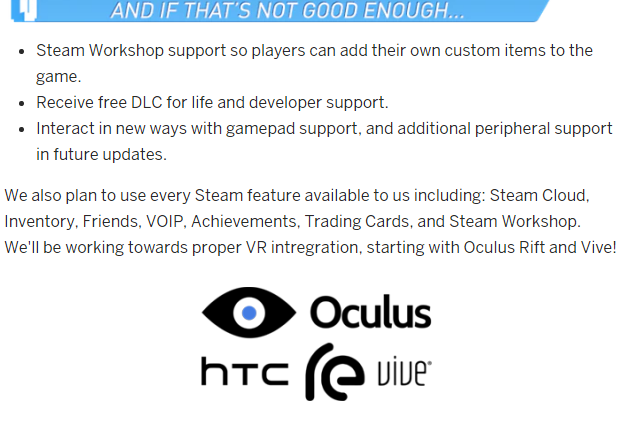 I think that was cancelled a while ago ^

The verdict was that VR had changed quite a lot since the initial announcement of TU, and using it then was very different from using it now. In essence, the game has to be designed around VR from the get-go. TU was not designed for VR; VR was meant to be a fun, nonessential addition to TU. Hence, there are problems in adding VR to TU that were not known back when TU was announced.

The last two posts Cakemagic links to provide far more details (and are from the devs rather than some random fan) than what I’ve just said.

I honestly find “VR” to be pretty pointless. It’s just another way of looking at the game, and a pretty cumbersome one at that. You’re not in a virtual world, you just have two monitors strapped to your face, controlled by your head’s movements.

You may look at it that way, and just as a gimmick like I did. But it’s different, and tonnes more immersive once you actually try it.

Video games are only as immersive as you make them.

Here’s the thing, how many of you hate VR but have actually tried it?

Go to best buy, they’re demoing PSVR and Oculus there on most weekends at several locations now. I was pretty cynical like you until I tried it. It’s not just “Another way of looking at the game”, it’s a way to physically have a presence in the game. It doesn’t just track your head, but your body’s location and your hands as well. The kind of VR you described would be more like the Samsung GearVR, which doesn’t have body tracking. It’s much more static and is quite literally a screen split down the middle that only tracks your head’s movement. All I’m saying is don’t knock it until you try it.

Completely, utterly agree. I was extremely skeptical and just brushed it off (while being jealous, since the htc vive still looked masively fun with its hand controls)

But my god was I immersed, even while just using the oculus and my brothers, without the oculus touch. It was amazing

I honestly find “VR” to be pretty pointless. It’s just another way of looking at the game, and a pretty cumbersome one at that. You’re not in a virtual world, you just have two monitors strapped to your face, controlled by your head’s movements.

Have you played a game in VR? I don’t think you have, or you wouldn’t say its “just another way of looking at the game”.

I’ve only tried Google Cardboard but I’ve been hooked and want more. The only problem is my pc is trash. Story of my Life. But yes vr is probably one of the best things I’ve tried in my life. And I’m not just saying that.

I say ‘yes’ to VR for Tower, but not now. The devs are way too full of other things (backer fulfillment, new game-modes, etc.) When development is not at sonic speed, that should be when devs work on VR.