Billiards is a plaza game I can play for hours with a friend. I find it fun, but I think it can be even more enjoyable with some additional ways to foul (and break).

With these new ways to foul, you are forced to come up with creative solutions to the situations you are put in. Instead of plowing through your opponent’s balls to pocket your own balls, you must think creatively on the spot. It also provides for counterplay, where you can purposely shoot the ball to put your opponent in a tough spot.

So far, there is one way to foul in eight-ball:

This is what I would like to see the most. Having fouls can produce some interesting situations. It also allows for some counterplay.

Pocketing the 8-ball when it is not legal will cause you to lose.
This also applies to the break. This means you can lose on your first shot.

Under APA rules, you win. You lose if you scratch the cue ball along with it.

4b. If the 8-ball is pocketed on the break, it is a win unless the player
fouls the cue ball, in which case it is a loss.

It would be cool to win upon pocketing the 8-ball on a scratch instead of losing.

The APA ruleset seems to be much more beginner-friendly and social.

In short, along with some of these rules, it could be nice to let players break from anywhere behind the head string (the line on the left side of the table in the picture below). 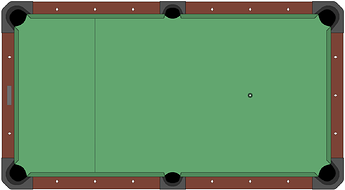