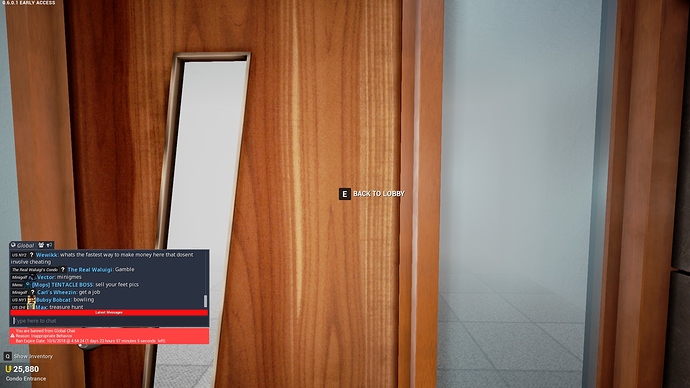 This is where the ban got placed. I was just joking around in the global chat with everyone else. Nobody was harassed or insulted. You can even check the logs from the time of this post to prove that. Apparently telling jokes and having a good time with the other people in global chat warrants a two day chat ban.

Makes me super confident about the moderation expansion you are planning. Telling jokes that are “inappropriate” deserves a chat ban from an adult game where other people were joining in. Pretty absurd.

For context you mean when I said (((ranch)))? People were making legalize ranch jokes in the public chat (its an eric andre skit) the context of me making that joke was to place ranch as a conspiracy. At no point was that an attempt to denegrate Jewish people.

Is context worth nothing?

EDIT: For context I’m not making this thread to try and fight the ban, it’s your game, I just think the basis is silly, and given the context all I did was make a joke that wasn’t targeting or harming anyone. Seems pretty unfair to equate that to anti-semitism.

To add on to this, your previous ban was less than 24 hours ago and it was “jokes” about furry suicides.

I’ll admit I got a bit out of hand on that one. I was sick of all of the constant furry self-promotion and I said some mean things in response, got a chat ban for it, fair. I didn’t make a thread about that.

That doesn’t make it any more just to then hand out bans for something that isn’t really justified. Anyone looking at me saying (((ranch))) in that context can immediately tell its a joke and not targeted at anyone. The same response wasn’t necessary, it was a conspiracy joke.

I would be mindful about how others might see messages, and we keep track of players who have been recently banned to make sure they are sticking with the rules.

I appreciate that you’re the kind of person who can actually discuss these things as opposed to just locking this discussion outright, so let me say this; I get why you’d track people, I get not everyone shares the same sense of humor.

With that said, I now have a two day ban because of a single worded statement that a dev felt was in bad taste, despite the fact there was no malicious context, and the surrounding posts + my posts before in the day clearly show it was a joke. It wasn’t even something that could be construed as targeting someone.

Given that this feels unjustified, and worries me going forwards in the greater context of this games moderation. If this is the standard for inappropriate behavior a lot of people are going to be scolded for telling jokes. This seems excessive especially when if someone actually doesn’t like me making a joke with brackets they have every means at their disposal to mute me permanently.

Whatever happens or doesn’t happen in regards to the chat ban I was given please don’t let your game go down that route. On this occasion this action wasn’t called for as far as I can tell, and if this repeats itself with other people it will kill the once open and fun vibe this game had going for it.

Triple parentheses or triple brackets, also known as an (((echo))), are an antisemitic symbol that has been used to highlight the names of individuals of a Jewish background, or organizations who are thought to be owned by Jewish people. The practice originated from the alt-right blog The Right Stuff; the blog's editors have explained that the symbol is meant to symbolize that the historic actions of Jews had caused their surnames to "echo throughout history". The triple parentheses have been Us...

It’s not really a general conspiracy joke, it’s actually quite insidious and gross. I’d reconsider using rehashed /pol/ humour in the future without actually considering the meaning and what it could represent to other people who might be reading global chat. Since only global is moderated it’s hardly that restrictive. No one is stopping you making all the “edgy” jokes you want in your condo local chat.

It’s not really a general conspiracy joke, it’s actually quite insidious and gross

Only for the people who make it so. Parenthesis are always just that, no matter how many you use.

<— This is also a racist gesture now if you listen to the idiots on the internet, should probably remove it right…?

Don’t mind me, just leaving this thread before it gets locked.

like a jokes a joke and if people get offended by it they should just block the person, now if he was saying it with meaning, which he wasn’t, then there would be reason to ban.
also if other people are going to tell us that if we want to make our jokes we should do it in local, while they can use their humor that i hate in global then i think that is a bit rude.

also 1 note, i can’t easily find any rules for global chat ingame, so i think that is what makes the ban here worse, we can’t easily ingame find a way to know the rules. so if it isn’t out there easy for us to know then we don’t know what we are allowed to say or not, (i still dont know the full rules of global) 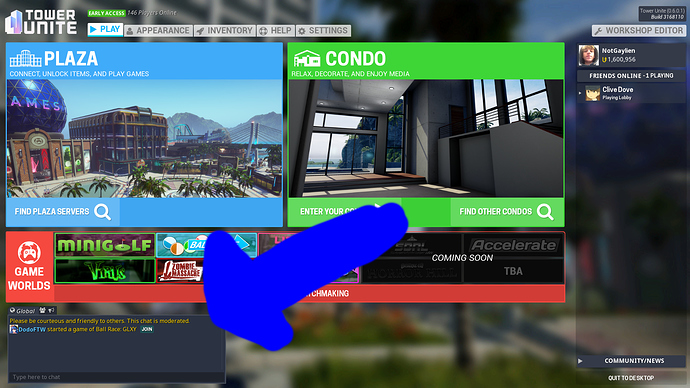 A rules UI will be added soon, for now you need to follow the general rules of our Discord for how we’d handle Global Chat.

Any ban repeals should be sent by PM only.