A Server for the North East

Ladies, gentlemen, and non-binary nobility, I am proud to introduce Ironopolis.

The server is designed for players of Tower Unite located in the UK or close-by European countries. It can hold up to 128 players although I have no idea how well my internet will do with that many people on at once.

The official Steam group is at http://steamcommunity.com/groups/tu-iron# and the server’s designation in the server list is [UK] Ironopolis. Have fun!

Nice! It would be nice if the devs could organize a stress test where the bandwith usage is tested in various situations. Could be done by the community aswell. It only requires people who actually own the game.

(again thx for testing mine, i’ll check out yours once i own the game)

Just curious, where did the name originate from? 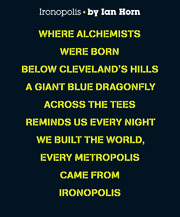 This poem is painted on a wall that I pass by every day on my daily commute. Middlesbrough is a heavily industrial area, and is known for exporting iron and steel (although the local steel plant shut down recently, so that’s a bit up-in-the-air right now). Ergo, the poem refers to the area as Ironopolis, and I’ve always thought it was kind of profound.

Is it supposed to say “Tees”?

Yes, the river the town is built around is callled the Tees River. Also, that’s the exact wall I pass every day!

I live in the North East of England, so this might just steal my attendance away from @meharryp’s server.

I live in Leeds and my pings to my server are lower, just sayin

Yeah but my server doesn’t make people put up with the Discord chat (smug, smug)

Don’t fight over me ahah
I’ll probably frequent both depending on the pings and how many people are around.

No need to fight over those two servers when I am clearly right here.

Yeah, mmkay. We’ll see what happens when United Lobbies implements new rules that not everyone agrees with and all your servers go into chaos because of it.

All rules on the servers follow the exact same rules of GMT. We aren’t strict, we just want our members to not be harassed.

Not the exact same rules, from my own once-over of them. Yours seem a little more lax, actually. But I mean, I’m all for strict rules, I just don’t want to have other people complain about them, which is why I plan to stay independent.

I am making sure the rules I use do not prevent members from having fun, but instead, protect them.

You too! I love the name to be honest.

I visited Durham School as a boarder for a year. The North East is the best part of England for sure ;D

The North East is the best part of England