A Machine Reminiscent of "Raging Ape"

In thinking back on arcade machines I have played in the past that are rather unique in some way, I recall a “Raging Ape” machine that featured two metal bars you would grab on to, and they would shake rapidly and ‘violently’ in your grip. It made your hands feel super weird, and the game went on as long as you held onto the bars. It was oddly difficult! 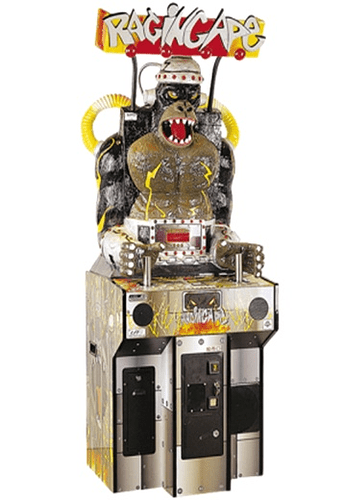 As for gameplay, two “Grip” meters on the left and right of the screen would need to be kept above a certain threshold. To simulate the firm grip needed to continue the real machine. Both of these bars are filled by mashing the QW OP keys; QW filling the left bar, and OP filling the right. The bars would need to be filled high enough to keep the machine going, and it can keep going for as long as the mashing can be kept up.
There could likely be a hard limit of around two minutes, more tickets being paid out depending on how long you kept the machine going.

The idea is rather unique in the real life counterpart, I think it would be equally as interesting and charming in the Arcade.

Sounds like a great idea to me. Maybe have 2 bars that you have to keep in a zone, kind of like the grind balance in THPS games? The longer you go the more difficult it is to keep them both centered?