[5.1.0] Bullets are attracted to the helicopter for some reason 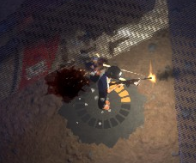 The bullet line thingys are bending away and hitting the side of the helicopter.

It’s because you’re standing inside the helicopter’s hitbox, and the bullet traces itself from the gun tip to the center of the object that it hit. On a zombie with a small hitbox that’s fine, but a large one like the helicopter it’s pretty obviously wrong.

I think the real bug here is that the helicopter hitbox is effected by bullets, it should really just be detecting if the players are inside of it or not.

Ya, I know game making stuff.